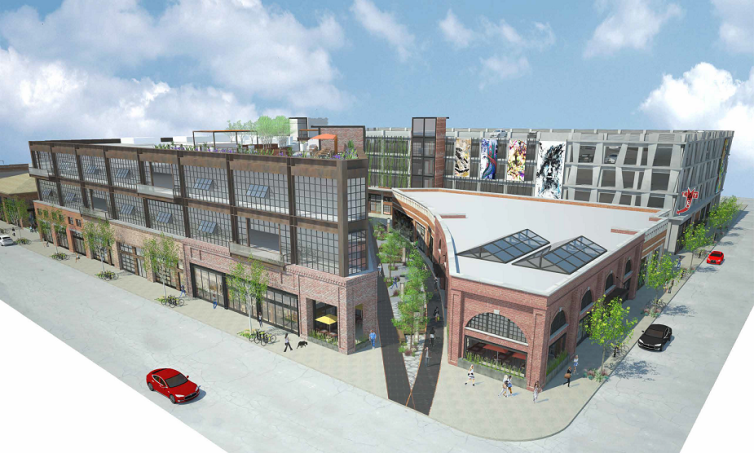 Spotify, known for its eponymous music streaming service, will relocate its regional headquarters to the At Mateo complex, according to an announcement by developers ASB Real Estate Investment and Blatteis & Schnur.

The Swedish-based company will relocate approximately 120 employees from its existing leased space at 9200 Sunset Boulevard in West Hollywood in 2019. Spotify joins another industry heavyweight in the area, Warner Music Group, which will be moving from Burbank to the entirely revamped Ford Factory Building at Seventh Street and Santa Fe Avenue by the end of the year. Spotify declined to comment on its move.

By taking nearly 110,000 square feet of office space at the campus at 555 Mateo Street in the Arts District, Spotify will become At Mateo’s largest tenant, joining USC’s Roski School of Art and Design, which took 16,000 square feet in February, and Soylent, the meal replacement brand with a Silicon Valley cult following, which leased 29,000 square feet last year. Also announced was a 7,000-square-foot lease by Girl & the Goat, the property’s first restaurant. It is the first Los Angeles location for the Boka Restaurant Group and is set to open next year. Blatteis & Schnur said the property, which formally opened in May, is 85 percent leased (including a retail section).

At Mateo has a total of 195,000 square feet of rentable space in four buildings, but the Spotify lease confirms a major shift from the developer’s original vision of the property as a commercial hub: a collection of shops and restaurants to serve the area’s growing residential population, Los Angeles Downtown News reported. The initial plan called for 125,000 square feet of space for commercial uses and just 50,000 set aside for offices.

The district has become a hub for creative office and mixed-use development, including the massive 6AM project by Herzog + de Meuron and developer SunCal as well as high-end restaurants, including Bavel from the acclaimed Bestia team, which opened this spring.