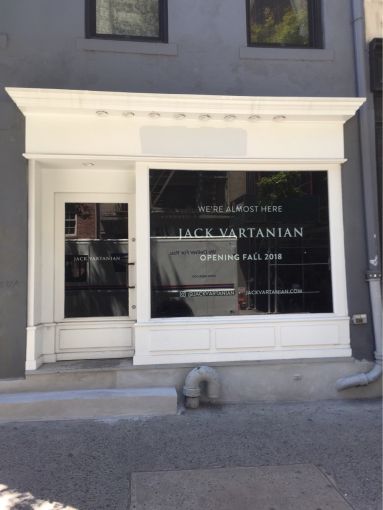 Jack Vartanian, a vintage Brazilian jeweler, is leaving its digs on the Upper East Side for a space in Soho, Commercial Observer has learned.

The store at 146 Spring Street between Wooster Street and West Broadway will span 1,200 square feet indoors—700 at grade and 500 square feet in the basement (for storage)—and includes a 600-square-foot outdoor patio, according to information provided by Isaacs and Company.

“Soho is one of the busiest markets in the city right now, and Jack Vartanian, relocating from Madison Avenue, was the perfect choice for this space with several other jewelry brands on or around Spring Street,” Isaacs and Company’s Trever Gallina, who along with Joel Isaacs represented the landlord, the Conte family, said in prepared remarks. Tyler Boyd of Creative Spaces worked on behalf of the tenant.

Signed on July 16, the deal is for five years with a five-year extension option and the asking rent was $550 per square foot, as per Isaacs and Company.

After 10 years in 625 square feet at 996 Madison Avenue between East 77th and East 78th Streets, Boyd said, “the Soho market pairs well with the direction the brand is going.” He noted that the company plans to relocate in the fall.

Erected in 1910, the four-story residential building at 146 Spring Street has the one retail space, which was previously occupied by L’Occitane.

Updated: This story has been edited to include a comment from the tenant’s broker.