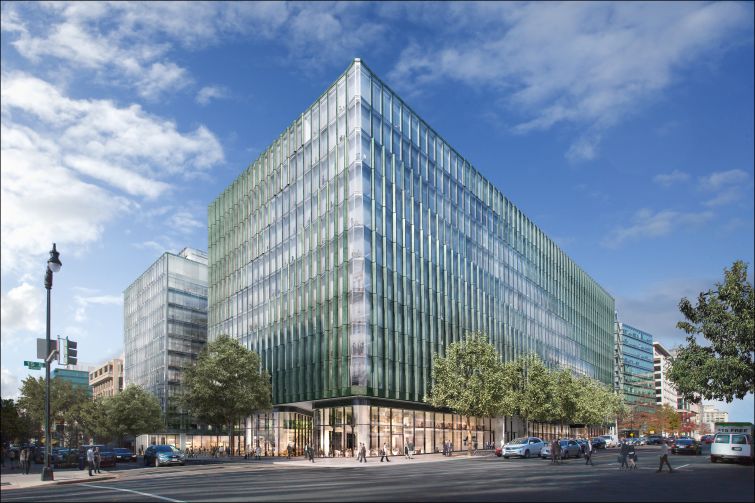 Washington D.C.’s office market experienced a record-high net absorption in the second quarter of this year, according to a new CBRE report.

The healthy demand growth is due in part to the delivery of six buildings totaling 2.4 million square feet, which allowed for multiple sizable tenant move-ins. Fannie Mae’s relocation was among the largest leases with 770,000 square feet of space at Carr Properties’ Midtown Center at 1100 15th Street NW. The financial institution occupies 91 percent of the building.

Madison Marquette and PN Hoffman also delivered a notable project—the final portion of Phase I at The Wharf. The building, located at 1000 Maine Avenue NW, is 79 percent pre-leased with Fish & Richardson and Washington Gas.

Another boost to D.C.’s office market is the expansion of nontraditional occupiers, according to Wei Xie, CBRE’s research manager for Washington, D.C., and Baltimore. The market has long been dominated by government entities, law firms and government contractors, which have been contracting, Xie told Commercial Observer. “Financial services and coworking spaces have been a huge highlight. They have been not only been able to counterbalance the contraction by government supporting industries but even create some net new growth,” she said.

According to the report, seven of the top 10 leases were in the coworking, creative industries and tech and nonprofit sectors, one of which was WeWork’s expansion at 655 15th Street NW. The coworking space increased its Metropolitan Square footprint to 225,000 square feet from 108,000 square feet. Education technology company EverFi also signed a lease for 58,005 square feet at 2300 N Street NW in the West End neighborhood.

The shrinkage of D.C.’s Class B buildings is worth highlighting as well, Xie said, explaining that a significant amount of the properties are being redeveloped into Class A assets in the central business district. As a result, Class B availabilities have begun to tighten with the vacancy rate in the second quarter ending at 9.1 percent Downtown compared to 9.6 percent in the second quarter of 2017. Additionally, Class B rents rose $1.80 over the second quarter from $48.04 to $49.84 per square foot, according CBRE.

Transwestern’s second-quarter report shows Class B spaces increasing from last quarter by 0.7 percent to $45.91 per square foot compared to $44.17 per square foot during the second quarter of 2017. It also notes that the average asking rent for all classes increased 0.5 percent to $52.26 in June from $52.01 PSF in March.

Despite the occupancy gains, CBRE notes that D.C.’s vacancy rate rose to 13.6 percent from 12.9 percent in the previous quarter. According to Cushman & Wakefield, which reports similar overall office growth in its report for the same period, deliveries of new construction and substantially renovated properties are expected to add another 2.2 million square feet to the city’s inventory by the end of the year—60 percent of which has not been leased yet.

For the entire D.C. region, JLL is predicting 2018 annual absorption to reach nearly 3 million square feet, which would be the highest level since 2010.