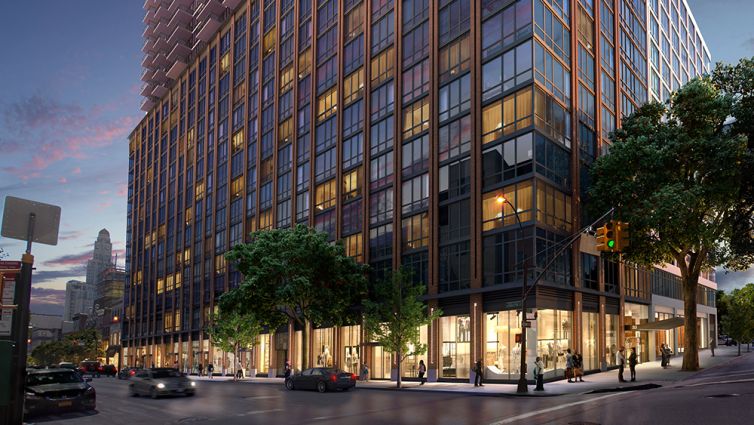 TF Cornerstone has sealed a $267 million refinancing on its modish one-year-old multifamily rental building at 33 Bond Street in Brooklyn, according to records filed with New York City today.

The loan, from Buffalo, N.Y.-based M&T Bank, refreshes a $250 million loan from the New York State Housing Finance Agency from November 2014 and adds $15.7 million in new debt, the records show.

Details about the new mortgage term and interest rate were not disclosed, and a representative for M&T Bank did not immediately respond to inquiries.

The 25-story Boerum Hill tower includes 714 apartments, a fifth of which were set aside for residents on limited incomes, DNAinfo reported last year. The units are split about equally among studios and one- and two-bedroom apartments, and feature well-appointed kitchens and oak floors.

“Our business model is generally to do large-scale, ground-up development,” TF Cornerstone principal and executive vice president Jeremy Shell said. “There are economies of scale when you’re developing and operating a building with, for example, a 24-hour doorman. You can provide a highly amenitized product.”

Market-rate apartments available for rent range from a $2,655-per-month studio to a two-bedroom unit that costs $5,370 per month. A housing lottery last year offered studios for less than $900 monthly. Retail space on the building’s lower floors hosts a coffee shop, a pizza joint and a 52,000-square-foot gym run by the company that owns Chelsea Piers.

The building also features a bicycle storage space, a landscaped roof deck and a recreation room for pets. A block west of Flatbush Avenue, 33 Bond Street stands amidst Downtown Brooklyn’s broad confluence of subway lines, with stations on the A, B, C, D, G, N, Q, R, 2, 3, 4 and 5 trains all within a short walk.