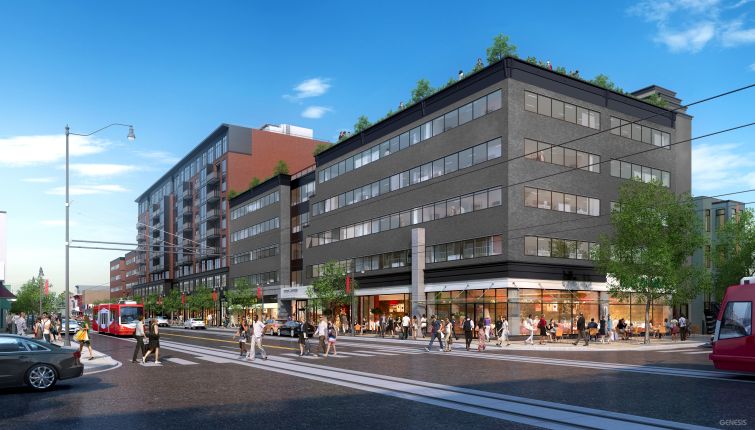 Shared office space provider Bond Collective has signed a 10-year, 30,000-square-foot lease at 609 H Street NE in Washington, D.C. for its first location in the area, according to a Bond Collective press release.

The coworking and flexible office space company will occupy the entire third and fourth floors of the five-story, 90,000-square-foot redevelopment between 6th and 7th Streets NE, which is owned by Jair Lynch Real Estate Partners. The new offices are expected to open in the first quarter of 2019. A spokeswoman for Bond Collective declined to disclose the asking rent in the deal. The asking rent in the building ranges between $49.50 per square foot and $55.50 per square foot, according to CoStar Group.

Bond Collective’s new digs will feature floor-to-ceiling windows and an interior staircase, as per the release. The shared office space provider will outfit the space with plush lounge seating and a variety of common spaces, and each floor will have a kitchen. The space will also have “meeting booths” and high-tech conference rooms, and there will also be a private rooftop with views of the United States Capitol, a gym with locker rooms and bike storage.

“We are thrilled to bring our design and hospitality-focused brand to a new market in Washington, D.C., which is known for its entrepreneurial drive and is home to some of the most successful companies in the world,” Shlomo Silber, the CEO of Bond Collective, said in prepared remarks.

Cushman & Wakefield handled the deal for Bond Collective and Jair Lynch Real Estate Partners. A spokeswoman for the brokerage did not immediately return a request for information including the name of the broker on the deal.

Bond Collective currently has six offices, including five in New York City and one in Philadelphia, according to its website.

The building at 609 H Street NE is the last of three properties that Jair Lynch Real Estate Partners redeveloped in the corridor. It sold the five-story, 82,000-square-foot office building at 645 H Street NE to Intercontinental Real Estate Corp. for $51.4 million in June 2015 and then sold the 307-unit, two-building residential property at 625 H Street NE (called Anthology) to Bentall Kennedy for $160 million in October 2016, according to Washington Business Journal.

“The collaboration with Bond Collective helps us complete our $200 million investment totaling nearly half a million square feet on the historic H Street, creating an extraordinary hub of retail, housing and office,” Jair Lynch, president and CEO of Jair Lynch Real Estate Partners, said in a prepared statement. “Bond Collective speaks to our customer and thus is a perfect fit right next door to the award-winning housing and retail project Anthology.”