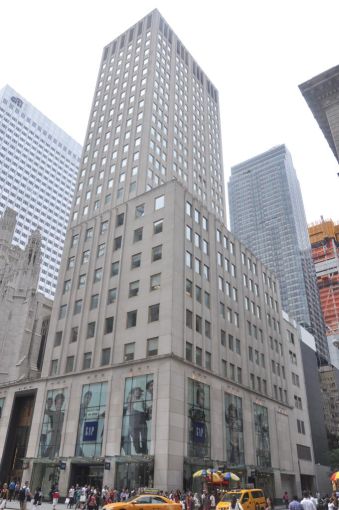 Japanese jewelry brand Mikimoto is staying put in its longtime home at the Buchmann family’s 680 Fifth Avenue in Midtown.

Mikimoto re-upped and reorganized its 25,000-square-foot office in the building in a 15-year deal, according to a press release from the company’s brokers. Its current space includes a portion of the fourth floor and the entire sixth floor. Under the new lease, the luxury retailer will vacate the fourth floor and take over the majority of the fifth floor in the building at the corner of West 54th Street.

The multinational company, which is known for creating the first cultured pearl, first moved into the building in 2000 when it subleased space from the Gap. Asking rents in the building range from the low $70s to the low $80s per square foot, according to The New York Post, which was the first to write about the transaction.

Savills Studley’s Daniel Horowitz, Jeffrey Peck and Kurt Handschumacher represented Mikimoto in the transaction. And JLL’s Frank Doyle, David Kleiner and Harlan Webster handled the deal for the landlord. A JLL spokesman didn’t immediately respond to a request for comment.

“We analyzed several relocation options, but Mikimoto’s ability to remain close to its retail flagship, modernize its space and continue its relationship with a landlord that has served them well for 18 years ultimately weighed in 680 Fifth’s favor,” Horowitz said in a statement. “Following the restack and renovation, Mikimoto’s New York office will be a powerful reflection of its brand and will serve as a strong foundation for the company’s success for the next 15 years.”

Doyle said in a statement, that the building “remained an ideal location for Mikimoto. The surrounding neighborhood offers a tremendous range of sophisticated dining and cultural destinations.”