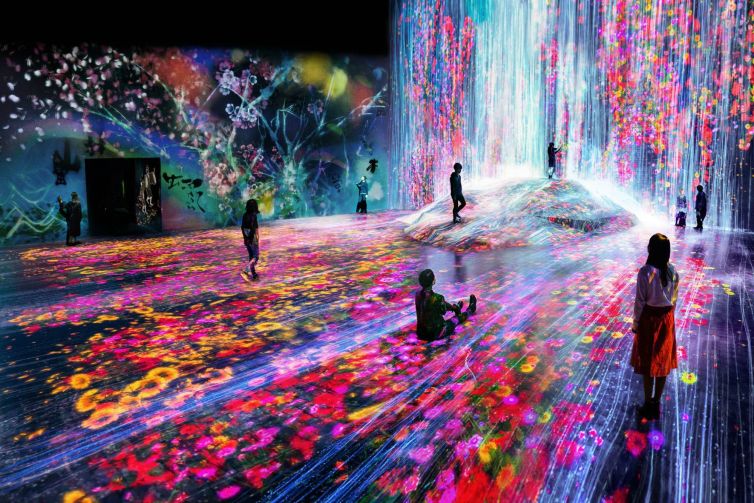 The exhibition pictured, called "Universe of Water Particles on a Rock where People Gather," is currently being staged at TeamLab's Tokyo gallery. Photo: teamLab

The Tokyo-based collective has inked an 11-year lease for a gallery on the ground floor and mezzanine at 51 34th Street, otherwise known as Industry City Building 7, a spokeswoman for the landlords told Commercial Observer. The group will also have control over the courtyard between the two buildings, according to a memorandum of lease on file with the city. Asking rents at Industry City range from $15 to $40 a square foot, and there were no brokers involved in the transaction.

Pace Gallery is partnering with teamLab on the space after exhibiting the group’s work in several locations around the world over the past four years, including Pace’s Chelsea gallery. TeamLab has established a reputation for interactive installations that involve light, sound, video and virtual reality environments, and it employs a large group of artists, programmers, engineers, animators, mathematicians and architects to assemble its exhibits. This will be its first permanent exhibition space in the U.S., joining its galleries in Tokyo, Singapore and Shanghai.

“TeamLab wanted a location in the heart of New York City that was easily accessible, but also cutting-edge in terms of the culture and community,” said Peter Boris, an executive vice president at Pace Gallery, in a statement. “We felt Industry City was exactly that site. The addition of an immersive digital art experience to the existing Industry City campus will be very exciting. This move makes a strong argument that Industry City is New York City’s premiere creative hub.”

“We knew from the get-go that this amazing immersive art experience, which is unlike any other art installation in the United States, was perfectly in sync with Industry City’s creative culture, and are thrilled that teamLab will become an integral part of the Industry City community,” said Kathe Chase the director of leasing at Industry City. “On the heels of Tokyo and Paris, it’s especially exciting to see that teamLab, represented by Pace Galleries, chose Brooklyn for its next big City.”