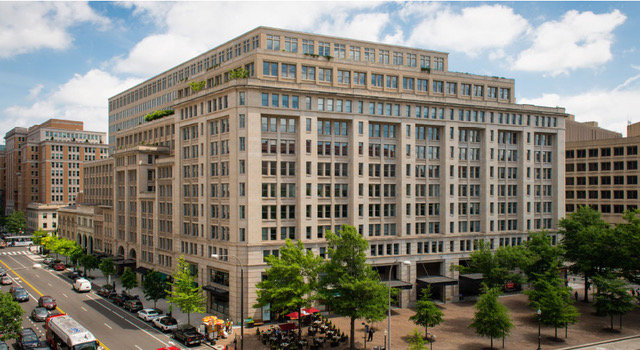 Carlyle has been in the building since December 1993. The company currently occupies space on the second and third floors of the building, which is owned by TH Real Estate, according to a JLL release. It will expand by 70,000 square feet across the fourth and fifth floors.

“This move is all about collaboration and efficiency,” Carlyle Global Head of Operations Christopher Finn said in an email to Commercial Observer. “Bright, modern, well-organized space will better enable people across groups and levels to work together in service to our investors.”

The deal “underscores the uniqueness of this monumental property, its location and the value of the renovations we have planned for 1001 Pennsylvania Avenue,” said Vadim Goland, a senior director at TH Real Estate, in a statement to CO. The real estate company has committed to renovate the lobby and fitness center.

JLL’s Gregory Lubar and Steve Spartin represented The Carlyle Group in the deal. The 11-year lease begins in 2019.  “We knew that by expanding at 1001 Pennsylvania, they will most certainly benefit from not only its premiere location in the District, but also the commitment and investment of the building ownership,” Lubar stated in a prepared statement.

Carlyle’s Virginia-based employees are expected to move into the building in 2019, according to a JLL spokesperson, who would not disclose the asking rent. This will allow all 650 of the company’s D.C. region employees to work out of one building.

TH Real Estate acquired the building in December 2004 for $461.3 million, according to Costar. Other tenants in the building include Crowell & Morning LLP, Ernst & Young, and Clark Hill.