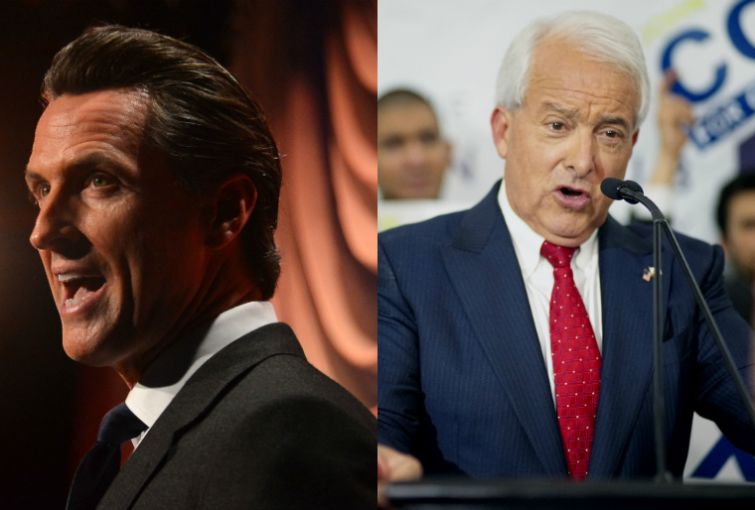 Liberal Democrat Gavin Newsom and Trump-backed Republican John Cox will face off in the November general election to decide California’s next governor.

The two emerged as the top vote-getters out of an unwieldy field of 27 candidates vying for the governorship in the state’s unusual “jungle primary system,” where the top two vote-getters—regardless of party—advance to the general election, as CNN reported.

For Commercial Observer, though, the big question is, What does it mean for real estate?

As with the leader of his party, Cox has a real estate background, and one of the biggest concerns of voters is that of affordable housing and the homeless question.

Newsom, 50, the former San Francisco mayor currently serving his second term as California’s lieutenant governor, is the expected frontrunner to Cox, 62, a multimillionaire real-estate investor, recently endorsed by President Trump. But, as seen in the 2016 presidential race between a political insider and businessman, “never say never,” Sherry Bebitch Jeffe, a senior fellow at the USC Price School of Public Policy and expert on California politics, told Commercial Observer following the primary results.

While she said it was too early to review specific agendas of both candidates, given each contender’s overall stance and statements during official debates and on the campaign trail, including during their acceptance speeches on Tuesday, Bebitch Jeffe hazarded a few predictions.

“I boil it down to what each of the two men said yesterday,” she said. “Newsom’s catch phrase was ‘resistance with results,’ Cox’s catch phrase was—I may be fudging a couple of the words, but—‘We put a businessman in the White House. Let’s put a businessman in the governors’ mansion.’ That tells you a lot, and that’s about all we know quite frankly.”

Given their backgrounds, Bebitch Jeffe expects Newsom to turn more to government solutions to pressing statewide issues like the homeless and affordable housing crisis, while Cox will likely turn more to private-public partnerships and volunteer efforts.

Leading up to the primary, The Los Angeles Times provided an overview of each candidate’s proposals. Among those touching on housing and real estate climate, Cox set a goal for developers to build 3 million new homes over the next 10 years. He has stated that California needs to reduce regulations on builders, including replacing its primary environmental law governing development, the California Environmental Quality Act, with a less comprehensive measure.

Newsom meanwhile wants developers to build 3.5 million homes from when he takes office through 2025, which the Times pointed out would be an unprecedented building boom compared with modern California history. He wants a fivefold increase in a state tax credit to finance low-income housing, bringing the state budget cost to $500 million a year.

Newsom also supports eliminating regulations that he contends make it difficult for developers to produce middle-income homes. He has expressed an interest in working with “our corporate partners” to create workforce housing serving middle-class families and moderate income households. He also plans to link transportation funding to housing goals and is an advocate of rent control expansion, per his campaign statements.

In addition, Newsom plans to appoint a State Homelessness Secretary to oversee an Interagency Council on Homelessness.