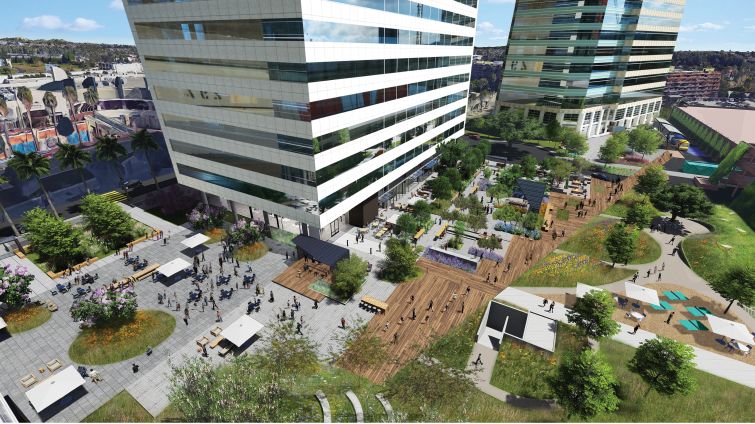 Plans for the campus, which encompasses 1.4 million square feet of office and retail space, include the creation of a host of collaboration, conferencing and amenity experiences available to tenants and visitors through a partnership between EQ and Industrious, a national premium coworking operator, as Bisnow reported yesterday . Unique to the arrangement, Industrious will directly manage 100,000 to 140,000 square feet of flexible office suites as well as activate ground-floor spaces across the entire campus. These involve handling and co-designing community spaces and managing amenities including a farmers’ market, programmed fitness options and dog-friendly elements, according to an Industrious spokeswoman.

Brooklyn-based Industrious raised $80 million in February, led by Riverwood Capital and Fifth Wall Ventures, as CO reported at the time. EQ plans to roll out a more flexible, customer-centered model at other properties being repositioned in the portfolio, including the Willis Tower in Chicago, 740 Broadway in New York, Market Center in San Francisco, the Exchange Building in Seattle and 100 Summer Street in Boston, a source familiar with the arrangement told Commercial Observer.

“Technology has fueled a remarkable pace of change in how we work and live,” EQ President and CEO Lisa Picard said in a statement. “In order to create effective venues for companies to work and live, we must have a highly curious and empathic culture—an emotional intelligence. Our new identity is a commitment to co-create spaces with our customers and help companies recruit the best talent.”

EQ Office “has itself undergone a major rebrand that includes plans to reposition several properties to improve the employee experience, as well as new partnerships with flex-space operators to make more efficient use of its footprint,” according to Bisnow. The arrangement with Blackstone, “which has more than $450 billion worth of assets under management in New York, Los Angeles, San Francisco, Seattle and Boston,” could set a new standard in how coworking operators work with real estate owners.

“What we’re doing with EQ at the Howard Hughes Center is unique in our industry,” Jamie Hodari, CEO of Industrious, said in a related official release.“But it’s exciting for one reason above all others: the partnership enables us and EQ to be big enough and bold enough to materially increase the engagement, happiness and productivity of the employees who walk into work there every day.”

The Howard Hughes Center will be home to 120 to 150 businesses and is expected to draw nearly 6,000 people to work and visit the campus daily, representing a 50 percent increase in the current daily foot traffic. EQ’s vision for the Howard Hughes Center, inspired by the coastal SoCal lifestyle, is being executed by Rios Clementi Hale Studios, a Los Angeles-based design firm behind such high-profile projects as the Row DTLA and Hollywood Bowl renovations. On-site work to transform the property commenced earlier this year and is scheduled to be completed by February 2019.