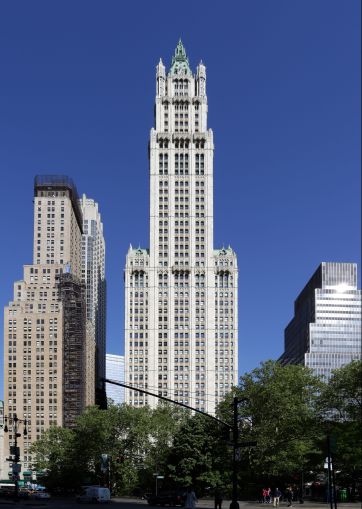 Architecture and design firm CallisonRTKL is moving its New York City offices to the iconic Woolworth Building in the Financial District.

The firm is taking the entire 28,096-square-foot 16th floor at the landmarked 60-story tower at 233 Broadway between Barclay Street and Park Place, The New York Post reported earlier this week. The 10-year deal will sese CallisonRTKL move from its current offices at 148 Lafayette Street in Soho.

Asking rent in the transaction was $57.50 per square foot, according to the Post. Mitchell Konsker and David Dusek of JLL represented the tenant, while David Ofman, Brian Siegel and Thomas Hettler of The Lawrence Group represented the landlords, partners Cammeby’s International and Witkoff.

Representatives for The Lawrence Group confirmed the deal but declined additional comment. A spokesman for JLL did not return a request for comment.

Cammeby’s and Witkoff own the lower, office portion of the Woolworth Building, while the upper half of the tower is currently undergoing an residential condominium conversion led by developer Alchemy Properties. The conversion features a 9,500-square-foot “Pinnacle Penthouse” unit, located in the property’s iconic spire, that is asking $110 million.