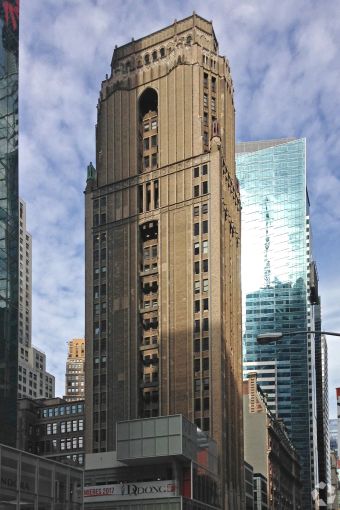 The floating-rate loan refinances roughly $100 million in financing provided by Industrial and Commercial Bank of China in May 2015.

The 29-story landmarked tower, on 42nd Street between Broadway and Avenue of the Americas, features 251,000 rentable square feet of office space. WeWork took out 82,000 square feet in a lease signed last summer. Other tenants include PEI Media—a company that owns financial publications—and ACORE Capital, one of the country’s most prominent real estate debt funds.

The tower is an notable historical landmark in urban architecture. Built in 1916 as headquarters for the Bush Terminal Company—the firm that operated the port facility where Brooklyn’s Industry City is now located—the building, designed by architecture firm Helmle and Corbett, was an early example of the tall but super-narrow towers that have exemplified recent luxury residential buildings in the city. The building’s lot is only 50 feet wide, and the architects aimed to design a tower that would serve as a model for tall, thin buildings located in the middle of dense city blocks.

Singapore-based United Overseas Bank has been actively lending on New York City assets. In September, it provided an $80 million construction loan to Savanna for its 26-story office property on Billionaire’s Row at 106 West 56th Street.