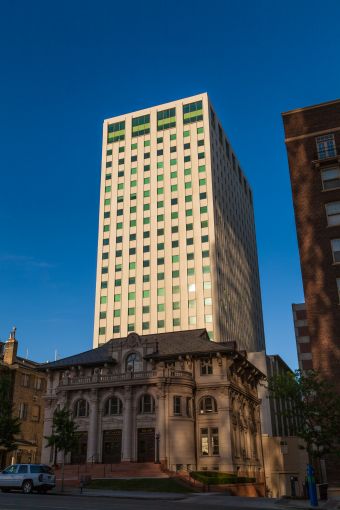 The loan will refinance existing debt on the property, and a portion of the proceeds will fund capital improvements aimed at improving the building’s occupancy, which currently sits at 76 percent, Trepp data show.

Newmark Knight Frank’s Jordan Roeschlaub and Dustin Stolly arranged the financing for MSB. Officials at the brokerage declined to comment on the transaction.

In May 2017, MSB completed exterior facade and lobby renovations in an effort to make the building more appealing to new tenants and also hosted an open house in an effort to gain more leasing traction, according to Trepp special servicer commentary.

MSB bought the property in 2013, REBusiness Online reported at the time, although the purchase price was not disclosed. The building was later securitized in the Credit Suisse-led CLNY 2014-FL2 commercial mortgage-backed securities transaction in October 2014, Trepp data show.

Its $29.6 million CMBS note fell 30 days delinquent in October 2017 as it neared its Nov.1, 2017 maturation date. In November, Trepp reported that the building’s debt service coverage ratio fell below 1.0x and that the borrower had defaulted on its mezzanine loan and was unable to meet reserve requirements or fund basic operating expenses. The new financing aims to reverse the trend.

Built in 1965, the 216,976-square-foot office high rise is located at 136 East South Temple Street in downtown Salt Lake City and is currently anchored by workplace consultant The Staywell Company, which holds 24,682 square feet—or 11.38 percent of leasable space—on a lease that’s set to expire on December, 31, 2018.

LoanCore has had a busy month of May on a variety of asset classes. The lender provided a $170 million debt package to Capstone Equities and Highgate to finance the W Hotel at 541 Lexington Avenue in Midtown, as Commercial Observer reported. The firm also lent $27.3 million to Brickman to refinance The Cigar Factory, a converted warehouse and creative loft-style office building in Long Island City, as CO first reported.

LoanCore and MSB could not immediately be reached for comment.