Coworking Steals the Show in the First Quarter 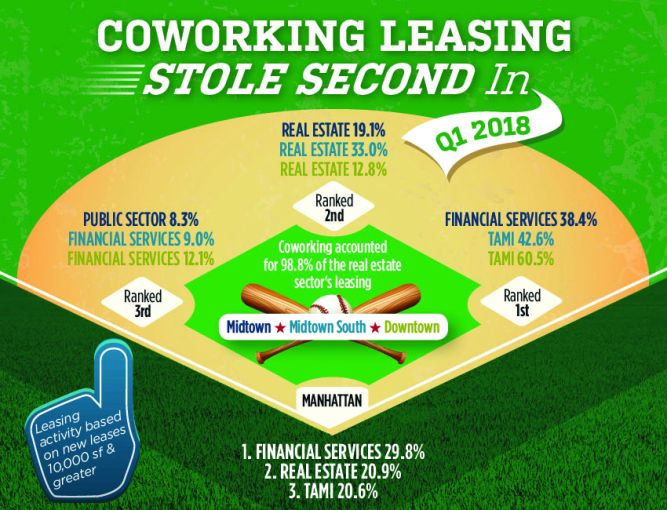 Coworking firms accounted for 98.8 percent of the leases signed in the first quarter. Richard Persichetti for Commercial Observer.

During the first two weeks of the 2018 Major League Baseball season, my Amazin’ New York Mets got off to a red hot start with a 10 and 1 record. This quick start by my favorite team made me think of the robust leasing activity by coworking firms in Manhattan during the first quarter of 2018.

Although the financial services sector remained in the top spot of the batting order with more than 1.2 million square feet of new leases greater than 10,000 square feet signed, and accounted for 29.8 percent of Manhattan’s leasing, the bigger story during the first quarter was how the real estate sector stole the show. The real estate sector accounted for 20.9 percent of Manhattan’s activity and slid into the second-ranked industry with 873,339 square feet leased and a 20.9 percent market share. This bumped TAMI (technology, advertising, media and information) into third place with 857,120 square feet leased and down to 20.3 percent of total new leasing, lower than the 22.2 percent market share recorded throughout 2017.

The real estate sector’s success in the first quarter was due to coworking firms accounting for 98.8 percent of the leases signed. While Knotel continued its expansion throughout Manhattan and led the way with eight new leases signed 10,000 square feet and greater, WeWork continued to add to its occupancy total by signing three new leases totaling 549,521 square feet. Coworking leasing really began to take off in 2014, but this trend has never impacted the leasing by industry as drastically as in the first quarter of 2018.

Although it will be highly unlikely for both the Mets and coworking firms to continue this pace for all of 2018, they both proved they are forces to be reckoned with throughout the year.