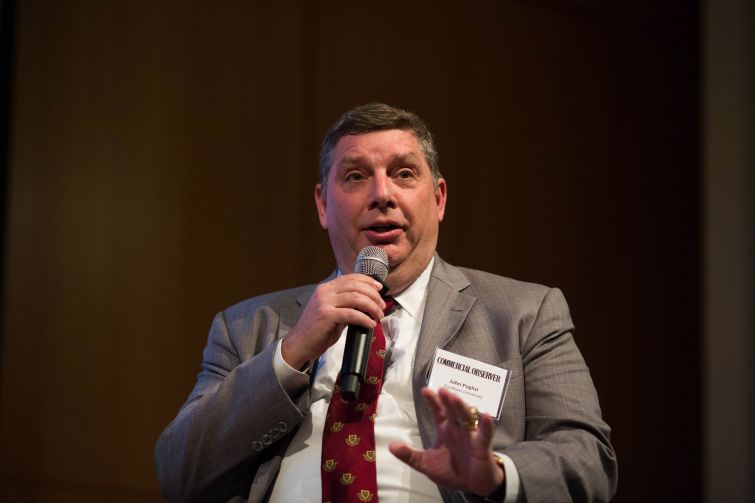 John Puglisi, Associate Vice President for Facilities Management at Fordham University, said Fordham seeks to use unions on most of its projects. Photo: Kevin Hagen/For the Commercial Observer

It’s well known that large New York City real estate landlords have (at times) a rocky relationship with union organizations and are losing their stronghold to open-shop contractors.

But in the higher-education space, unions are still favored, as was clear at Commercial Observer’s second-annual “Higher Education Construction Forum,” held at the City University of New York’s Graduate Center at 365 Fifth Avenue yesterday.

“We will do some non-union work in the Bronx, but the preference—certainly for larger developments—is with union shops,” Puglisi said. “The [project labor agreements with unions] allow us to keep good business practices and preferential prices. It’s a win-win.”

CUNY’s Meghan Moore-Wilk, the director of space planning, also prefers union work on projects as does Cornell Tech’s Diana Allegretti, the school’s director of design and construction, citing that the school entered into a project labor agreement with union shops for its Roosevelt Island campus, which is to be completed in three phases by 2043, as CO previously reported. The campus will have 2 million square feet of property on two-and-a-half acres.

“With the project labor agreement it was mostly a no-strike clause that benefited us and also alignment of the union holidays,” Allegretti said.

The final member of the first panel was Lynda Kane Rothermel, the campus architect and director of planning at the public College of New Jersey. She said her school has a small budget and sometimes sees funding cuts, but doesn’t opt for the cheapest option for its projects: instead of splitting up the work for the lowest bidder for each job, the school partners with one prime contractor which divides the jobs up to subcontractors.

Doing the opposite, “there were so many opportunities for problems,” Rothermel said, such as “not really being able to do a partnership while everybody’s trying to make money because they are low bidding everybody for the project.”

The universities represented at the event had major wattage: Prior to the first panel, Marcelo Velez, a vice president at Columbia University, gave opening remarks to the crowd, talking about his university’s new 17-acre Manhattanville expansion; he spoke to the audience of 180 education and construction experts about the technological advances the shiny new buildings have over older ones in the school’s portfolio. And the closing remarks were delivered by Linda Chiarelli of New York University, who broke down the institution’s 750,000-square-foot 181 Mercer Street project. It will be completed in 2021, and house classrooms, performing arts spaces, basketball courts, a pool, and student and faculty housing.

“Why is everybody here [today]? You are here today for the personal interaction that occurs,” Weiden said. “And I think that’s why live education will never die.”

Adding to that point was Dmitri Konon, the senior director of capital planning at Weill Cornell Medicine, who said that the school is changing its curriculum from lectures to more hands-on medical training, which cannot be achieved online. The school is also building out more in-school study spaces, fulfilling requests from students.

Addressing the point of how to design more secure schools against shootings, Burke said: “Society as a whole is really looking to see how architecture and buildings and surveillance systems are going to adjust to those challenges.”

When a member of the audience asked a question about how blockchain could be used in the construction process, the experts basically had no answers.

“I’m not familiar with blockchain,” Weiden said. “Every time I read about it I have to reread the article.”

Burke added: “I don’t even profess to know what blockchain is,” setting off lots of laughs by the crowd.

Maybe they will have more answers at next year’s CO event.