The Bronx Is Flush With New Construction 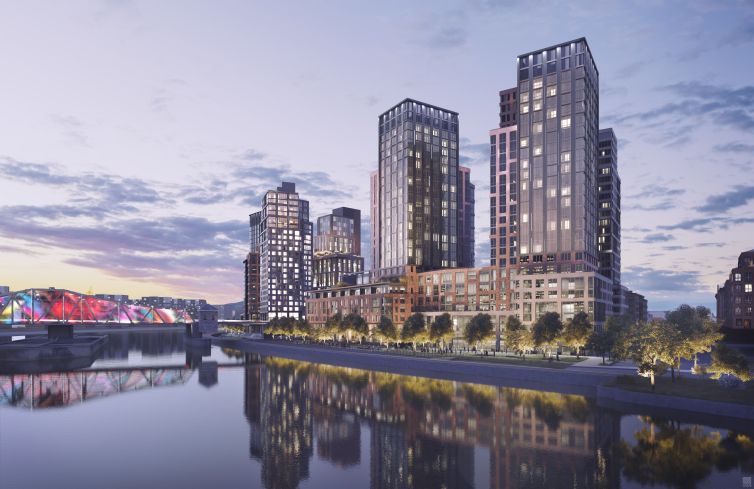 Somerset's planned four-tower building at 101 Lincoln Avenue in the South Bronx is one of the big projects driving the borough's construction boom. Rendering: Hill West Architects

The Bronx real estate market is still heating up.

The northernmost borough surpassed $2 billion in construction starts for the third year in a row, according to Dodge Data & Analytics numbers released by the New York Building Congress.

But, the results still fell short of the Building Congress and Dodge’s forecast for the year, which predicted $2.3 billion in construction starts for the Bronx.

Big affordable developments in South and Central Bronx, like the 237-unit Compass Residences project in West Farms, are pushing up the borough’s numbers. Chetrit Group and Somerset Partners also started construction on one of the Bronx’s largest market-rate rental developments, a seven-tower, 1,300-unit complex along the waterfront in the Port Morris section of the South Bronx. The New York Post reported today that Brookfield Property Partners is buying the site for $165 million.

Major infrastructure work also accounted for a significant chunk of the Bronx’s construction spending. The two most expensive projects in the borough were the $232 million reconstruction of the Unionport Bridge and the $213 million rehabilitation of the Robert F. Kennedy Bridge complex and toll plazas, which link Astoria, Queens, Wards and Randalls Islands, Harlem and the South Bronx.

Queens came in a close second, with $12 billion in new construction starts last year (up from $5.3 billion in 2016). The $4 billion redevelopment of the Delta Airlines terminal at LaGuardia Airport and the $3.4 billion replacement of LaGuardia’s central terminal both accounted for a huge chunk of construction spending in the city’s largest borough.

Citywide, construction spending was down from the 2015 peak of $41 billion but still healthy. Developers and institutions spent $38 billion on construction and renovations last year, of which $29 billion was new construction.

“I think the story is that the five boroughs are booming,” Building Congress President Carlo Scissura told Commercial Observer. “You see maybe some drops in different categories; overall 2017 was still one of the top years on record. And the scope of construction, design and engineering is really happening in every borough, and not just in one or two places anymore.”