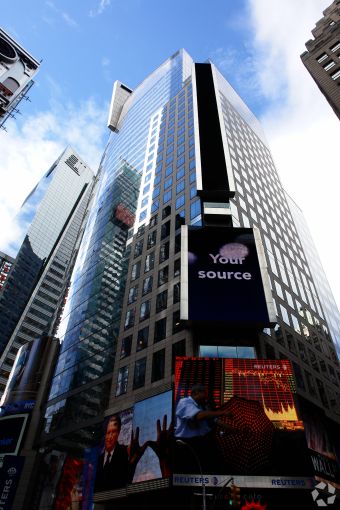 This kind of deal is healthy for your balance sheet.

Health and protein bar maker Kind Snacks has signed a 33,219-square-foot sublease with Thomson Reuters at 3 Times Square for additional offices in the city, Commercial Observer has learned.

Kind Snacks will occupy the entire 12th floor of the 32-story, 855,000-square-foot property (also known as The Reuters Building and 1481 Broadway), which is owned by Rudin Management Company.

The asking rent in the deal was $55 per square foot, according to a spokesman for Colliers International, which handled the deal for the sublandlord. The sublease runs through 2022, the spokesman said.

Kind Snacks, a 14-year-old company, is keeping its 37,201-square-foot offices at 1372 Broadway between West 37th and West 38th Streets, according to the Colliers spokesman. It signed a sublease in 2014 with sublandlord Walmart in that deal, which was set to expire in 2021, as CO previously reported.

Reuters had “excess space,” according to the Colliers spokesman. It leases 403,730 square feet (or nearly half) of 3 Times Square and has occupied its space for 16 years, as per CoStar Group.

CBRE’s David Kleinhandler and Michael Politi, which brokered the deal for Kind Snacks, declined to comment via a spokeswoman. Also, spokespersons for Kind Snacks and Reuters did not immediately return requests seeking comment.