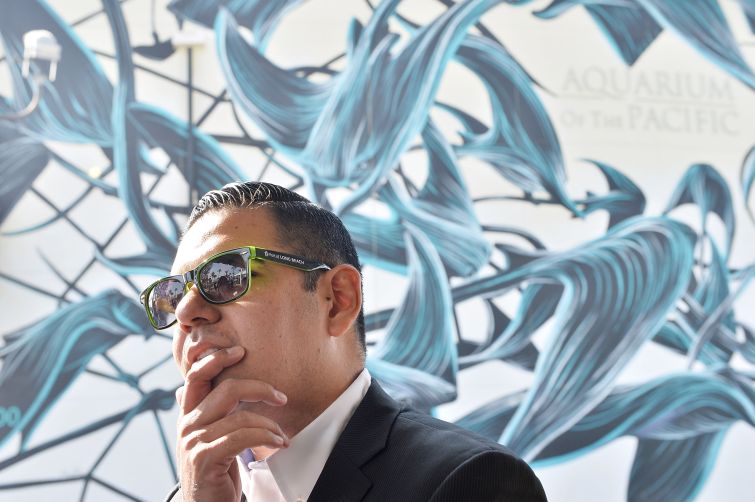 If anyone is at the center of everything relevant in politics and culture today, it’s the 28th mayor of Long Beach, Calif., Robert Garcia. At only 40 years old, Garcia is the first openly gay mayor of Long Beach and the first Latino (he is an immigrant from Lima, Peru), and his mission is to put his city on the tech sector map.

Garcia lives in Downtown Long Beach with his fiancé and longtime partner, Matthew Mendez, in a loft in a historic, adaptive reuse project.

With just under half a million residents, Long Beach (L.B.)—the coastal city and port in Southern California—is the 36th most populous city in the U.S. and the seventh largest city in the state. Although it’s larger than Miami, New Orleans, Cincinnati and Pittsburgh, because of its proximity to Los Angeles, the two cities are often compared with each other—with Long Beach thought of as the step-sister to a much sexier, star-studded sibling.

Among the world’s largest shipping ports, the Port of Long Beach is the second-busiest container port in America, according to the Boss Magazine. The seaport generates approximately $100 billion in trade and employs more than 316,000 people, per year.

The Long Beach City Council recently advanced a fiber Master Plan for the city of Long Beach that will connect all city facilities with a robust and redundant fiber network; it will also create many opportunities for private investment and public benefit projects.

Another key tech project the city recently launched is Data L.B., an online data and mapping portal to make public data sets available to the public and easier to understand.

Garcia, along with John Keisler, the mayor’s director of economic and property development, spoke with Commercial Observer about the plans to move Long Beach forward, lure in mega-companies and lay the groundwork for a tech-savvy workforce.

Commercial Observer: Why is it so important for you to have large-scale tech companies set up shop in Long Beach?

Robert Garcia: It’s important for us in Long Beach to be a part of the growing tech sector that’s happening across all of Southern California. The increase in tech jobs has been substantial, and we’re seeing a lot of interest from small upstarts to larger organizations that have moved in.

Now based in Long Beach is Mercedes-Benz research and development division and Virgin Orbit, run by Richard Branson. Both have opened their headquarters in L.B., and they’ve expanded and are continuing to grow. Zwift Tech, a recreational-fitness company, opened headquarters in L.B. Laserfiche has expanded in L.B., and other types of businesses that support incubation, like big coworking organizations, such as WeWork, are here.

But, for us it’s not just about seeing the growth in L.B.: We want to see it everywhere nearby. We love it anytime tech moves into Irvine or West L.A.—that’s good for us because those folks look for homes, and with a strong connector in public transit, it makes everything work well economically.

What are some of the draws to L.B.?

Garcia: We have an active and growing downtown on the water. The airport is in the middle of the city. It’s halfway between Orange County and Los Angeles. It’s a great quality of life. There are good schools and access to really good universities.

John Keisler: Whether its manufacturing or trade and logistics, the port of L.B. is a massive driver of the economy in the U.S. but also for our economy. But it’s changing. Tech cuts across all of our industries and is really having an impact on the last 10 years since the advent of the wide deployment of mobile and wireless technology and advances in processing speed.

At the mayor’s directive, we have created an extensive 10-year economic blueprint. We need to have residents and employees connected, educated and have the hardware and software to use the resources online.

We embarked on an 18-month process to create a fiber Master Plan but not just building up the network and partnering with the private sector; you also need digital literacy and training. So we partnered with the city college to create workforce development.

There will be no digital divide. Our goal is to have 100 percent connectivity in the city, allowing the tech sector to come in to L.B. and be easily connected.

Once you build up your tech sector and bring big corporations to L.B., what about the now infamous California housing crisis?

Garcia: We’re building about 1,000 affordable units being right now. Housing affordability is the number one issue in California. We know we have to build more. The city is doing a lot of upzoning [a land use regulation under consideration in California that would relax building height and density standards along transit corridors], particularly in downtown and along transit. We can’t build it fast enough at this point.

The federal count hasn’t shown a big increase in homelessness in L.B., but it’s an issue, and it’s a very migratory community, so we have to build housing. We have a shortage in the state. We’re looking at regulations around Airbnb and other short-term rentals.

As the tech sector grows, do you have the manpower to run it? Or are you relying on companies to bring their own employees?

Keisler: In a recent survey of 300 randomly selected businesses in L.B., their No. 1 concern was finding and keeping qualified workers.

We feel that, as a city, we can create a really cool environment where people who are connected and ultimately have the knowledge to utilize the internet and technology can be assets for both new businesses and business expansion. And we’re seeing that.

What about public transportation? Everyone believes that this is one of the most challenging aspects of living in SoCal.

Garcia: We’re building a much larger rail network. We passed a huge measure, the biggest in the country, just last year, so people can get across the county on rail.

[Garcia joined the L.A. Metro board of directors in 2017 to help steward Measure M, the agency’s $120 billion investment plan for connective infrastructure throughout Los Angeles County and the whole of metropolitan L.A.]

What are a few of the dream tech companies you’d like to see make the move to L.B.?

Garcia: Look at Amazon. One of the regions they’re looking at is L.A. County. The reason why these larger firms are attractive is because they don’t necessarily need to be in L.B. for us to see an impact. A company like that moves anywhere in the L.A. area, and we’ll be impacted. Obviously, firms like Google or Amazon that have a density of people would be great. We’d also love to see Virgin grow and see some of the other operations that they have also grow.

If you could say there’s one thing on the top of your agenda for L.B., what would that be?

Garcia: The big issue is building housing. We’ve got billions of dollars in housing construction in the downtown area, we’ve got cranes everywhere, and it’s booming with construction. The primary issue in every city in in California is building enough housing so that prices stay affordable.