And it's not just within Midtown South 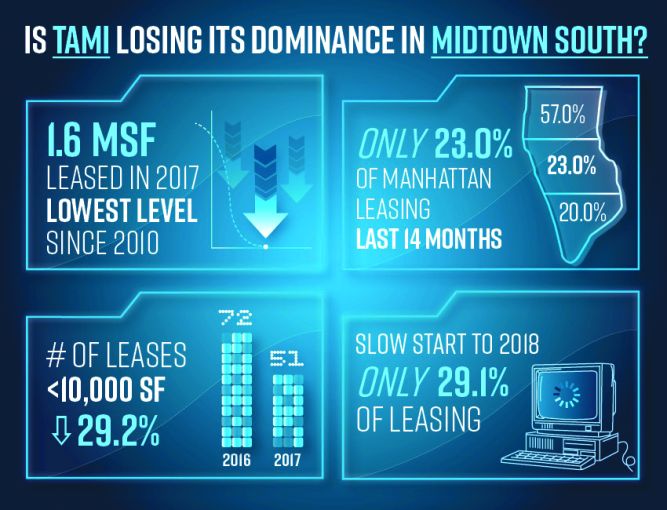 From 2014 through 2016, TAMI (technology, advertising, media and information services) was all the rage, and accounted for an average of more than 44 percent of the leasing activity in Midtown South. But during the last 14 months, TAMI leasing slowed in Midtown South and has only accounted for 36.3 percent of the total activity. Since TAMI reached an all-time high of 48.3 percent of Midtown South’s total leasing in 2015, this sector began to slowly lose its dominance in the area, despite remaining within the top two sectors for demand throughout Manhattan, as other industries relocate to Midtown South to compete for talent.

The 1.6 million square feet leased by TAMI tenants in Midtown South during 2017 was the lowest level since 2010, as the real estate, retail and public sectors all gained market share. Total TAMI activity accounted for only 37.5 percent of the total Midtown South leasing, which marked the first year this sector leased less than 40 percent since 2013. The start of 2018 has been no different, as TAMI leasing totaled only 211,854 square feet and accounts for 29.1 percent.

Leasing by TAMI has been outpaced by the real estate sector during the first two months of the year, as coworking companies continue to lease space rapidly. Of the 243,648 square feet leased by real estate firms, 92.7 percent was leased by WeWork and Knotel. The impact of coworking space on the real estate market is evident in the drop of small leases by the TAMI sector within Midtown South last year. In 2017, TAMI tenants of less than 10,000 square feet signed 51 leases totaling 236,206 square feet—a 29.2 percent and 36.8 percent decline compared to 2016, respectively.

Richard Persichetti is the vice president of research and marketing at Cushman & Wakefield.