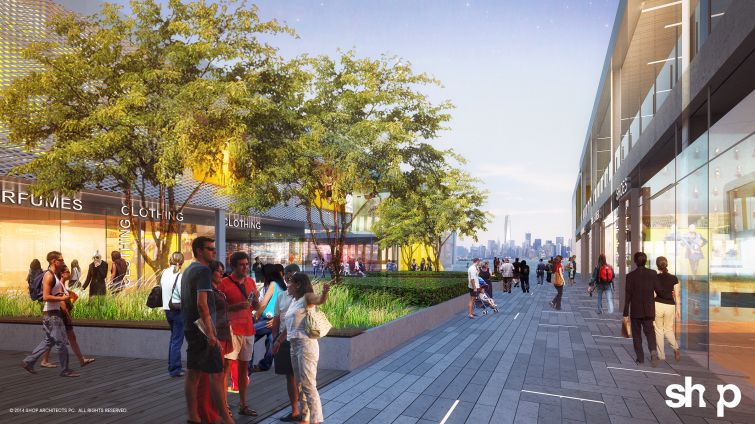 A corridor at Empire Outlets, where the Samsonite space will be located. SHoP Architects

Luggage manufacturer and retailer Samsonite has signed a lease for space in Empire Outlets, the outdoor shopping center that is under development on the North Shore of Staten Island, Commercial Observer has learned.

Samsonite has taken 1,924 square feet next to Banana Republic Factory, according to information provided by the developer, BFC Partners. The lease is for seven years, and the developer declined to provide the asking rent. (In April 2016, the asking rent was $125 per square foot, CO previously reported.)

“We’re very excited to be a part of this new outlet development in New York City,” John Mullins, a vice president and general manager of Samsonite Retail U.S., said in prepared remarks. “This unique shopping experience close to the Staten Island Ferry terminal should attract many tourists and locals that will make this project a success.”

James Prendamano of Casandra Properties brokered the deal for both sides.

“Samsonite has set the benchmark for excellence in their category,” Prendamano emailed CO. “Considering the droves of anticipated tourists to the center, we could not imagine a better fit to suit the travelers needs. Additionally, Staten Island as a whole, 500,000-people strong, yearns for access to brands currently not available on the island. It’s estimated 46 percent of SI shoppers leave the state to achieve their shopping goals. Empire Outlets [will] become a mainstay for not only tourists, but locals alike keeping those tax dollars and jobs in the local economy.”

BFC broke ground for Empire Outlets at 55 Richmond Terrace in April 2015, and upon completion it will be home to more than 100 designer outlet retailers. It is part of BFC’s $352 million, 1-million-square-foot development at the site, comprising a hotel and a 1,250-vehicle parking garage. Retail tenants include H&M, Nordstrom Rack, Gap Factory and Columbia Sporting Goods. Eateries signed on for Empire Outlet’s 40,000-square-foot food and beverage deck are Shake Shack, Artichoke Basille’s Pizza and MRKTPL, the borough’s first artisanal food hall.

Tenants will assume their spaces this spring with openings slated for the fall, an Empire Outlets spokesman said. The project’s opening was delayed to this March from Black Friday 2017, the Staten Island Advance noted, as BFC was trying to coordinate the timing with the opening of the adjacent New York Wheel. (That project has faced setbacks.) A BFC spokesman explained the most recent delay to the Advance this way: “In order to effectively manage the increased demand for the remaining space at Empire Outlets, and to ensure that all tenants, including our new prospects, benefit from a single grand opening, we are shifting the opening date to fall 2018.”