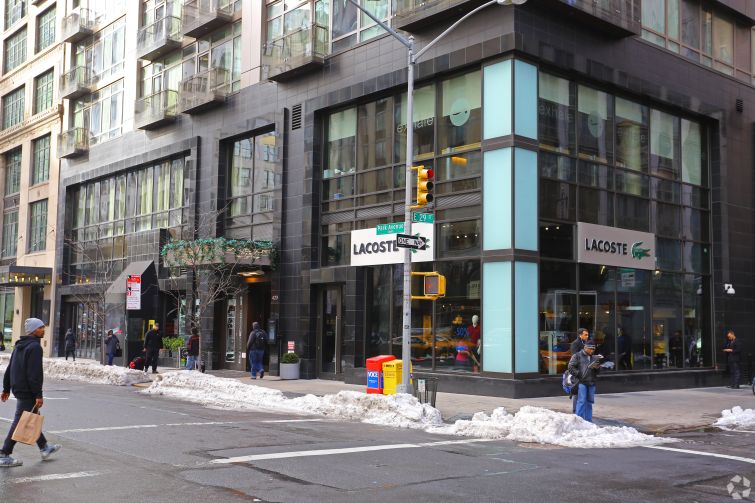 After less than eight years, Lacoste has shuttered its store on Park Avenue South in NoMad, Commercial Observer has learned.

“Lacoste continues to enjoy strong sales in the U.S. market. Unfortunately renewing the lease for this location did not make sense for our business due to rent pressure and declining traffic,” Joëlle Grünberg, the president and CEO of Lacoste North and Central America, said in a statement provided to CO.

In 2010, the Paris-based company store soft opened a Lacoste boutique at 420 Park Avenue South between East 28th and East 29th Streets in what was then the Gansevoort Hotel Park Avenue, and closed for good at the end of last month, a company spokeswoman indicated. (The hotel officially opened in early 2011.)

The hotel was rebranded Royalton Park Avenue after GreenOak Real Estate and Highgate purchased the property last December for $200 million, as per CoStar Group.

A couple of brokers weren’t surprised about Lacoste closing up shop there.

“I wondered what they knew about that location that I didn’t,” said retail broker Chase Welles of SCG Retail. “Turns out, not much.”

Peter Braus of Lee & Associates NYC said: “Park Avenue South is not traditionally a soft-goods location. It’s always been known for F&B. [There are] no really good co-tenancies to attract other apparel shoppers. In that part of town, Lower Fifth Avenue is where they should have been.”

The Lacoste boutique occupied 840 square feet at the base of the hotel. It sold Lacoste’s men’s, women’s and children’s collection, and featured “co-branded merchandise and limited-edition items created in partnership with well-known designers,” according to a press release from Feb. 25, 2011.

Other retailers at the hotel include Exhale Spa, Asellina restaurant and Juice Press.

Lacoste has three other boutiques in Manhattan: at 575 Madison Avenue in Midtown, 541 Broadway in Soho and Westfield World Trade Center in Lower Manhattan. The Lacoste spokeswoman said there are no plans to close any of those locations.

Representatives for GreenOak and Highgate didn’t immediately respond to a request for comment.