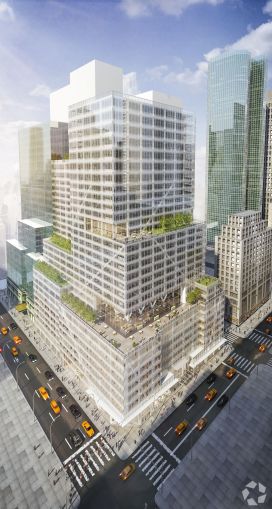 The firm will take 16 full office floors and two retail spaces in the newly revamped property, which fronts a full block between East 46th and East 47th Streets, just north of Grand Central Terminal, according to a release from the landlord.

Its space includes a conference center, multiple outdoor terraces and several double-height amenity areas, plus a 24,000-square-foot Chase Bank branch on the ground floor. The banking and financial services firm will occupy half of the 850,000-square-foot building on a 10-year lease. The company, which is America’s largest bank, will take up floors two through six, 14, and 22 through 32. Sources familiar with the deal told CO that asking rents in the building range from $87 to $125 a square foot.

“JPMorgan has long been a stalwart of the Grand Central District, and their continued long-term commitment will serve as a major boost to this iconic Midtown neighborhood,” Levinson said in prepared remarks. “We are proud to welcome them to 390 Madison Avenue.”

Last week, J.P. Morgan Chase announced it would knock down its existing headquarters at 270 Park Avenue and develop a new, 70-story headquarters in its place. 270 Park is conveniently located a block east of L&L’s project, which will make it easy for the bank to relocate thousands of workers when it decides to redevelop its current home. The lease deal also comes after Crain’s New York Business reported in January that J.P. Morgan was considering leasing nearly 400,000 square feet of the building.

L&L is in the midst of redeveloping the century-old building by adding eight new floors, boosting the height from 24 stories to 32 stories. The “re-massing” of the property involves removing millions of square feet of steel and concrete from the base and constructing the eight new stories on top, bringing the building’s full height to 373 feet.