Inside the first West Coast outpost of the Italian gourmet marketplace 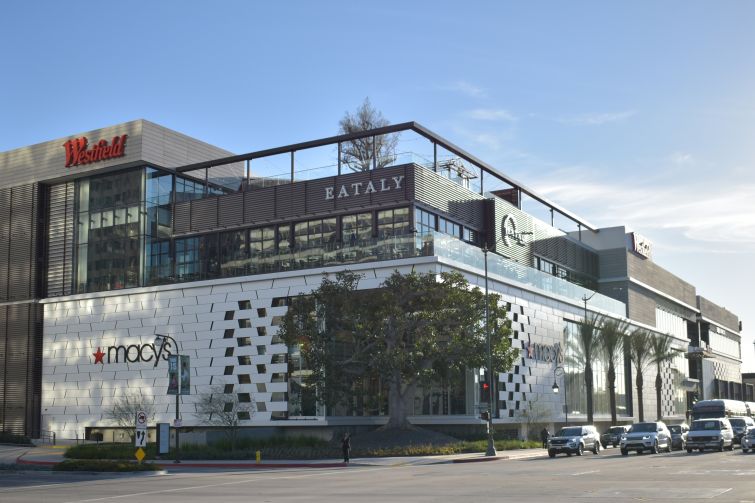 The facade of Eataly LA attached to Westfield Century City. Courtesy of Clune and Eataly 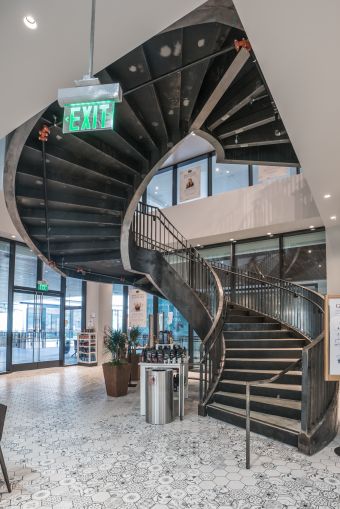 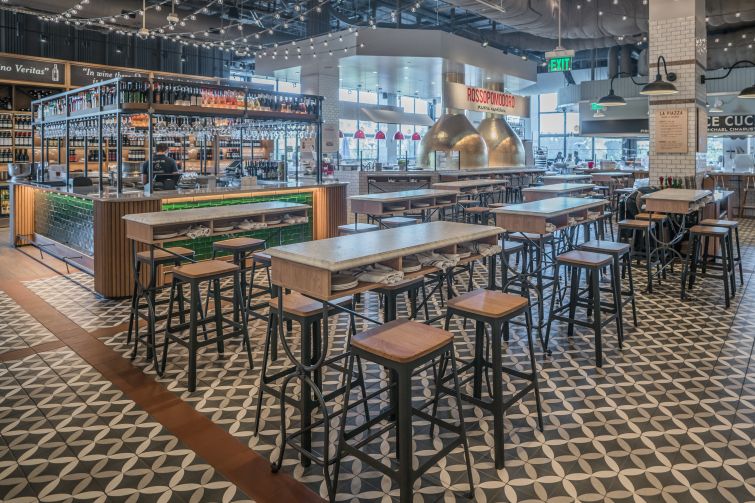 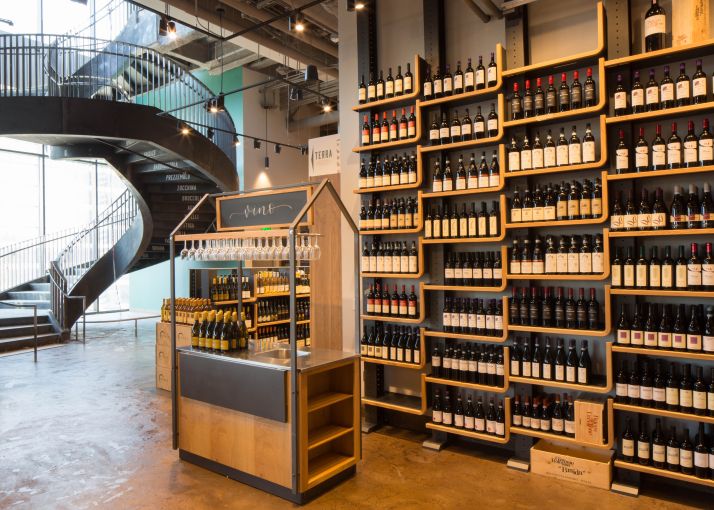 In a nod to California’s established new-world winemaking industry, the West Coast outpost features non-Italian wines for the first time for purchase. Courtesy of Eataly and Clune Construction 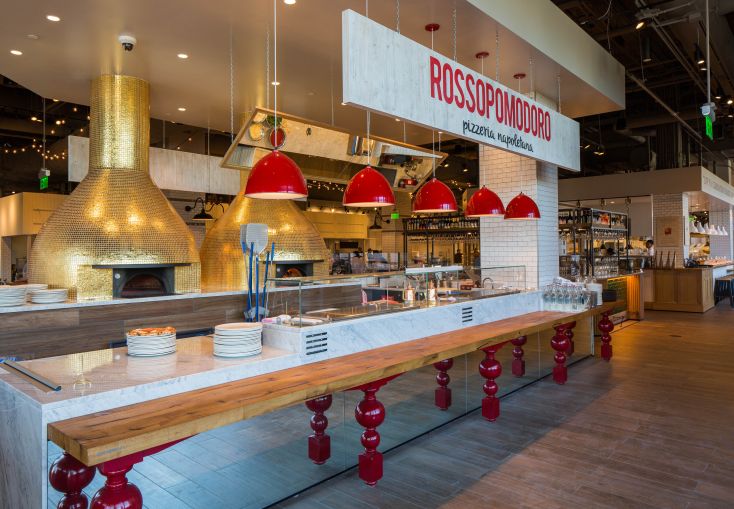 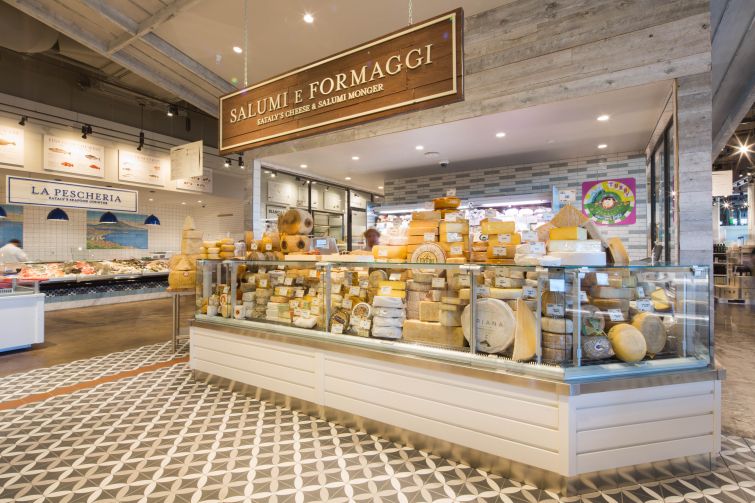 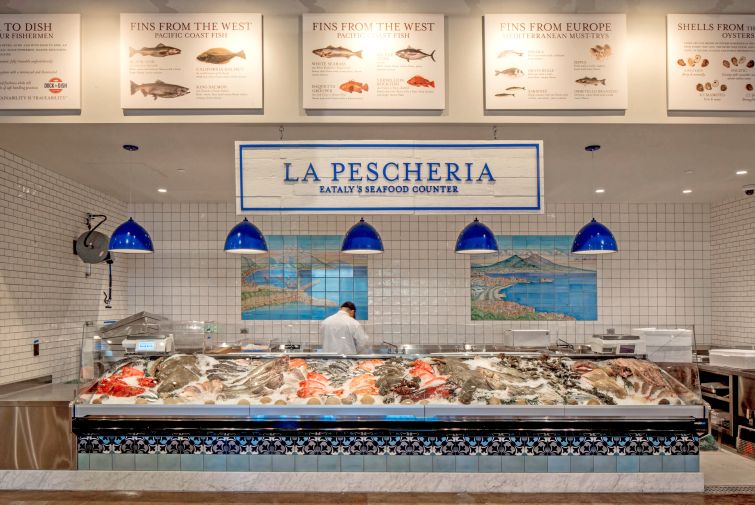 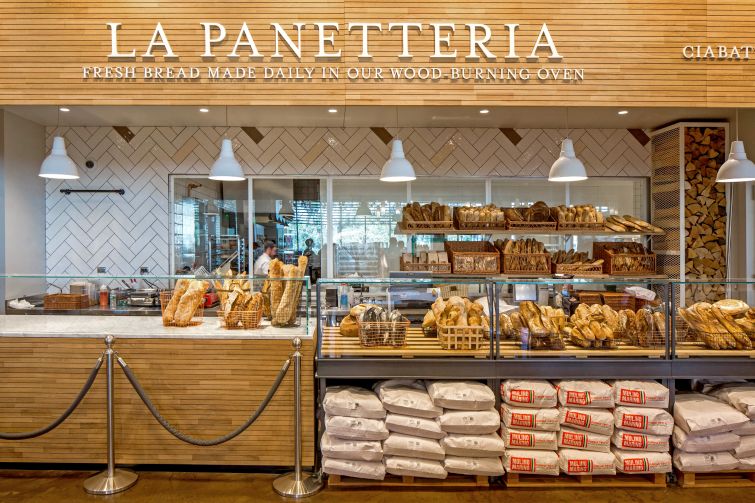 La Panetteria. Courtesy of Eataly and Clune Construction
Previous Next

Like a nice bottle of Italian wine, Eataly L.A. has had time to breathe since it opened.

The crowds that greeted the November opening of the Italian food emporium’s first West Coast location at the Westfield Century City had wait times of up to four hours, proving that, even in Los Angeles, gluten is far from shunned, Matija Blazic, the communications and PR manager at Eataly L.A., told Commercial Observer. (In response to the line insanity Eataly L.A. created a temporary Line-O-Meter on their Twitter account to give would-be visitors an update on wait times by a ranking of hot peppers.)

Clune worked closely with Eataly and the architect, STUDIOS Architecture, the commercial interior design firm behind Eataly’s Lower Manhattan property and other high-profile projects in New York, including Nike’s Midtown office at 855 Avenue of the Americas.

Originally launched in 2007 in Turin, Italy, by Oscar Farinetti, the L.A. iteration is the 39th of 40 Eataly outposts around the world. (Amazingly, there is a more recent one: an Eataly opened in Stockholm to much fanfare on Feb. 17.) There is no sign of stopping, with stores planned for Las Vegas starting in 2018 and Toronto in 2019, according to Alex Saper, the COO and partner of Eataly USA.

A few months in, the crowds at Eataly L.A. have become more manageable. On a sunny weekday late afternoon in March, it’s downright peaceful.

The market is spread out over two floors and soon a third, once the rooftop restaurant, Terra, is completed by Clune this spring. Two-interconnected spiral staircases, link the three marketplace floors.

The staircase was no small feat: Clune worked with an out-of-state manufacturer in Minnesota to fabricate the stairs, shipped them to Los Angeles in large pieces and then carefully installed them into the space with the use of a crane.

Each Eataly is built around a theme and for L.A., it’s water, both as an element and its preservation. One of the most distinctive features of Eataly L.A. is a greywater system dedicated to recycling water from hand-washing sinks in restrooms and condensation from refrigerators and reusing it to water indoor plants, an olive tree and to flush toilets. It’s the first of its kind for Eataly and posed unique challenges.

“The greywater system was pretty complex. It’s certainly the first one I’ve worked on in L.A. to this capacity,” Peter Bahruth, the managing director and general superintendent of the west region at Clune, said. “Typically, a greywater system is done inside a building. It’s part of the building infrastructure. This is the first one I’ve worked on in the interior of a client’s space.”

Tanks for the greywater system are visible on the second floor, just outside the cooking school La Scuola di Eataly, and parallel to dessert counters offering gelato and, exclusive to the L.A. location, Cannoli E Bomboloni, which offers made-to-order Sicilian cannoli and stuffed bomboloni.

“Our in-house greywater system reduces the amount of drinkable water we use by 33 percent by collecting all ‘greywater,’ or used water from the hand-washing in our restrooms and the condensation from our refrigeration unit,” Saper said. “Water is the essence of life. It’s crucial to both Italy and our new home in California, especially considering droughts. Basically: water is the one of the main concerns for the future. It’s clear that we need water in our lives; it’s also clear that there’s a problem with our water usage.”

In addition to the greywater tanks, Saper said Eataly L.A. is using technology across the store to save water.

“Our kitchen equipment will use 64 percent less water than a comparable commercial kitchen, saving 5.5 million gallons of water every day,” Saper said. “We are the first Eataly location to have this type of system.”

Bob Dahlstrom, the executive managing director and president of the west region of Clune, said extensive planning was required in the months leading up to actual construction to ensure the plumbing was completely solid. They began with early work, including plumbing and electrical, in July 2016, with the construction phase beginning that December.

“A great deal of attention was paid to making sure it was well-detailed and constructed properly to make sure there would be no leaks,” Dahlstrom said. “There were over 400 penetrations in the third-floor slab that opened up into the second floor. All those had to be very carefully detailed out and built properly to avoid damage to the Macy’s below.”

By all accounts, it was a labor-intensive, but highly-rewarding process. Clune had an on-site staff of eight to handle the project.

“There were a lot of moving parts and not only was it the traditional trade people, we were also working into the schedule certain equipment and finishes that were brought in from Europe,” Dahlstrom said. “There was the bread oven from Spain. There was a pizza oven from France. We had all this equipment that was coming in, we had tile that was coming in and we had the millwork that was made in Italy and installed by Italian carpenters for several months concurrent with our construction.” But that, he said, was part of the charm of the project, recalling hearing Italian work crews speaking in their native tongue. “That was pretty cool.”

Neither Clune nor Eataly would disclose the budget and final cost of the L.A. Eataly buildout.

The fusion of old world and the new—a standard Eataly approach—is evident not only in the mixed crews that constructed the property, but the products and other offerings in L.A.

Like other Eatalys, there are markets scattered on the main floor dedicated to cheese and cured meats, seafood, bread, cut meats and pastries, as well as a large selection of fresh produce and imported Italian groceries. Three restaurants—the seafood-oriented Il Pesce Cucina, La Pizza, dedicated to Neapolitan-style pizza, and La Pasta, (self-explanatory)—are arranged around floor-to-ceiling windows offering a view of palm-tree-lined Santa Monica Boulevard and the hills of Century City and beyond. Eataly L.A., like other locations, enlists local talent among its roster of culinary masters. (Aside from co-founder Mario Batali, whose products were pulled from its shelves in response to sexual assault allegations leveled at the famous chef.) Acclaimed local chef and restaurateur Michael Cimarusti and his co-owner Donato Poto of Providence helm the seafood restaurant. L’Orto dello Chef, Eataly’s take on the salad bar, which was first introduced at their Downtown New York location, will be helmed with a rotating collaboration with local chefs. Currently, Jason Neroni of Venice’s iconic Rose Café, is curating its offerings.

In terms of firsts, Eataly L.A. is the only location where patrons can sit outside, with tables on an outdoor balcony offered to take advantage of the usually pleasant SoCal weather. It also is the only location thus far to offer Roman style pizza—thicker-crust oblong pies baked and served up on wooden pallets—which was doing well with the late-afternoon snacking crowd.

In a nod to California’s established new-world winemaking industry, the West Coast outpost features non-Italian wines for the first time for purchase.

“California and Italy share many similarities, including the climate, which allows us to be even more in touch with the community and pay homage to California’s rich wine tradition,” Saper said.

“We like to think of our stores as a family,” Saper said. “We are a brand, but each store is slightly different and has its own personality, just like siblings.”