Under Construction: Inside NYU’s Transformation of the MTA’s Former HQ 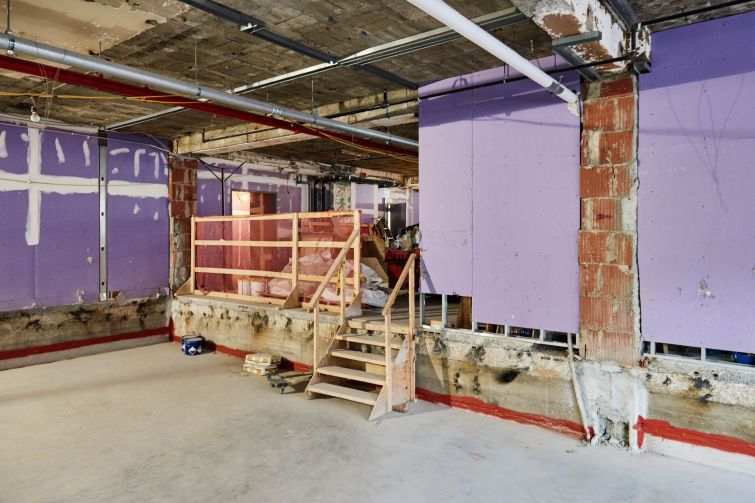 This raw space on the second floor, which used to be the MTA's money counting floor, will become four production studio rooms. Since the building has 10-foot ceiling heights, NYU dropped the floors four feet and borrowed height from the 20-foot ceiling heights in the ground floor to accommodate the studios. Photo: Sally Montana/for Commercial Observer 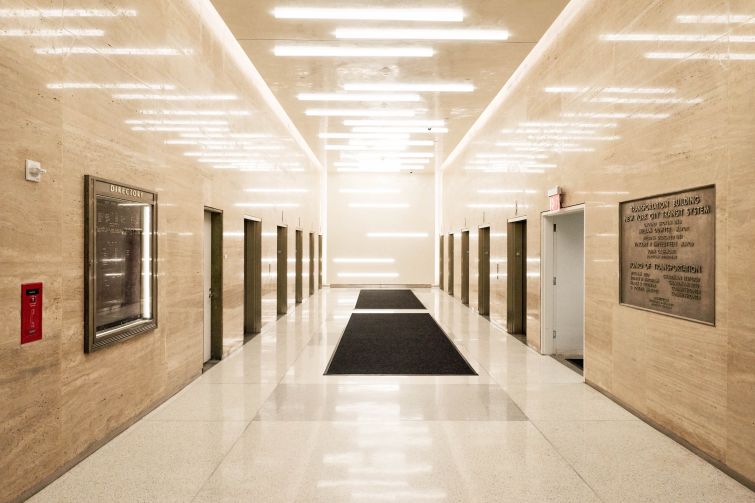 NYU installed 10 new elevators in the building and polished the marble on the ground floor. Photo: Sally Montana/for Commercial Observer 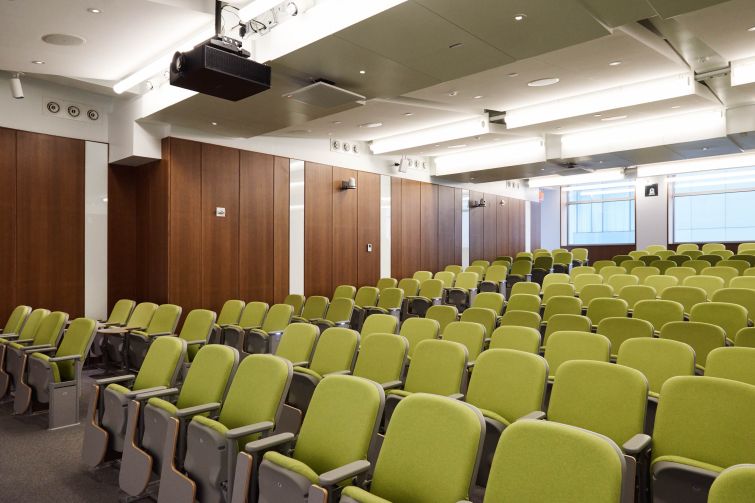 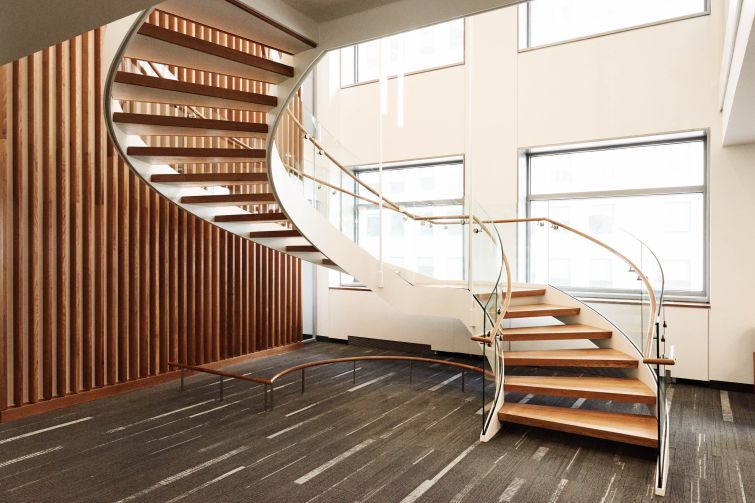 A spiral staircase made from wood is just one ways the university incorporated the sustainable material throughout the building. Photo: Sally Montana/for Commercial Observer 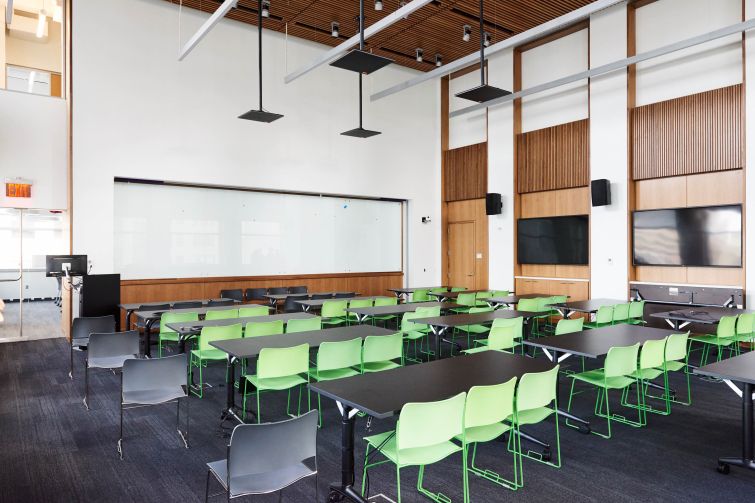 A completed classroom that can hold up to 100 people. Photo: Sally Montana/for Commercial Observer 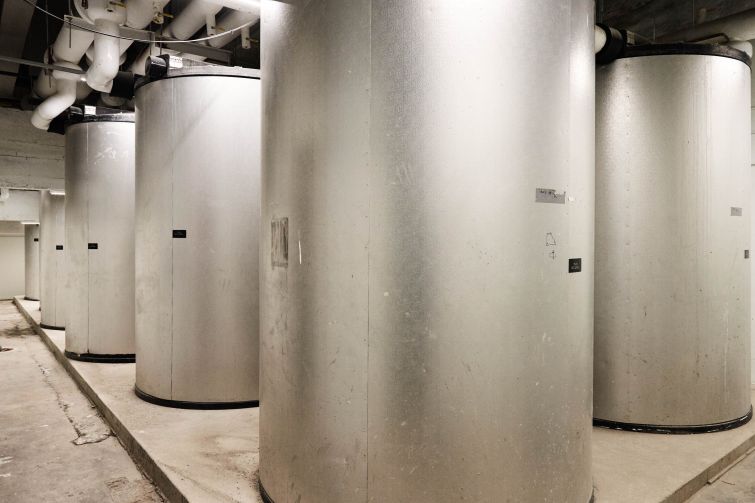 The thermal ice storage that NYU installed so the building can create heat for excess heat to melt, instead of pushing out the heat into the outside environment. Photo: Sally Montana/for Commercial Observer 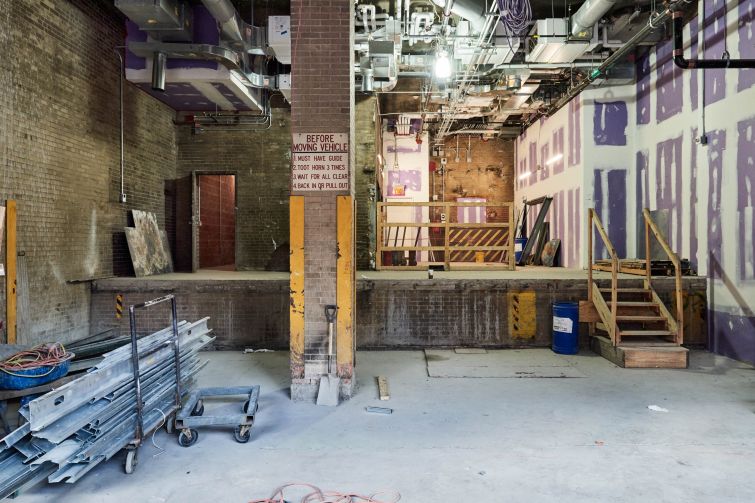 A garage space that used to allow for armored trucks to pick up money from the MTA headquarters building, will be transformed into a performance venue. Photo: Sally Montana/for Commercial Observer
Previous Next

Once upon a time the Metropolitan Transit Authority’s headquarters in Downtown Brooklyn at 370 Jay Street had offices and a money counting floor (the second).

Today, it’s housing scholars for New York University, which signed a 99-year lease for the property in 2012, and is adding the building to its Kings County campus.

At the intersection of Jay Street and Willoughby Streets, parts of the 13-story structure has since been turned into classrooms, lectures halls and other academic spaces. The limestone facade was restored, mechanical systems have been upgraded, 10 new elevators have been installed and the lobby’s original marble repolished.

NYU’s Center for Urban Science and Progress (CUSP) began occupying the second, 12th and 13th floors of the property in December. But construction to renovate and remodel the building is expected to continue until the end of next year. The property will include spaces for a variety of the university’s schools, housing student engineers, research scientists, game designers, media artists and musicians.

“What we are really trying to do is make this a hub that can foster interactions between artists and engineers who are doing very complimentary things, and we want to see what comes out of that,” Andrew Repoli, NYU’s director of construction management, said on a tour of the building.

The structure has a lot of open space on each floor, and the core was shifted to one part of the building, allowing the floors to be free from divisions for elevator shafts, mechanical rooms, bathrooms or staircases. The one downside is that the structure’s floors have 10-foot ceiling heights (save for the lobby that has 20-foot heights).

But 10 feet isn’t conducive for a school lecture hall, which is what NYU needs for approximately 200 students. So the school got creative and dropped the floor four feet down, essentially borrowing a piece of the lobby’s height on the eastern wing of the building to fit the auditorium on the second floor.

The procedure worked so well that NYU decided to replicate it on the western side for a 7,000-square-foot media commons on the second floor. There’ll be four studios in the space where students will learn film and production techniques, such as motion capture (as seen in Rise of the Planet of the Apes).

In another effort to gain space, all of the mechanicals systems in the building were shifted to the rooftops or in the cellar. Those spaces formerly dedicated to the guts of the building will be turned into smaller rooms like conference and meetings spaces as well as small private spaces to make calls.

One of the main aims of the renovation was to make the building more environmentally friendly. NYU placed energy efficient LED lights throughout the building, and they have also installed 1,200 new (thicker pane and more efficient) windows. Heat generated by the building, which would normally be pushed outside via exhaust vents, will be used to melt ice created in thermal ice storage vats.

Sustainable materials, like wood, were used to build walls, tables, ceilings and a spiral staircase on the eighth floor. NYU also installed a one-megawatt microturbine on the roof of the building that will allow it to generate its own electricity.

“Sustainability is better for the people who work in the building,” said Cecil Scheib, NYU’s assistant vice president for sustainability. “They’re going to think better; we are going to attract world-class students and world-class faculty. A better building and a green building means a better environment for people.”

There is still a second phase of construction remaining. NYU plans to transform a garage space of the building into a performance venue, create a grand staircase from the lobby to the second floor, replace walls on the ground floor with glass to make a new entrance for the property on Jay Street and reconstruct the crumbing subway station entrances under the structure. And NYU recaptured an MTA control board that was left in the building and is considering to reinstall it to pay respect to the property’s history.