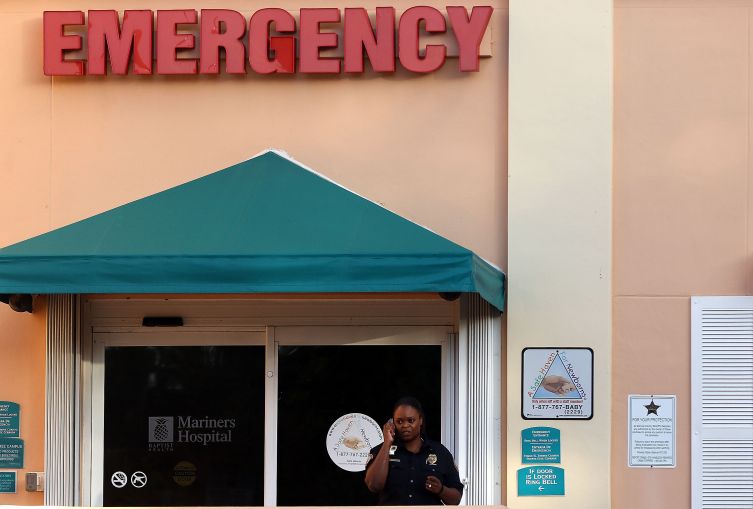 A hospital in the Florida Keys. Analysts said healthcare REITs have suffered from fears of cuts in government medical spending. Photo: Getty Images

As global stock markets tumbled this week in a corrective to months of buoyant growth, American real estate investment trusts continued to underperform corporate equity indexes, adhering to analysts’ expectations that REITs would retreat as interest rates threaten to climb.

The FTSE NAREIT U.S. Real Estate Composite Index closed Tuesday afternoon down more than 8.6 percent for 2018, trailing the S&P 500, which has been nearly flat since New Years Day. That follows the pattern of the last 365 days, which have seen the broader U.S. stock market up nearly 17 percent. By contrast, the composite REIT index lost about 4.6 percent over that period.

“REITs have underperformed the S&P by about 1000 basis points this year. If you annualize that, it gets to be a big number,” said Mizuho Securities analyst Richard Anderson, who apportioned the biggest chunk of the blame to rising interest rates.

“Everyone is saving taxes in corporate America except for REITs, because REITs don’t pay corporate income tax,” Anderson said.

The reform, which slashed corporate tax rates, was a boon to companies’ bottom lines. As a result, investors may be shifting their cash away from REITs to free up more resources to pour into stocks as the market cheapens.

“Other corners of the universe are catching a break here,” Anderson said. “That’s the trade that’s happening.”

REITs may also face pressure from higher costs of capital. The Federal Reserve is widely expected to tighten the money supply come March, and other investors predict that a higher issuance of U.S. Treasurys this year will bump up yields as the government works harder to find willing investors.

Even so—and although they rely heavily on access to leverage—REITs aren’t in immediate peril of ballooning capital costs, said Merrie Frankel, a consultant who heads Minvera Realty Consultants.

“REITs are thirsty for liquidity,” Frankel said. “But they have access to the markets. You have dedicated REIT investors, so [REITs’] spreads have been good on the issuance of bonds.”

In evaluating the correction, Anderson emphasized the need to take a sector-by-sector approach.

“Industrial, e-commerce, hotels: those sectors have been doing relatively well, because they’re tethered more to the interknitting of” a strong, healthy economy, the Mizuho analyst said.

Shopping center REITs, on the other hand, have staggered under the burden of accelerating competition from online sellers, he added. And healthcare trusts have suffered, as the sector faces fears that lower revenue and higher deficits will force the U.S. to cut back on medical spending.