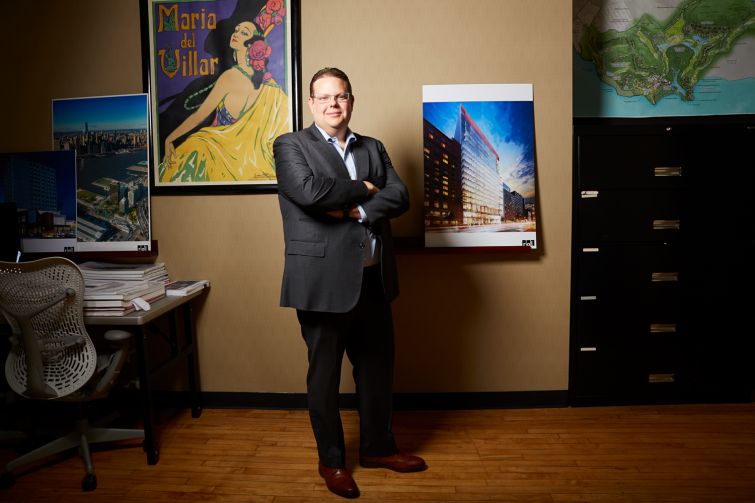 Spencer Levine, the 36-year-old director of landscape architecture and site development at RAL Companies & Affiliates, got his first exposure to the nitty-gritty work of real estate while still a teenager. His father, RAL Founder Robert Levine, was working with the Waldbaum’s supermarket chain and would bring his son on site at every opportunity, a chance for professional insight the teen fully embraced.

“I grew up immersed in the work my father was doing,” said Levine, who will now, among other projects, play a key role in developing the P.C. Richard site near Union Square into a new tech-focused job training facility. “We always spent our weekends going from job to job and seeing what was going on. I spent a lot of time at supermarket openings. I definitely grew up in the industry.”

Today, Levine oversees all the firm’s landscape architecture in addition to project management duties on numerous projects at any one time. Looking at his upbringing, it’s hard to imagine him having gone any other way.

Levine was born in in the Great Neck area of Long Island, N.Y., and was ushered into real estate as a way of life early on.

“One of the main missions of RAL is this kind of hands-on approach. It penetrated the family, this idea that we were all part of it, that we were part of facilitating something,” he said.

“Growing up, [real estate] was always the topic of conversation. It was what we did on weekends. On Saturdays, my father used to take me to the latest Waldbaum’s that was being built, and we’d meet with all the tradesmen. It gave me a true appreciation for the process of construction and how to put together a project.”

Levine was so enamored with his father’s working world that he turned his toy trucks into members of the team.

“I was the only kid who had his own landscaping team and his own structural steel team. I used to take the label maker from my dad’s office and label all my trucks, as far as what they did. It was very much a part of me.”

Following in his architect and urban planner father’s footsteps, he earned a bachelor’s degree from Cornell University in landscape architecture in 2003, then a master’s in the same from Harvard Graduate School of Design in 2005. He began working at RAL part time while still in school, and right after graduation, he became a full-time project manager, finding himself learning a broad cross-section of real estate tasks and skills.

“One of the things about RAL is that we’re a very diverse company,” Levine said. “We started as an architecture firm and still maintain a full architectural firm, including landscape architecture. But we do everything: property acquisitions, design, construction management and administration, property management. In our office, we all wear a lot of different hats, and we all pitch in. It’s very collaborative on projects. While I might have been a project manager, I was certainly drafting at that point, I was doing basic architectural work, and I was probably doing filing and copying. Whatever we have to do to facilitate what needs to be done that day is what we do. It was all part of the job.”

This embrace of so many aspects of his profession is part of what makes him a valuable asset for RAL.

Vince Cangelosi, the firm’s director of design and development, has known Levine since he was a teenager. He said Levine was always inquisitive and eager to learn and that his passion for the business has led him to master so many of its essential elements.

“He’s one of the best multitaskers I’ve ever met. He manages to have 12 to 18 balls in the air and not drop any, which is a pretty difficult skill,” Cangelosi said. “He’s managing projects from all aspects of development. He deals with financing and with scheduling construction—he really has a passion for the construction end of things. He gets really excited when we break ground, and he likes to be in the field, getting his hands dirty.”

Levine’s first projects at RAL full time included handling much of the landscape design for the gut renovation and redesign of the 1960s-era Parkwood Sports Complex in Great Neck (the renovation of which was conceived in 2004 and finished in 2008) and working on project development for Capella Telluride in Telluride, Colo., a $190 million, 450,000-square-foot development with a 100-room hotel and 48 residences that opened in February 2008.

He said that the nature of RAL renders job titles close to irrelevant, as the team ethos finds employees working in various areas in addition to their specialties. He received a crash course in this on the Telluride project, which he worked on for three years.

“That was my first major project out of grad school, and it was intensive. I was working with our director of construction and our head of acquisitions, and I served as the coordinating point person. That was the first post-tension structure built on the western slope in Colorado,” he said of the method for reinforcing concrete.

“Post-tension enables you to do a thinner slab structure on each floor, which gains you height overall. That building had a very regimented set of guidelines of what we could build. I came in during the design phase and started working with the hospitality companies, as at the time we were still choosing our [operator for the hotel]. I worked with the different operators to see how they might fit into the building.”

While immersed in this development education, Levine also learned how business can take a toll on relationships, as he missed the celebration of his six-month anniversary with his wife, Jordana. (They live in the Roslyn area of Long Island with their two children: son Liam, 7, and daughter Zoe, 5.)

“We got married while I was working on the project,” he said. “I spent our six-month anniversary hanging pictures to get the hotel ready for opening in Telluride while she was in New York. I’ll never forget it, and she’ll never let me forget it. We still have the Vermont Teddy Bear I sent her that says ‘Happy Six-Month Anniversary.’ ”

Since then, while landscape architecture is his primary purpose, he has continued working in whichever area he’s needed, from relationship management with his wife to project development with construction companies.

“But I’m also working in site development, which is a broader look at how we’re master-planning properties if they’re land deals, or how we’re developing and putting together proposals for specific properties,” Levine said. “So it’s very much a blended role.”

While on the Telluride project, he was also working on the development of One Brooklyn Bridge Park, which the company says is the largest residential conversion in Brooklyn’s history in addition to being its own largest project to date, involving over 1 million square feet, 438 luxury condominium units and parking space for over 650 cars. The development opened in 2008.

“That was a milestone project for myself and for the company,” he said. “My role on that was as the liaison between construction and the design and project management teams.” He added, “One of the mandates of Brooklyn Bridge Park was that it needed to be financially self-sustaining. We developed a mechanism where we turned the building over to the park and took the ground lease back on it, then they leased it back to us for development. Those ongoing lease payments, along with PILOT payments, which are payments in lieu of taxes, go to sustain the park. We worked very closely on that with state and city officials, along with lots of different legal voices. That was a landmark learning project for me.”

Levine also worked on Pier 6 at Brooklyn Bridge Park, a 423,000-square-foot development that included 339 units in two buildings, including luxury condos and both market-rate and affordable rentals. Suffolk Construction was the project’s contractor, and its chairman and CEO, John Fish, said that Levine’s leadership helped make the project flow smoothly for all involved.

“The first time I met him, you could sense immediately that he was extremely intelligent, both in IQ [intelligence quotient] and EQ [emotional quotient], and that he understood the business from the contractor’s perspective,” Fish said.

“A lot of times we work with developers who look at the project from the development perspective and don’t really understand the building side of the equation. Spencer had a tremendous sense of comprehension about what we do and how we as an entity fit into the [development] equation. That really gave me a lot of comfort.”

All of these projects helped prepare Levine for his current significant effort, the development, in conjunction with the city, of a 20-story, 240,000-square-foot training and educational center at 124 East 14th Street near Union Square, home until recently of a P.C. Richard.

“I’m going to be working with the architecture and interior design team on that, to detail and manipulate the landscapes on the roof and by the sidewalk,” Levine said. “But my overall role, I think, will be more project management.”

According to Levine, P.C. Richard, which sat on city-owned land, did not have its lease renewed because the city wanted a facility related to job training and creation on the site as part of Mayor Bill de Blasio’s New York Works plan, which intends to create 100,000 jobs for New Yorkers.

After submitting a proposal RAL won the rights to a 99-year ground lease on the site in December 2016. It has paired up with tech-focused coworking organization Civic Hall, which will operate a digital skills training center, a coworking space, and an event space available to community groups for reduced or waived rates. In addition, 124 East 14th Street will house temporary and permanent office space and a public food hall on the ground floor.

Construction is expected to begin in late 2018, and the building should be open to the public by late 2020.

Levine said the building will provide a much-needed resource that can be hard to find in the city’s hottest neighborhoods.

“[Programs like this] often can’t find space to operate their training facilities in, or they’re in the outer boroughs, and people that want these skills have to travel,” Levine said. “This is right smack in the middle of Manhattan.”

With a clear benefit for the community RAL’s 14th Street project is part of why Levine has such a passion for the work. But at its most basic, a passion for real estate is ingrained in Levine, making for a perfect match between a man and his career.

“What I love about the business now is not necessarily real estate development,” Levine said. “I love building projects, seeing how those projects impact communities, and seeing how our work comes together and becomes something. That’s something that was instilled in me from the beginning.”