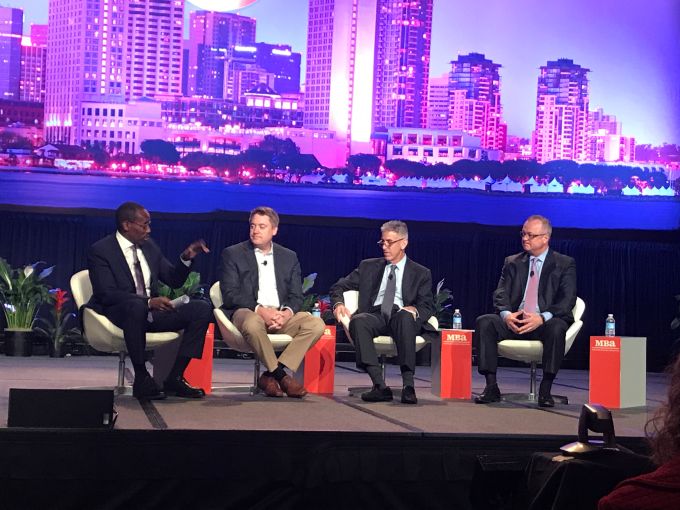 Perhaps the most widely discussed topic at MBA’s CREF/Multifamily Housing Convention & Expo in San Diego this week was competition.

As traditional and nontraditional lenders slug it out for their piece of the pie, Byron Boston, the CEO of Dynex Capital, refereed the Capital Source Convergence special session, where panelists discussed the blurring of lines among financing sources in the lending ecosystem.

Jeff Friedman, a co-founder of Mesa West Capital—which he described as one of the first  debt funds (“We’ll find out one day whether that’s a good thing or a bad thing,” he said)—spoke alongside KeyBank Real Estate Capital Executive Vice President Dan Baker and Mark Williams, a managing director at Eastdil Secured, who described his financial intermediary role as, “Going out into the ecosystem to find lenders that are best suited to each transaction. It’s kind of like a dating service.”

KeyBank is set to originate around $8 billion in balance sheet loans in 2018, Baker said, whose team is responsible for the origination, underwriting and distribution of permanent mortgage financing for its clients through various vehicles, including Freddie Mac, Fannie Mae, CMBS, FHA and investor placements.

Friedman joked that he was “crazy jealous” of KeyBank’s low cost of capital as a regional bank. “If we can have some of that, it would be appreciated,” he said.

But whether you’re a bank or a debt fund, you’re facing significant competition for every deal.

Eastdil has seen a remarkable uptick in the number of lenders it’s working with. Eastdil arranges roughly 225 deals per year; five years ago 80 of those deals were financed by different lenders. Last year that number jumped to 130—a whopping 60 percent increase. “The debt fund business has grown dramatically,” Williams said.

“I just wish everyone would leave my block. It’s horrible,” Friedman said and laughed, using the analogy that Mesa West once was one of the only “lemonade stands” on the block, but on that same block there are now 40 lemonade stands.

Additionally, the search for yield and a flood of competitive capital entering the debt funds’ territory—including a red-hot CLO market with a penchant for transitional assets—has driven once-high yields down to bank rates, Friedman said. And while banks too are struggling for loan growth, they won’t loosen underwriting standards to get ahead, but they will fight on pricing.

Adding insult to injury, “the life companies are coming at us too,” Friedman said.

Indeed, Eastdil recently arranged the financing of a core asset with a life company, which priced at L+130. “You wouldn’t have seen that 10 years ago,” Williams said.

Williams said that Eastdil has seen an “enormous amount of flow of capital” into the U.S. with foreign investors viewing it as a safe investment. “The search for yield has found a home in the U.S. debt market,” he said.

Baker concurred, saying that he is seeing great demand from Asia and that negative interest rates overseas are feeding the frenzy.

As Mesa West progresses through its merger with Morgan Stanley—after which the debt fund will be part of the investment bank’s investment management division—Friedman said that Mesa West believes the more interesting capital targeting U.S. real estate deals will come from outside the country. Because of this, Mesa West plans to leverage Morgan Stanley’s globally recognized name in developing overseas relationships. “[Foreign investors] know and feel comfortable with the Morgan Stanley name,” he said.

Friedman said he predicts more and more interest in the debt fund space and a lot more merger and acquisition activity going forward.

For now, the myriad of lending and risk appetites in commercial real estate finance means that no call for debt goes unanswered, which is one silver lining…right?

Well, that’s a matter of opinion.

“It sucks to have the 80 or so new debt funds out there,” Friedman said, but not for Williams who now has far more capital sources to call on—he simply responded: “My clients are happy!”