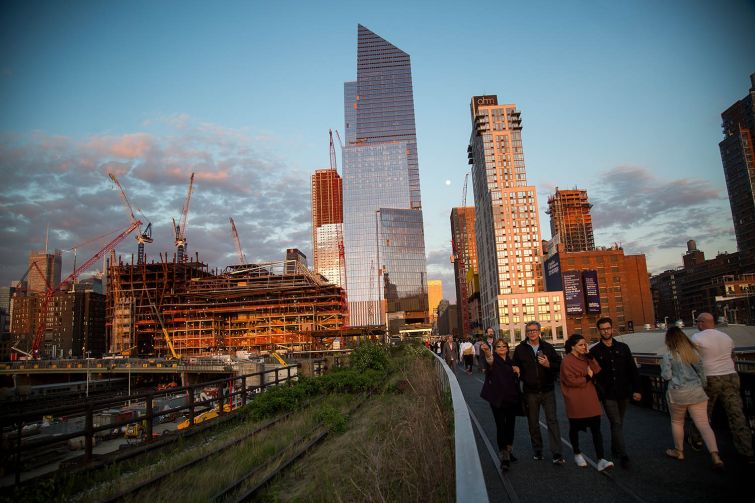 The city's decision to set the price of air rights in West Chelsea may affect development along the High Line. Photo: Michael Nagle/for Commercial Observer

West Chelsea property owners who want to sell their development rights for top dollar may soon have to compete with an unexpected player: the City of New York. The Department of City Planning revealed at a public session Monday that the city will sell the area’s remaining air rights for $625 a square foot, rather than letting the market set its own price.

The city is suddenly jumping into the air rights game because of an obscure zoning policy called the 90 percent rule. The City Planning Commission will vote on the rule change and price at Wednesday’s public meeting.

The Special West Chelsea District, which extends from West 16th to West 30th Streets between 10th and 11th Avenues, has an air rights transfer district that runs along the High Line. Since the city rezoned West Chelsea in 2005, property owners who wanted to develop in the neighborhood could get a floor area ratio, or FAR, bonus of 2.5 if they purchase at least half of their air rights from specific lots along the High Line. The other half of the added density could come from the inclusionary housing program, which requires developers of residential projects to set aside 10 to 20 percent of their units as affordable housing, or to build an equivalent number of affordable apartments on a nearby site. The base FAR for most sites in the district is 5, and the bonus brings it up to 7.5.

City planners realized last year that 90 percent of the High Line corridor air rights had been sold. So they decided to trigger the 90 percent rule, a clause in the zoning text that allows the city to step in, create its own pool of air rights, and sell them for a price determined by a weighted average of past sales from the past five years. If the City Planning Commission passes the new rule tomorrow, developers will be able to buy development rights from the city—at a price of $625 per square foot—instead of one of the few remaining lots along the High Line with air rights to sell. Those proceeds go to the West Chelsea Affordable Housing Fund, which the New York City Department of Housing Preservation and Development will use to develop and acquire low- and moderate-income housing. DCP arrived at that price by using a weighted average of the last five years of High Line air rights transactions in the district.

However, the pool of air rights is limited by the dwindling number of development sites that will be able to take advantage of them, as well as the relatively strict height and density limits that already exist. The city’s new price will favor buyers who paid much higher prices for West Chelsea air rights in the past. Sellers, on the other hand, may have to lower their expectations, said Brian Strout of City Center Real Estate, a brokerage that specializes in air rights transactions. Six Sigma NYC’s Jason Lee paid $800 a square foot for development rights in November 2016, and some buyers have paid as much as $1,130 a square foot, according to DCP data.

“People that have had some of these TDRs [or Transfer Development Rights], they’re still advocating that the city push up the pricing so that they can sell what they have at a higher price,” Strout said.

Land use attorneys agree that the city has to walk a tightrope when it comes to setting the price of air rights.

“The city doesn’t want to set the price too low because they want to get the most bang for their buck, so to speak,” said Jim Power, a partner at Kramer Levin Naftalis & Frankel. “They also want to be careful because people have made purchases based on the market pricing mechanism that’s been in effect up till now. It shouldn’t put them at unfair disadvantage or give them a windfall.”

Planners argue that the intention of the zoning rule was to allow development to continue even after the supply of development rights dry up. But the city may have set the price too low, based on air rights sales that entered contract years before they were actually sold, Strout argued. Some air rights deals, for example, closed far below market rate at $100 or $200 a square foot. Buyers can enter contract to purchase development rights and then “flip” the contract and sell them at a much higher price, but the transaction will be recorded with the city’s Department of Finance in the Automated City Register Information System, or ACRIS, at the contract’s original price.

Major developers have bought flipped air rights contracts in order to build projects before. Harry Macklowe purchased the contract for air rights so he could assemble enough square footage to build 432 Park Avenue. ACRIS shows the amount that the original buyer, Host Hotels & Resorts (who Macklowe bought them from), paid and not the price that he paid. As a result, public records make it seem like Macklowe paid much less ($250 a square foot) than the actual sale price, which was “north of $900 a square foot,” said Strout, whose brokerage was involved in the deal.

“When someone assigns, or ‘flips’ an agreement to buy development rights in the High Line Transfer Corridor, you’re really dealing with two transactions,” said Michael Smith, a partner at Herrick Feinstein. “The first, which is subject to New York City transfer taxes and shown on ACRIS, is from the seller to the ultimate purchaser; and the second is the unrecorded assignment of contract from the original purchaser to the ultimate purchaser, which is not subject to New York City transfer taxes and not shown on ACRIS. Because of that, it may be impossible, just by looking at ACRIS, to figure out the true price paid for a flip of development rights.”