Berkadia’s Hilary Provinse on Her New Role, the Health of the Multifamily Sector 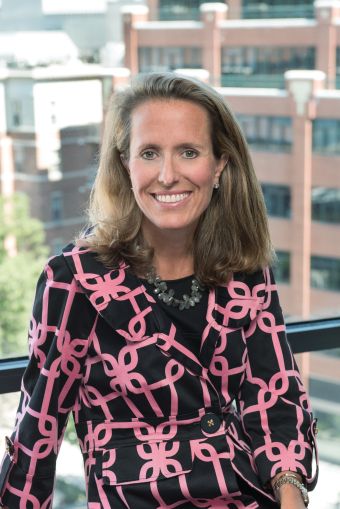 Industry veteran Hilary Provinse joined Berkadia in November 2017 after 15 years at Fannie Mae, where she led the multifamily lending activities of offices throughout the U.S. In her new role, Provinse is focused on originations, overseeing 130 mortgage bankers across 31 offices. She sat down with Commercial Observer in December 2017— a few weeks into her new role—to describe her career path, the health of the multifamily sector and Berkadia’s focus on increasing diversity in the industry.

Hilary Provinse: I grew up in D.C. and I’m a fifth generation Washingtonian. My father was actually in commercial real estate—he managed private equity funds. So, even when I was really young I would go and look at properties with him.

So, real estate was always discussed around the dinner table?

Yes, and I think I took it for granted. As a typical kid I’d say, “I do not want to go and work for my father. I am going to go and chart my own course.” So after college I moved to New York and worked in investment banking for a number of years but not in real estate. I was at Bear Sterns for four years then got my MBA and went to Goldman Sachs as a bond trader. I loved it, but at heart I’m a smaller-town girl, and so at the beginning of 2001, I decided to quit and move back to Washington. Goldman asked me to stay three days a week and that way I could go back to D.C. every weekend. I thought that sounded pretty great, so I accepted. It was nice for a while, and then 9/11 happened. I was actually in D.C. that day, but I decided once and for all that I really didn’t want to go back and forth to New York anymore. I quit Goldman, and they understood—everyone was making life-changing decisions after 9/11.

I was trying to get a job in D.C. as a bond trader, which is tough. There aren’t a lot of fixed-income places in Washington; Fannie Mae and Freddie Mac were the main ones. When I joined Fannie, it was on the fixed -income side, and that’s when I learned that Fannie Mae even had a commercial real estate division; I had just assumed that it was a single-family business. I joined the commercial real estate side of the business in 2003 and was there until [I joined Berkadia].

So you were there through the global financial crisis and Fannie Mae’s conservatorship: How was that experience?

It was kind of all I knew. The accounting scandal [in 2006] happened right after I got there, and then one thing after the other happened. The financial crisis I’ll never forget. I had my first baby in 2008, and that’s when Lehman Brothers was failing, and all my friends at Bear Stearns were in tears carrying their boxes out of the office. It was terrible. I was a nursing mother at home watching CNBC and it was like watching a soap opera at the time. So for me, Fannie was a good, safe place to be despite the crisis because people still needed homes. Even though we went into conservatorship, it wasn’t like Bear Stearns where they were shutting the doors—I still had a job. If anything, its importance was greater because Fannie was needed more than ever to stabilize the housing markets. It was also good for me personally because one thing that’s great about the agencies versus Wall Street is they have a natural bias toward diversity and were super supportive of me as a new mother to two babies within 18 months. My job opportunities just kept getting bigger, and I think I was very lucky to be there.

How did the Berkadia opportunity come about?

In 2018 I would have been with Fannie Mae for 15 years, so I started feeling ready for a change and a new challenge. I wasn’t unhappy, but I’d done everything I wanted to do there. The nice thing about my job was that I had a platform to be able to see all the other lenders in the multifamily market from my seat. I was always impressed by Berkadia’s management team, and coming from a regulated entity like Fannie Mae, I didn’t want to go work for a bank because I felt it would be too similar. Berkadia is privately owned, and it has great ownership [Leucadia and Berkshire Hathaway] that is not just interested in the next quarter or six months from now: They’re interested in five years, 10 years from now. I like the long game.

What is your role at Berkadia?

I am the head of mortgage banking. Berkadia has two platforms: investment sales and lending and mortgage banking. So I’ll be managing the network of mortgage bankers on the lending side. We have 31 offices and 130 bankers. My job is ultimately managing them from a strategy standpoint, improving the client experience and growing our [market] share by recruiting or building new talent. We want to grow and develop junior talent, and Justin [Wheeler, the chief executive officer of Berkadia,] recognizes that our industry isn’t very diverse—so, how do we get more women and minorities interested in mortgage banking? The customer side is very diverse. Berkadia wants to focus on diversity not because we are trying to please a regulator or stockholders—it’s just good business. So, as we grow talent, that’s something I personally care about, and I just think it’s the right thing to do.

You’ve been in the multifamily sector for a long time; how is the health of the sector right now?

Every year I’m shocked that the health of the sector is still so good. Not because the fundamentals aren’t leaning in that direction. It’s just been such a long run. There is health in the sector, but my sense is that something squirrely is going to happen. So, something geopolitically or with interest rates—who knows what will happen—to change that trajectory, and something that is not an underlying commercial real estate fundamental. The debt side of the market I don’t see much change in—we’re still seeing refi and sale activity, and I think that will continue for a while. I see more changes on the equity side because you can’t get the yields. Five years ago, Lonestar and Blackstone and Starwood and all the big private equity firms were able to get 20, 25 percent returns because multifamily was growing so much, but I can’t imagine that rents can’t keep increasing—people can’t afford it. Who the equity is is also changing. It’s more international funds today that are willing to accept lower yields because they are comparing multifamily to a bond. It’s relative value; they’re thinking, “I can put my money in bonds, but interest rates are so low that, if I can look at little bit higher yields with multifamily, which seems fairly stable, then why not?”

Where are we in the cycle?

I hope we’re in the seventh inning, but we’ve been saying that for four years. That was another reason that Berkadia made sense for me: I’m not worried about where we are in the cycle because what we’re building is patient and longer term.

What’s a piece of advice you’d give to someone entering the industry today?

The human side of our business is so important, and I think if you focus on listening to your customer, asking questions, being urgent, trying to work hard, all the basic things that improve someone’s experience then you can be successful. It’s not just about making a loan: Ask yourself what value you’re delivering to your customer.

What’s first on your agenda at Berkadia?

What are your 2018 resolutions?

I used to be a very good reader and just stopped reading as I was so busy. Last year, I made a resolution to read two books a month, one fiction and one nonfiction. I did it through July then dropped to one book a month. So this year I’m doubling down again.