The Times Sublets 140K SF at Its Headquarters to Financial Firm 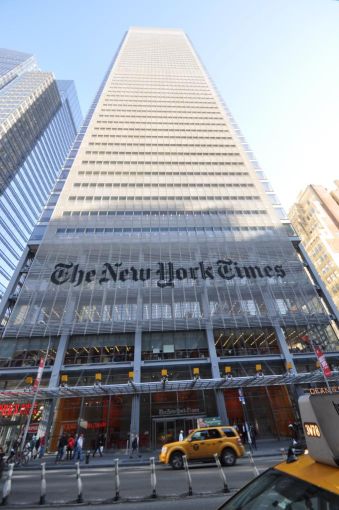 The New York Times has subleased a large chunk of its Times Square headquarters to financial trading network Liquidnet.

The Gray Lady struck a deal to sublease “a little more than” 140,000 square feet to Liquidnet at 620 Eighth Avenue, the newspaper’s 52-story home between West 40th and West 41st Streets, The Real Deal reported.

While the length of the lease wasn’t disclosed, asking rent for the space was $78 a square foot, according to TRD.

Liquidnet has made its home nearby at George Comfort & Sons’ 498 Seventh Avenue for more than a dozen years, according to CoStar Group. The institutional “dark pool” trading platform occupies 129,000 square feet in the building and plans to move out at the end of 2019. It subleased 30,000 square feet to the Michael J. Fox Foundation in 2011 and 29,416 square feet to Alloy Digital in 2013.

Mitch Konsker of JLL represented Liquidnet in the transaction. Newmark Knight Frank’s Andrew Sachs handled the deal for the Times. Spokespeople for both brokerages did not respond to a request for comment.

The paper has been searching for subtenants for a while. In December 2016, the newspaper put 250,000 square feet of space across eight floors on the sublease market in in order to generate some extra cash. The Times occupies the lower portion of the 1.5-million-square-foot tower, which was developed in conjunction with Forest City Ratner and designed by Renzo Piano Building Workshop and FXFOWLE Architects.

The paper of record vacated several floors last February to make way for an “extensive redesign” of its offices, moving 400 employees to 160,000 square feet of subleased office space at 1271 Avenue of the Americas, as Commercial Observer reported at the time.