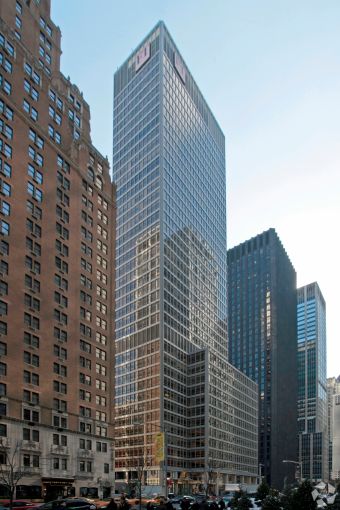 DekaBank has provided a $285 million loan to RXR Realty for 1330 Avenue of the Americas, property records show. The loan replaces and consolidates previous debt on the property with a new five-year, $97 million mortgage.

In 2011, New York Community Bank provided a $200 million loan on the 40-story building, located between West 53rd and West 54th Streets. That debt supported RXR’s $400 million acquisition of the tower, which was built in 1965 and renovated ten years ago.

RXR’s 2010 acquisition of the property, designed by Emory Roth & Sons, culminated longstanding interest in the building from Scott Rechler. The RXR CEO had long pestered 1330’s previous owner, Harry Macklowe, about its availability, and was finally able to put the deal together on short notice while preparing to attend his niece’s bat mitzvah, The Real Deal reported.

DekaBank itself owned the building before Macklowe, and still leases a suite on the 21st floor, according to data from CoStar Group. That association gave the lender such deep familiarity with the asset that the loan was a no-brainer, a DekaBank executive said.

“Being a tenant, we’re here every day,” said Jason Oliver, a director at the institution. “We like the building, and we like what RXR has done to the asset. They’ve been so successful with it.”

The property manager has sought to make leasing efficient for tenants by building out ready-to-use offices when vacancies pop up, and a good chunk of the latest financing will fund that construction.

The idea is that “the tenant can just move right in—there’s nothing to be done,” Oliver said. “It’s a plan which had already been taking place before we financed the building, and they’re going to further that plan along and complete those build-outs.”

When Macklow owned the trophy asset, its $187 million mortgage was securitized in the Deutsche Bank-sponsored COMM-FL14 CMBS transaction. That loan was paid off when RXR purchased the building.

Representatives from RXR and DekaBank were not immediately available for comment.