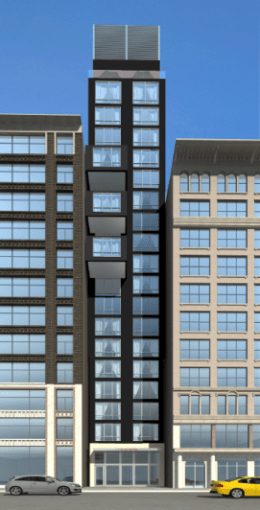 The developer of a NoMad site that was slated to become the boutique-style Prime Hotel has filed for Chapter 11 bankruptcy, according to court documents filed yesterday.

New Jersey-based Hag Gyun Lee, the president of Eden Ascel Corp., filed for voluntary bankruptcy for 17 West 24th Street between Broadway and Avenue of the Americas.

As Commercial Observer previously reported, Lee was planning an 18-story hotel with 68 guest rooms, a restaurant and a 1,000-square-foot rooftop lounge with a bar. The hotel had a completion date of June 2016, project architect Gene Kaufman, the founder and principal of GKA and whom Lee owes $38,260, the bankruptcy filing indicates) previously told CO.

Lee’s filing “was precipitated by disputes with certain lenders (i.e., Century Capital Partners…and Century 24th Prime Partners…) concerning amounts loaned or agreed to be loaned to the debtor to refinance certain existing mortgage obligations and to fund the project,” according to the bankruptcy filing, obtained via Nationwide Research Company. In 2016, those disputes ultimately led to Lee’s “abandonment of the project for lack of funding,” Century 24 launching a foreclosure action (still pending) regarding a July 2015 $7.3 million mortgage against the property and the “commencement of a separate breach of contract action by Century Capital for a $16 million construction loan that didn’t close.”

Lee alleges that he had a contract to sell the site last August but all of the issues with the lenders “frustrat[ed] the parties’ efforts to close on the contract of sale,” on Dec. 13.

Adam D. Stein-Sapir of Pioneer Funding Group, which specializes in analyzing and investing in bankruptcy cases, and who is not involved in the case, offered: “They tried to sell the property but because of a new lien and almost $1 million of extra disputed late fees alleged by the lender the sale fell apart. Then they filed for bankruptcy to avoid a foreclosure sale.”

Attorney Douglas Pick of Pick & Zabicki, who represents Lee, didn’t immediately respond to requests for comment. Kaufman’s representative said he declined to comment aside from noting that “the last work done on this job by GKA was two years ago, in February [or] March of 2016, so they are quite distanced from the project.”