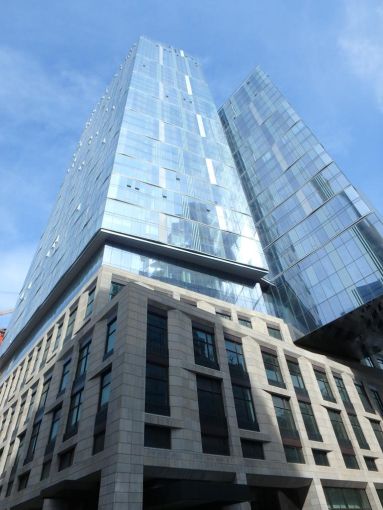 The El AD Group and Silverstein Properties have locked in a $308 million loan from Deutsche Bank to refinance One West End—a condominium property that’s part of the sprawling, seven-building Riverside Center residential development, according to records filed Wednesday with the New York City Department of Finance.

Deutsche Bank assumed roughly $184 million in existing debt on the property that was previously held by Wells Fargo and provided an additional $123.7 million in the form of a gap mortgage, bringing the new total debt to $308 million.

Records show the financing, in part, is dedicated to 109 of the building’s 246 condominium units as well as two parking garages adjacent to the building and one retail condominium.

The 42-story luxury condominium building—completed in 2014—is located at One West End Avenue, with an alternate address of 601 West 59th Street. The tower offers 246 condominiums from floors eight and above, according to the property’s website.

The property includes a doorman, a concierge, a children’s playroom, a fitness center with a 75-foot-long indoor swimming pool, and a spa, according to the the property’s website.

In October 2014, Commercial Observer reported that Silverstein and El Ad were seeking $500 million in construction financing from a consortium of banks to begin the project. The syndicate of banks was led by Wells Fargo and Bank of America, both of whom were involved in providing the development duo a $123 million loan for the $160 million purchase of the Midtown West land from the Carlyle Group in December 2013, as CO previously reported.

Wells Fargo eventually led roughly $350 million in construction financing for the tower in 2014.

At the time of the construction financing, sources told CO that the project was particularly attractive to banks due to the low cost per square foot paid by Silverstein and Elad.