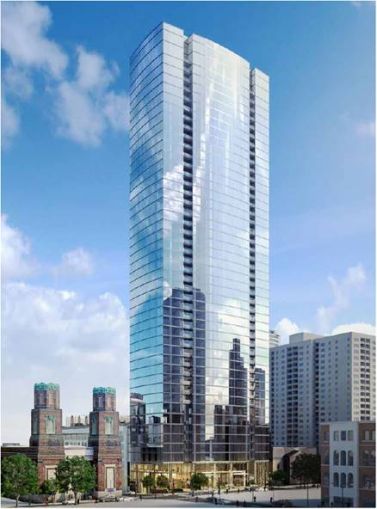 JLL Chicago’s David Hendrickson brokered the 60-month loan, which refinances a $93.9 million construction loan from Bank of the Ozarks as well as previous $37.6 million mezzanine loan from LaSalle Investment Management.

The 45-story, 550-unit luxury skyscraper at 505 Church Street is Nashville’s tallest residential tower at 543 feet tall. Its amenities include a salt water swimming pool, a tennis court, a fire-pit lounge, a bocce ball court and a dog park.

The upper 16 floors of the building house 193 condos, while the lower 29 floors contain 350 apartments. The property also includes one acre of amenity areas and 10,000 square feet of retail.

ACORE and LaSalle’s refinance is specifically for 505’s low-rise apartment component. Arkansas-based Simmons Bank is financing the high-rise condo component with a $40 million loan. Tony Giarratana, the founder and president of Giarratana, told CO that he expects to sell all 193 condos in the first quarter.

Giarratana has owned the property since 1993 and built several residential towers around the site since then. “Pre-recession, I had planned to build a 70-story tower at the site, but the great recession scuttled those plans,” Giarratana told CO.  He revived 505’s development plans in 2013 to include a 60-story residential and retail tower. The plans were approved but financing was only available for a 45-story tower at the time. “We would have been happier at 60 but we’re thrilled at 45,” he said.

Giarratana decided to refinance the property’s construction loan early as his previous loan agreement did not allow for the sale of condos. The construction loan was set to mature in Dec. 2018 but had two one-year renewal options. A lock-out was in place until Dec. 2, 2017 and the refinance closed on Dec. 15.

“We are pleased to complete the mezzanine portion of the refinancing at 505,” Matt Jordan, a managing director of acquisitions at LaSalle Investment Management, told CO. “This top-of-the-market asset is well-located in the heart of downtown Nashville, within walking distance of numerous employment centers and entertainment venues. Downtown Nashville continues to attract both tourists and residents with its wide variety of restaurants, entertainment, live music and sports. These attributes coupled with the area’s employment growth, infrastructure and proximity to major highways make it a dynamic ‘live, work, play’ market that we think is well-positioned for sustained growth.”

Today, 505 is the tallest residential tower in Nashville, and it would be the tallest overall if it weren’t for the antennas on the city’s AT&T building.

“This was a complicated deal because of the condo element, which was not part of the collateral,” Lance Wright, a managing director at ACORE, told CO. “We moved quickly over the holidays to get it closed but this deal really checked all the boxes: a top-notch, local sponsor, best-in-class trophy building with everything a resident could ask for and more, one of the hottest markets in the U.S. from an employment growth and population growth standpoint. It’s a great property.”