Tax Bill, Amazon and King James All Bandied About at ICSC NYDM 2017 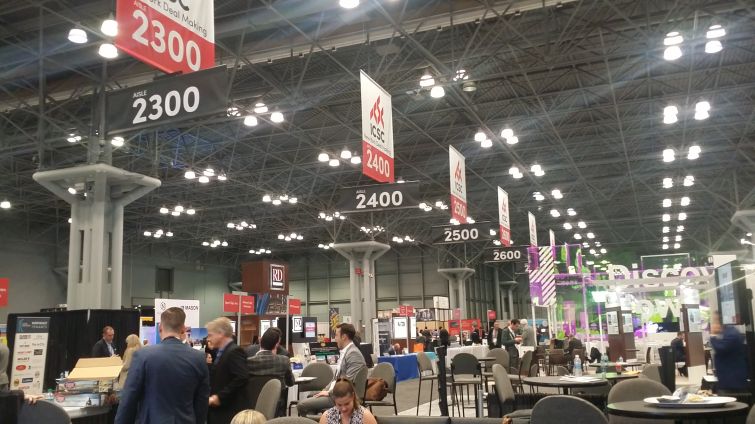 The challenging headwinds facing the brick-and-mortar retail sector have been all the talk this year, but that hasn’t stopped the International Council of Shopping Centers from scaling up its annual New York Dealmaking conference to bigger than ever before.

This year’s event was stretched to three days from the usual two, with proceedings kicking off on Tuesday and wrapping up today. ICSC also took an additional level at the Jacob K. Javits Center on Manhattan’s Far West Side, expanding to the venue’s third-floor exhibition hall—bringing the trade show’s total amount of exhibition space to around 220,000 square feet, roughly 35,000 more than last year, according to an ICSC spokeswoman.

The conference’s more than 500 exhibitors and over 10,000 expected attendees were also slightly above last year, ICSC said, despite a no-show from major mall landlord Simon Property Group. The keynote lunch presentation today, meanwhile, featured Dan Gilbert, the Quicken Loans magnate and Cleveland Cavaliers owner (who would not be drawn on the future of LeBron James, the Cavs superstar whose contract is up after this season).

“While the show may have lacked the usual reckless abandon energy, I found everyone I met with was laser-focused on what they wanted,” according to Newmark Knight Frank‘s Jeffrey Roseman, who said the atmosphere at this year’s show “actually made for much more efficient meetings.”

See below for some of our tweets from the conference and related parties:

Kyle Ashley of @WarbyParker said they spend the most digital marketing dollars on @facebook, not Google. And they've recently started testing Instagram. @Pinterest was not successful for them. #ICSCNYDM

Barry Beck on @amazon … "We've already beaten Amazon. We don't see Amazon as a threat. I'm in your neighborhood already, we are more convenient than Amazon." #ICSCNYDM

Michael Hirschfeld of @JLL tells us at #ICSCNYDM that on Bway from Houston to Broome Streets in #Soho, retail leases will get done at a rent of $270 to $320 a foot.

Dan Gilbert says he confident that Amazon will chose Detroit for it's new headquarters… (Before backtracking and saying he's not certain.) #ICSCNYDM

"People buy a home to live in it and raise a family. It doesn't matter what the deduction is," Dan Gilbert on mortgage interest deduction. #ICSCNYDM

Dan Gilbert on @KingJames staying with @cavs "Truth of the matter is, I don't know. We text… but don't bring the subject up." #ICSCNYDM

Garrick Brown of @CushWake told us that he thinks the GOP tax bill, if passed, will spur a bump in sales of luxury goods because it's a tax cut for wealthy families #ICSCNYDM

.@CushWake retail brokers Sean Moran and Steven Soutendijk predict that food and home goods will be the two biggest areas of retail growth in NYC next year #ICSCNYDM