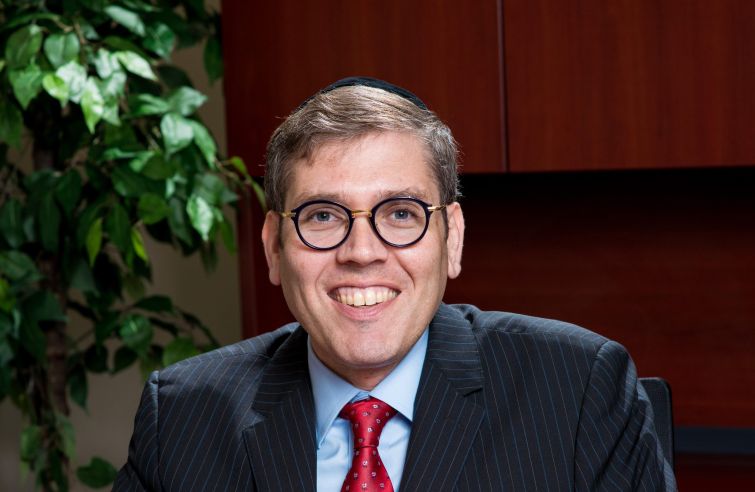 Ira Zlotowitz has never been afraid to write his own script. As president and CEO of Eastern Union, Zlotowitz has made a name for himself as a relentless innovator, building what he founded as a two-person firm in 2001 into a still-growing company that did over $3.5 billion of business in 2017. Two years ago, Eastern Union announced it would cap fees on any deal at $135,000, a move intended to stake out territory in what Zlotowitz saw as a streamlining market. Brokers at the firm at first resisted the one-year program, but soon realized that the increase in business more than offset the lower percentages they’d make on any given deal.

Now, as he angles to double market share next year towards the $8 billion mark, the brokerage founder is focused squarely on how to move as much business through his shop as will fit through the door. The 42-year-old father of five—Zlotowitz has a foster child and a son-in-law he considers his son in addition to three of his own offspring—talked to Commercial Observer last month about building market share, organizational innovation, and his bottomless appetite for data on his own company.

Commercial Observer: How was business this year?

Ira Zlotowitz: Business is going very well, thank God. It was a great year. As a firm, we made heavy investments into better people, better relationships, data and technology. I think we’ve perfected the art of melding all three into one nice symphony. We’re seeing the results across every platform within the company.

How about the bottom line?

This year we should be up about 10% from last year, which is a pretty impressive number when the market is flat, and you’re reading articles saying that everything is flat or has gone down.

So you’re saying you’re able to outperform the market?

They say that many people in real estate play a herd mentality. I would rather try to be innovative and ahead of the curb, and try to lead. Sometimes you lead too far in advance, and then you turn around and no one’s behind you.

Give me an example.

Technology wise, we spent money and overbuilt on technology years ago, and the market wasn’t ripe for it. We built an app several years ago when you weren’t able to get enough speed on your phone, and people didn’t have unlimited data. Today, it caught up to us, in that we had the whole foundation built. Now we’re able to dust off some of the things we did in the past and utilize them.

What use does an app have for a mortgage broker?

It has amazing calculators. It gives a real estate professional the ability to do all his underwriting on the go, in many cases with better calculations than he has in his office. It has live rates. It has a newsfeed. It has contacts, and it has comps. These are the features that every real estate player needs at every time. When a broker leaves the office, he is just as efficient on the road as he was in the office. I went to Israel, and someone said, “Oh, it must take you a few days to catch up again.” No—I didn’t lose a beat while I was there.

What’s most important capability it gives you?

Every deal that’s being worked on, I am linked to every person in the office whose work is involved in the deal every step of the way. I can see who my client is, the documents, all the quotes, I can see where the loan is holding throughout underwriting.

You’ve built Eastern Union from a two-person shop to a company that employs about 120. How did you decide how the firm should be organized?

Every single person has strengths and weaknesses. Someone who’s very good—that just means that on a scale from one to 10, they’re an eight out of 10. But there are still two things that they’re usually not good at—different things. So I found an expert in every segment of the business and I built a team around that person. Now, when a broker brings in a deal, he runs it, but he needs assistance for steps two and seven. Instead of just winging it, he now has an expert in two and an expert in seven. Another broker needs help in three and five—so he has assistance in three and five.

Did you ever see it as a risk to use such an unconventional structure?

I live by the motto, “live for today, without sacrificing tomorrow.” When I first started building out these expert departments and the technology, I started with steps that would certainly help everybody. So I found someone who was great at numbers only, and I [hired that person] to offer that person’s services to every broker in my office. The only risk I took was spending money. When a broker said, “No firm does it that way,” I’d say, “OK, so don’t use them.” Slowly but surely, people started using that expert. And then I went to the next step of expertise and the next step of expertise and I kept moving accordingly.

You spoke before about leading too far ahead. Can you give an example?

The one part where I went too fast for the market was when I changed pricing models. I came up with different products regarding pricing models, that seemed to be way ahead of how it’s done. I learned it’s just that people assume.

It sounds like your guiding philosophy is to build a company where your brokers can be maximally productive.

Correct. I’m very into data analytics. So I track every the company makes, and who’s the best out of every department. I use it has a teaching thing. That’s one place we keep getting better. At the same time, [we help] brokers to spend less time on opportunities that don’t come through, because they have better support and technology helping them. The broker, he now has more time available to him, so he can now bring in, say, 13 opportunities, instead of 10. The net result is that he will double his production working the same number of hours.

And that’s translating into results?

Analysts are working smarter, and the conversion rates are getting better.

What’s your next area of growth?

I’ve been focusing my energies on areas where there is a tougher barrier to entry, and where I can provide value. So we launched a bridge loan program. And the biggest growth in the company is a service I’m providing to investment sales brokers throughout the country. We launched this a month ago, and today we’re going to break 500 sales brokers.

What’s the play there?

I was able to take all these resources available to my brokers and offer them as a free service to investment sales brokers in the hope that down the line, it will convert into business for us. We’ve taken the whole brand, and we’re leveraging it up to help sales brokers.

Is there any concern that your attention is too widely split?

We’re not going all over the place. We’re in one place. We [try to be] the trusted advisor completing the capital stack.

Is running Eastern Union ever more than you bargained for?

A very big strength of mine is delegation. I delegate before the need to delegate. Most people delegate when their days are full. You delegate so you can take on more work. I delegate to a point where some days, even if I had nothing else to do, I would delegate so that when something came my, I was available.

What kinds of people do you like to hire?

I hire potential. I hire someone with a drive and heart and a willingness to do the work it takes to succeed. Once I find the right potential, I invest. My biggest competitors, all they do it look to poach my staff. “If Ira trained the person, they’re great anywhere,” [they think]. I look for people who will be very happy in what they do.

Once someone is on board, how do you help them succeed?

Are you saying you can take anyone and make them into a quality broker?

My mom taught me to take the good out of every person. There’s a role for everyone in this business. The ones who have a tough time making it are the ones who have an ego. I like starting with people for whom it’s their first time in the real estate business, because their ego hasn’t been developed yet. You need to have an ego here, but I’d rather their ego be a healthy ego.

It sounds like you’re endlessly introspective about how the company is doing. Do you apply that way of thinking to your personal life too?

Growing up as an Orthodox Jew, [I believe that] everything comes from God and you want to make sure you’re doing the mission of God. You always reflect back and ask yourself, if you step off course, how do you get back on?

There’s not really anything that worries me on the real estate side. If interest rates go up, things will slow down. I don’t really understand the ramifications of [the proposed tax reform] and how all of that will play out.

What are your projections for Eastern Union?

From my end of it, I feel like, based on all these initiatives including our new bridge financing department and the broker affiliate division, I’m really gearing up to double market share next year. If the market does the same amount of business [overall], I’m hoping to do $7 billion or $8 billion next year. I’m very optimistic about the company’s prospects, and I think we’re really just getting started.

I always thought of the market as being $350 billion to $450 billion, so that would put me roughly at 1 percent market share. But that doesn’t really come into context, because in our industry, there is no market share leader. The number-one firm might be at 10 percent. Let’s put it this way. I think that real estate—commercial real estate—is going to finally really get hit next year with [a wave of] technology, data, and all that stuff. And I think I’m the leader in those areas.