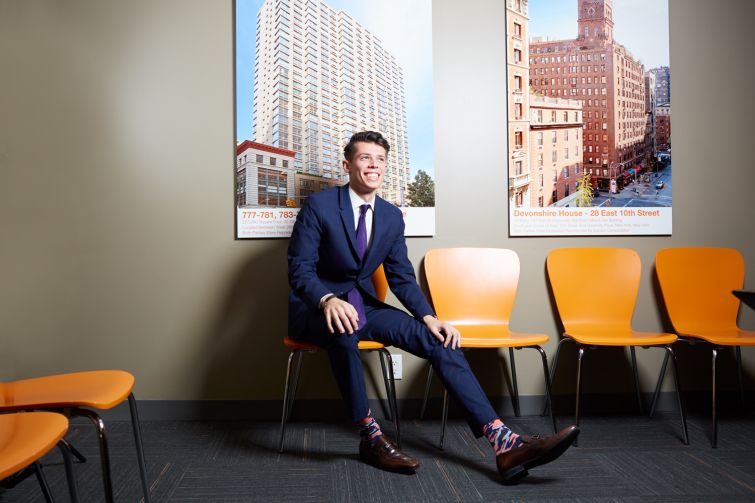 Being a millennial has its advantages in the commercial leasing business: You have your finger on the pulse of trends, you’re adept at using social media, and similarly aged potential clients think you “get” them.

That’s what has appealed to Jack Liang, one of the founders of the PokéSpot and Project Cozy, about his primary leasing agent, Max Swerdloff of Eastern Consolidated.

“We’re all pretty new-generation entrepreneurs,” Liang said. “We’re all around the same age, 30 and under. He kind of relates to our problems. He kind of knows what’s in and what’s now.”

Liang and his partners turned to Swerdloff and a senior colleague on James Famularo’s Eastern retail leasing team, Jeff Geoghegan, after their broker from another firm was unresponsive. The Eastern duo found the PokéSpot’s first location at 120 Fourth Avenue in April 2016 (which opened last August). After that Swerdloff and Geoghegan negotiated a second lease at 25 Cleveland Place (it opened this April) followed by a space for another Liang-affiliated retail concept, Project Cozy, on the ground floor of New York University’s dorm at 398 Broome Street. That opened in the summer.

“Every single deal is so different, and that’s what I really love about it,” he said. “This 48th Street deal we’re working on, I’ve learned so much by working on this one. There are a lot more moving parts than a lot of other deals when you’re doing a triple-net lease on an entire building.”

Famularo brought Swerdloff onto his team in November 2015, not long after the Westchester native started at the firm, and as a quick learner, it wasn’t long before the sales associate was going solo on showings, preparing proposal submissions and doing actual negotiations.

Today, Swerdloff is the point person for some of the team’s biggest clients, like Kushner Companies and its East Village portfolio.

Nicole Kushner Meyer, a principal of Kushner Companies, said she credits Swerdloff with leasing 13 of the 13 retail vacancies in the landlord’s 2,000-residential unit Lower East Side and East Village portfolio in about a year and ahalf.

What has made the assignment challenging, she said, is finding tenants that don’t require a liquor license (the Lower East Side community board has been stingy about handing them out as of late). In addition Kushner Companies only wants credit-worthy tenants that will serve as an amenity to the residents upstairs.

“He’s really been fantastic in regards to his energy and canvassing tenants and understanding what we want,” said Kushner, the wife of Commercial Observer’s publisher.

Swerdloff was a good pick for the assignment because he lives (with a roommate) in the neighborhood. “You really got to be boots on the ground,” he said, “because these smaller spaces and these deals they transact really quick.”

Bullard said Swerdloff is aggressive but not too aggressive.

“I have found with him he doesn’t drop the ball,” Bullard said. “He doesn’t let time linger on deals. He’s proactive in moving the deals along. There’s the old adage, that time kills all deals. He lives by that.”

Indeed, during an interview with Swerdloff at Eastern’s Midtown offices last week—during which he was dressed in a Zara navy blue windowpane-checked suit, a Barney’s silk purple tie and colorful camouflage socks—he referenced that adage.

Famularo likes bringing Swerdloff along for presentations. “He’s articulate, and he presents well,” Famularo said. “Nowadays people want to see the yin and the yang in a brokerage.” Meaning, an older and a younger team member.

A sluggish retail market isn’t beating down Famularo’s eight-person team. Last year, the group was closing two-and-a-half to three deals a month. Now, they are up to five a month, Famularo said.

On Sept. 29, the team closed four leases on the same day on the Lower East Side and in the East Village—I Love Kickboxing at 43 Essex Street, Best Wingers at 174 Delancey Street, Chelsea Thai at 192 First Avenue and Mama Fina at 167 Avenue A.

“What we’re able to do—when you have control over a neighborhood like that,” Swerdloff said, “we get a call from each of these tenants, and instead of having to take a week or two weeks to find spaces and schedule a tour, we say, ‘When do you want to meet down there—in an hour—two hours?’ And we just take all the keys off our windows for each space. We show them 15 spaces in the neighborhood, and at the end of the tour, it’s ‘Which one do you want to put in [a letter of intent] at?’ It benefits each landlord because we end up leasing all of the spaces that way. [Tenants] don’t feel like they are seeing one space, and there are 14 other vacancies, and they’re like, ‘Why would I pick this one?’ You’re showing them every space in the neighborhood, and they feel comfortable, and you’re usually educating the tenant on the neighborhood.”

The team’s success, Famularo said, is due in large part to its responsiveness and social media activity on Instagram, Snapchat, Facebook and LinkedIn. Among the tenant leads Famularo and Swerdloff scored from social media areBang Bang Tattoo at 62 Grand Street, Viking Waffles at 137 Avenue C and Harvest of the Sea at 92 Rivington Street.

“We sourced [Harvest of the Sea] through social media, blasting through the Smorgasburg’s website actually,” Swerdloff said. “We went through all Smorgasburg’s Instagram. We pulled out each tenant that’s at each of their markets, and we individually cold-called them. This is actually two tenants from Smorgasburg that happen to know each other and teamed up together.” Harvest of the Sea should be open by the end of the year.

To maximize the effectiveness of their social media posts, Famularo’s team invests in best practices.

“We literally meet once a week with a disruptor in the [tech] industry, right there in the back of the office, and [they] tell us what they’re doing, see if we can work with them and even just give us ideas,” Swerdloff said. “We had SEOers come into the office. We SEO all of our posts. We have a team website that we SEO. We have Instagram accounts for our team that we SEO. And we actually pay people to work our social media. Just our team specifically. And we believe our responsiveness and being on the cutting edge of technology is how we’re going to continue to get these deals done.”

To maintain a cohesive team, which is harried during the week, the pros meet in the office on Saturdays for about six hours.

“For us to really be on the same page to work as a well-oiled machine, Saturdays are necessary,” Swerdloff said. “We’ll talk about new business, different ways we’re going to improve.”

At Carmel Partners and Times Square Construction & Development’s 325 Lexington Avenue between East 38th and East 39th Streets, Famularo and Swerdloff signed the Japanese izakaya restaurant Wokuni for its New York debut, achieving over the $150-per-square-foot asking price. (The pair represented both sides in the deal.)

How did they land Wokuni?

Swerdloff started at Eastern in July 2015, after graduating with a finance degree from Syracuse University. Like other newbie retail agents at Eastern, he worked in the brokerage’s bullpen. His first deal—and the only one he has done in Brooklyn—was at 78 Fifth Avenue in Park Slope, a couple of blocks away from the Barclays Center.

Following a cold call to the tenant, Swerdloff leased a space he had canvassed to Ramen Thukpa, for its second location (the other is in the West Village). To seal the deal, he employed the help Geoghegan because “I saw that he was always hustling and bustling and was never still, always doing deals and always on showings. So I just went up to him essentially and was like, ‘You want to work on this lead with me?’ And he was like, ‘Yeah, this seems like a real guy,’ which is key.”

In his free time, Swerdloff can be found at a new eatery (the whole Eastern team is “trolling Eater all the time—and any time something new opens, it’s like, ‘Who on our team can get their first?’ ” Swerdloff said), or playing basketball in a league.

“I almost have like a short attention span with restaurants,” he said. “I like trying the newest things. You know, I don’t go to one restaurant once a week. I’m sure, when you see the day in the life of a broker, it’s like, ‘Every morning I go to this place on the corner of this, and every night I eat here.’ I’m not like that at all. Like I’m talking and I’m thinking about where I can eat tonight, I’m like [thinking], what place haven’t I tried that is close to my apartment that opened in the last six months?”

Because of all his inside knowledge, friends know they can hit him up for a good restaurant recommendation.

“The amount of texts I get from a friend with like three requirements: ‘second date, kind of like her, loud but not too loud so we can have some conversations, West Village—where do I go?’ ”