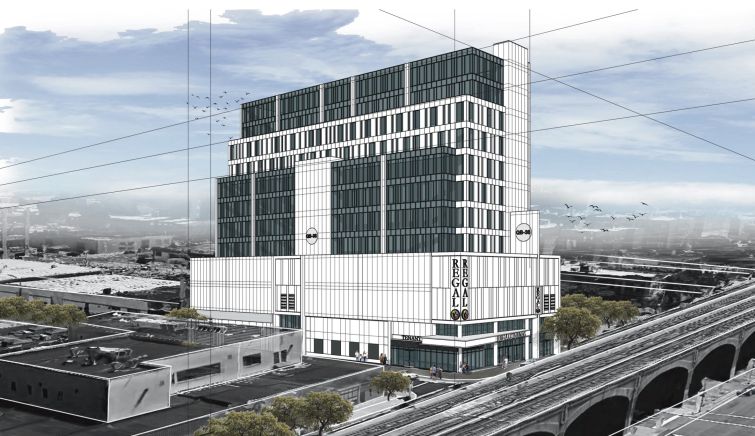 A rendering of the mixed-use building at 38-01 Queens Boulevard, which will be anchored by a Regal Cinemas location. Rendering: Curbcut Urban Partners

Regal Entertainment Group has signed a 38,000-square-foot deal for a new theater to anchor the planned 145,000-square-foot medical and community facility building at 38-01 Queens Boulevard in Sunnyside, Queens, Commercial Observer has learned.

The new Regal Cinemas location will occupy part of the ground floor and the entire second floor of the 12-story, SBLM Architects-designed development called “The Sunnyside,” at the corner of 38th Street and Queens Boulevard.

The deal is for 20 years, according to information provided by Aaron Malinsky, president and chief executive officer of Curbcut Urban Partners, which is developing the project with Platinum Realty and RW Real Estate Group. Malinsky declined to provide the asking rent in the deal. CO previously reported asking rents for retail space at the project were in the $75-per-square-foot range.

It was not immediately clear how many screens and seats the movie theater will have, but the theater will feature luxury recliner seats. The new cinema fills a gaping hole in the neighborhood and surrounding areas left by the closure of the Sunnyside Center Cinema (formerly at 42-25 Queens Boulevard) in January 2015.

“We’re making a long-term commitment to the neighborhood with the completion of The Sunnyside, which will not only offer community space to benefit the whole neighborhood, but a much-desired new theater experience with Regal Cinemas,” Malinsky said in prepared remarks.

Harris Reichenbaum and Peter Ripka of Ripco Real Estate represented both the landlord and the tenant.

“On the heels of all the residential and office growth [in nearby Long Island City]; entertainment, restaurants and service oriented retailers are sure to follow—hence us offering the site to Regal and their desire to open a brand new facility,” Ripka said in an email. “It will be a great addition to the community.”

The developers plan to lease the upper floors of the building “first come, first serve” to medical and community facilities, Malinsky said. There is also a 1,500-square-foot retail space on the ground floor. The glass and steel property’s amenities will include a rooftop space for tenants, outdoor terraces, bicycle storage, and a separate lobby for tenants. In addition, the structure will have more than 100 parking spaces in an underground garage, as well as an electric vehicle charging station.

Construction on The Sunnyside commenced in the summer, and the property is expected to be completed in the Spring of 2019.

The developers have brought on Paul Wexler and Josef Yadgarov of the Wexler Healthcare Properties team at Corcoran Group to market and lease medical and community facility space.

“This property is an absolute game changer for Sunnyside,” Wexler said in a prepared statement. “The development team had the incredible foresight to create a building that will help shape a neighborhood that is still little known to many in New York. The Sunnyside will offer convenience to new retail and medical offices for local residents, and is steps away from the 7 train with easy access into Manhattan.”