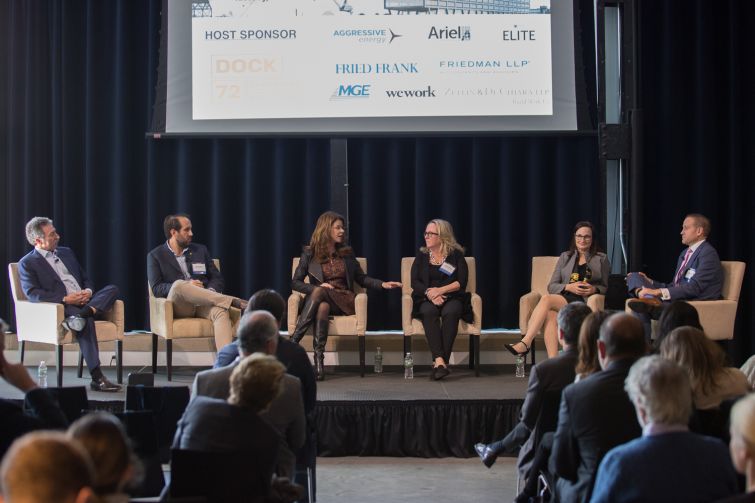 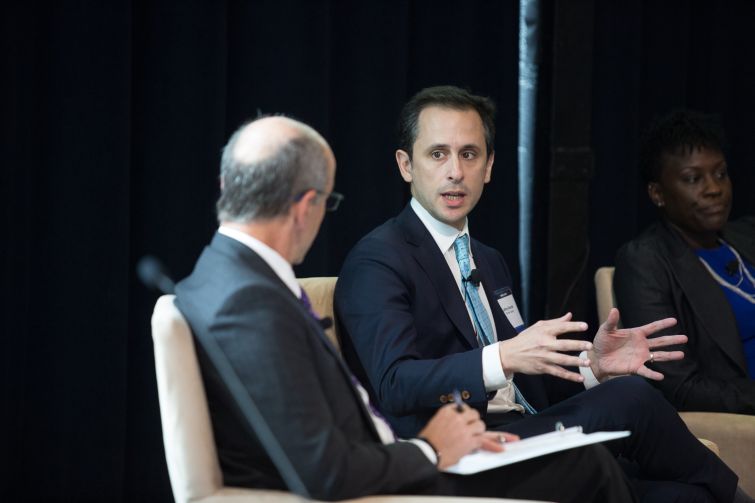 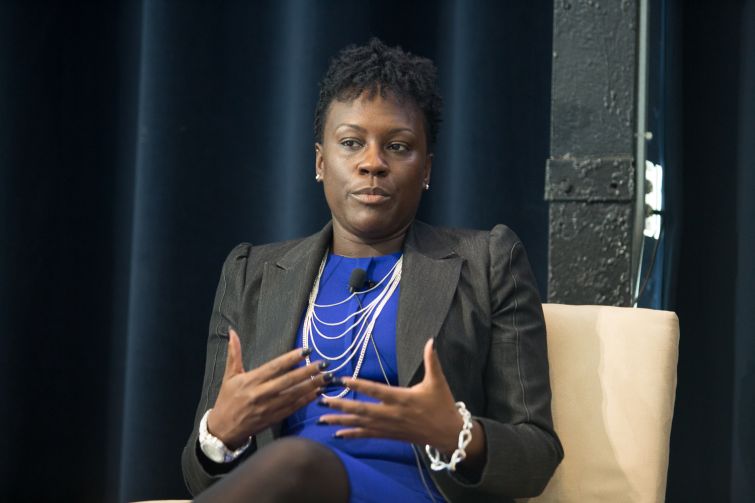 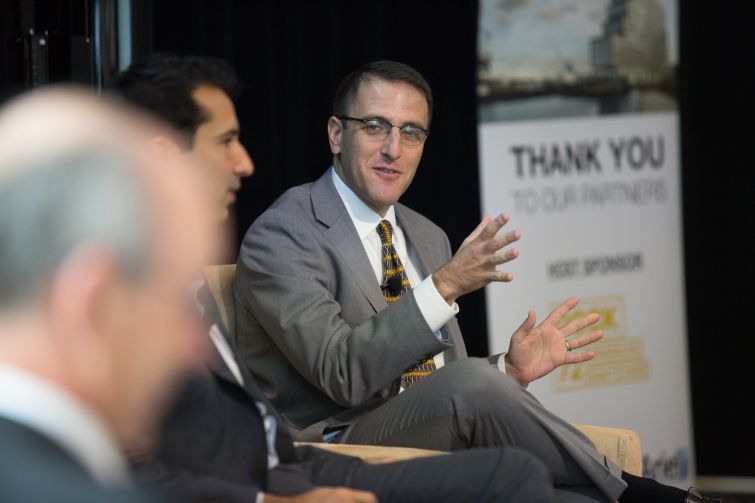 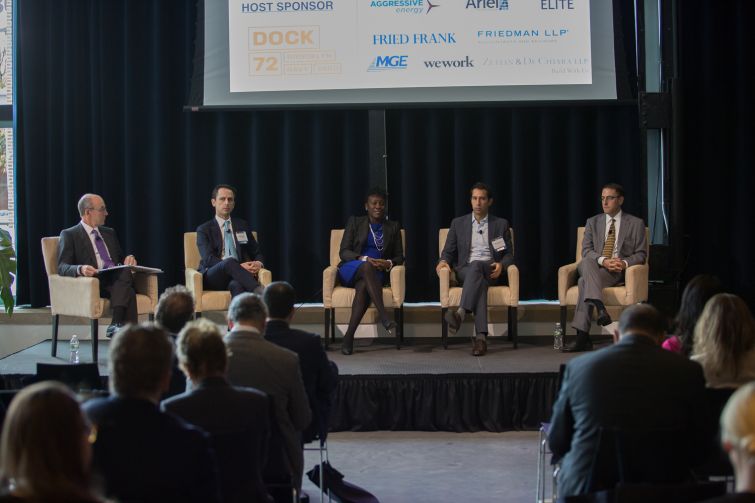 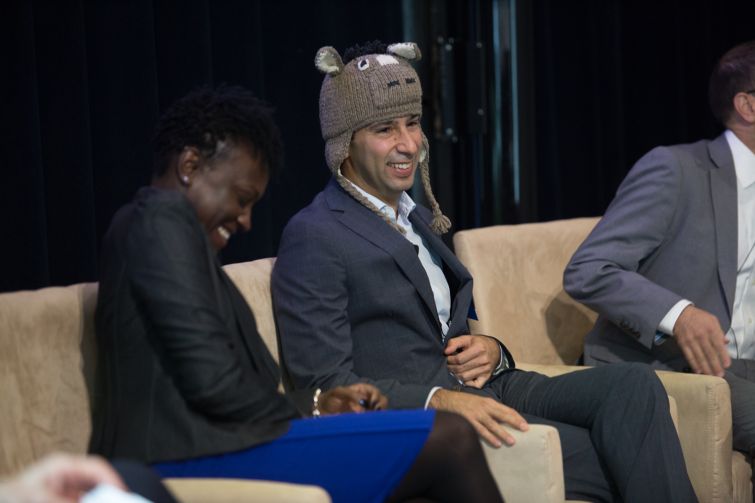 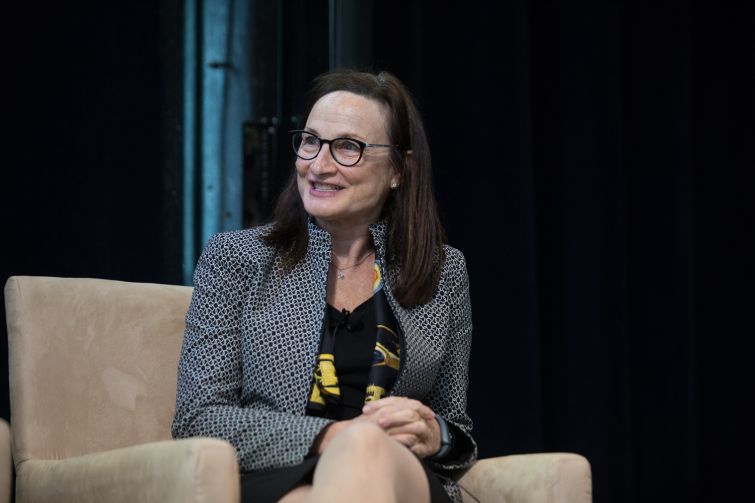 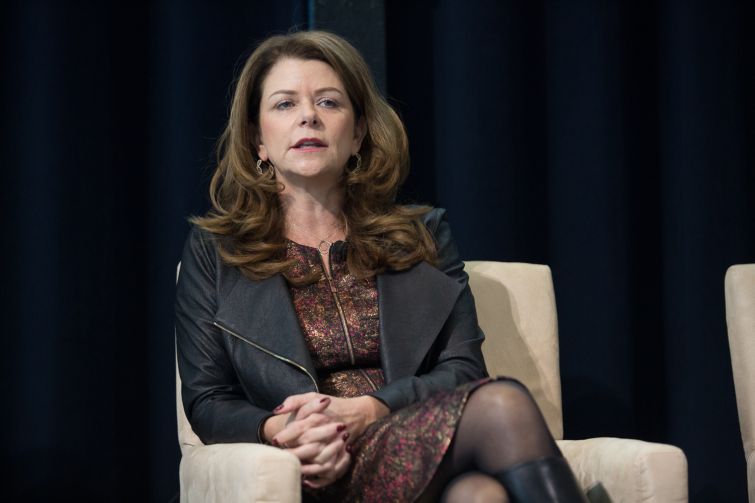 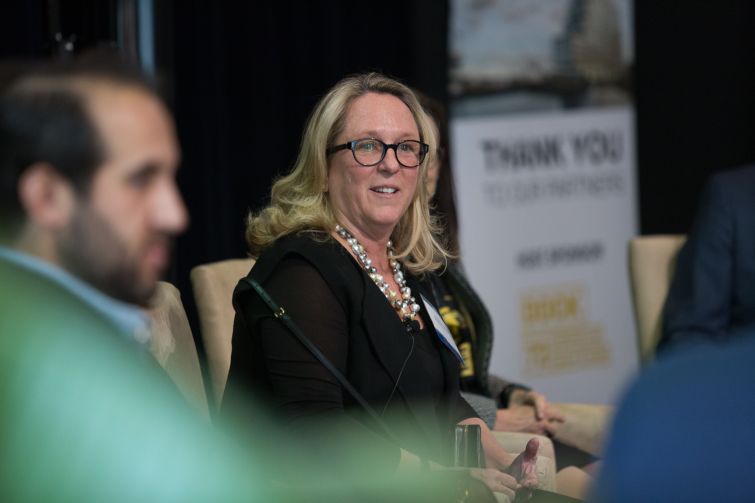 Deirdre Quinn discusses why she moved her company, Lafayette 148, from Soho to the Navy Yard. Photo: Aaron Adler/For Commercial Observer 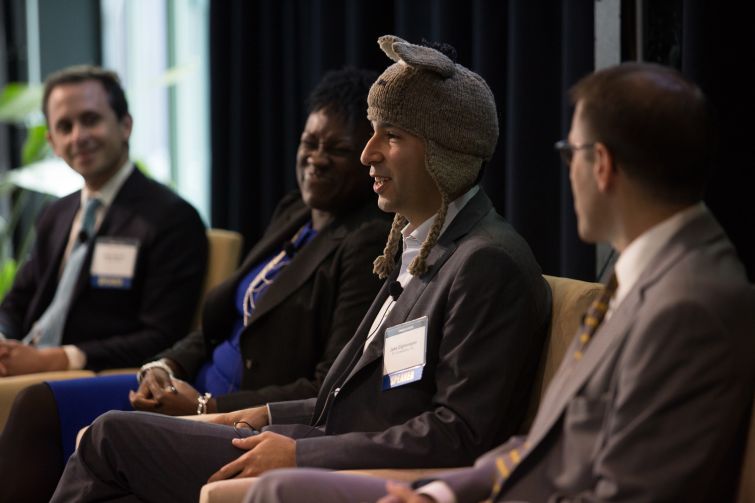 The Brooklyn Navy Yard was once a thriving industrial hub, and it may finally be again, thanks to the borough’s self-styled “innovation economy” that meshes tech and light manufacturing. Brooklyn boosterism and its gritty past were on display yesterday at Commercial Observer’s Brooklyn Queens Event, which took place in the newly constructed Building 128 at the Navy Yard.

The former shipbuilding hub has experienced a renaissance over the last five years, after four decades of inactivity. Steiner Studios runs a sprawling TV and movie production complex on the eastern side of the yard. Boston Properties and Rudin Management are developing a 675,000-square-foot office building, Dock 72, on a former dry dock on the East River that will be anchored by 222,000 square feet of WeWork offices. And the million-square-foot former warehouse at Building 77 has been renovated with a food hall and new elevators and is set to open to office tenants in the next few weeks.

During the event’s Brooklyn panel, Deirdre Quinn, founder of fashion brand Lafayette 148, explained that she was moving her operation to Building 77 because the office rent was a third of what her company paid in its longtime Soho home on Lafayette Street. The rest of the speakers included Downtown Brooklyn Partnership President Regina Myer, Rudin Management Senior Vice President Michael Rudin, Ariel Property Advisors Senior Director Sean Kelly, and moderator Jonathan Mechanic, who chairs the real estate practice at Fried Frank.

But the Navy Yard isn’t the only part of the borough seeing commercial growth. MaryAnne Gilmartin, president of Forest City New York, recalled how her company constructed the first ground-up office building in Brooklyn after 9/11 for insurance company Blue Cross Blue Shield. The developer built the 23-story project, now known as 15 MetroTech Center, in 2003 without a bank loan or a signed lease, Gilmartin said. Now Forest City, which has built seven million square feet of office space in Downtown Brooklyn since the 1980s, is setting its sights on developing a million-square-foot office tower on a large parcel near Atlantic Yards. Gilmartin hopes to develop “an iconic flagship building” at the corner of Atlantic and Flatbush Avenue with a large retail plinth.

Myer, who once served as the head of Brooklyn Bridge Park and the Brooklyn City Planning office, celebrated the fact that new office development was finally arriving in Downtown Brooklyn. Those commercial projects are coming up among a flood of new residential towers, which dominated the neighborhood after a 2004 rezoning that had aimed to encourage office construction. One of those developments is the Wheeler, Tishman Speyer’s 10-story office building being constructed over Macy’s four-story, 1870 department store and its eight-story Art Deco office tower. Another is JEMB and Forest City’s 500,000-square-foot office tower, One Willoughby Square. It is set to rise on a site along Albee Square that had been slated for residential development until the city intervened with subsidies.

With all that new density comes a need for public investment in Downtown Brooklyn, said Myer. “We need new park and streetscape space,” she said. “We need big ideas; we need to connect Downtown Brooklyn to the waterfront,” she added, explaining that a proposed series of landscaped public spaces called “The Brooklyn Strand,” could accomplish that link and add more green space to Dumbo and downtown.

TF Cornerstone and Tishman are essentially creating a new construction office market in Long Island City, which is mostly populated by aging industrial buildings and new high-rise residential towers. Elghanayan, outfitted in a knit donkey cap for Halloween, explained that his firm is developing 100,000 square feet of manufacturing space, 400,000 square feet of office space, and 19,000 square feet of retail as part of a massive mixed use project next to Hunters Point South along the East River. Similarly, Tishman Speyer is building two 26-story office towers, known as the JACX, to accompany its massive three-building rental project on Jackson Avenue.

All that development just highlights the fact that we need to preserve Long Island City’s mix of industrial, residential and commercial uses, argued RXR’s Seth Pinsky. “We shouldn’t let anyone use, especially residential, overtake that mix,” he said. “[Long Island City] should be the hub of creative businesses across the spectrum of industries, whether it’s media companies or bioscience companies.”

Mandel agreed, asking, “Are we keeping an eye towards affordable office stock?” He added, “I think part of what has to happen is the city needs to make clear that not all parts of the city are going to be developed for residential or things that are going to compete for those uses.”

Pinsky, who did stints as head of the city’s Economic Development Corporation and its Special Initiative for Rebuilding and Resiliency under Mayor Michael Bloomberg, emphasized that the city needs to invest in its infrastructure and zone for more residential development if it wants to plan for the future.

“We need more housing period, which means that we need more density at our transit nodes,” he said. “Nobody wants to see the character of their neighborhood change, and as a result, too many rezonings are opposed by elected officials. But the net impact of that on our city is that the cost of living for everyone is going up. You can’t be pro affordability and anti-density.”