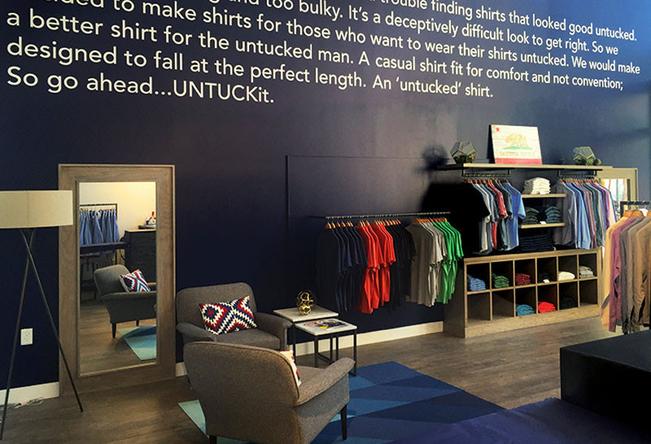 Inside the Soho store of Untuckit. While each store is tailored to its location, they all have a wall outlining the Untuckit story. Photo: Untuckit

Menswear label Untuckit, the company sells high-end shirts that are designed to be worn untucked, is heading to Brookfield Place in late November, Commercial Observer has learned. The location is one of three opening next month. The others are at 103 Fifth Avenue and 488 Madison Avenue.

The company has signed a 10-year lease for 2,370 square feet on the second floor of Brookfield Place’s retail courtyard, between Cos Bar and the men’s Club Monaco, according to a spokesman for Brookfield Property Partners, the owner of Brookfield Place. It will include a unique mosaic comprised of subway tiles on one of the walls as well as a lounge area, an Untuckit spokeswoman said. Brookfield declined to provide the asking rent at the building, which has an address of 230 Vesey Street.

“As we have been rapidly expanding our retail footprint with 20 new locations nationwide this year, we are particularly excited about the three new stores opening in New York City next month,” Chris Riccobono, the founder and executive chairman of Untuckit, said in prepared remarks. “Since we are headquartered in New York, it made sense to have a strong presence here. Brookfield Place is the height of luxury retail, and its Lower Manhattan location offers accessibility for customers from around the city and New Jersey.”

Cushman & Wakefield’s Michael O’Neill, Taylor Reynolds and Jason Greenstone represented Untuckit in the deal and Michael Goldban and Mark Kostic brokered the deal for Brookfield in-house. A spokesman for C&W didn’t respond with a comment.

“This emerging brand perfectly complements our men’s retail collection and the overall fashion-forward presence at Brookfield,” Goldban said in a statement.