Under Construction: How Tishman Speyer Is Building an Office Tower Over Macy’s in BK 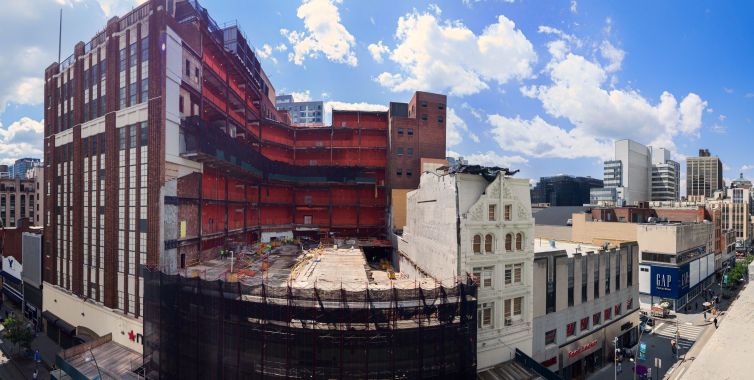 An opening in the 1920s existing Macy's building which will be connected to the new 10-story office structure. Together the old and new will have 620,000 square feet of office space. Photo: Tishman Speyer 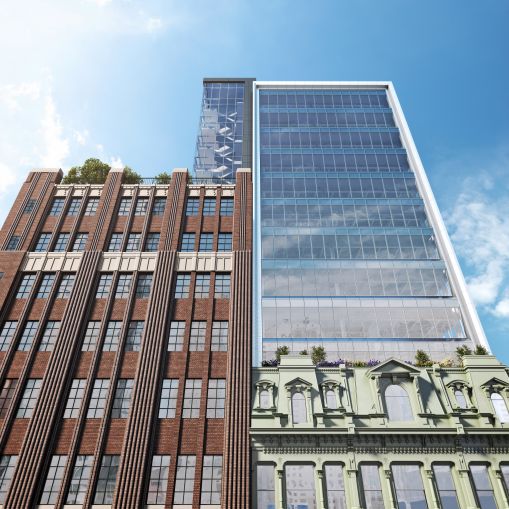 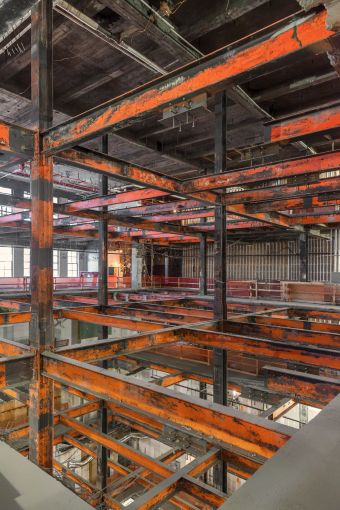 The demolished interior of the existing Art Deco building, which reveals the structure will have ample open space. Photo: Tishman Speyer 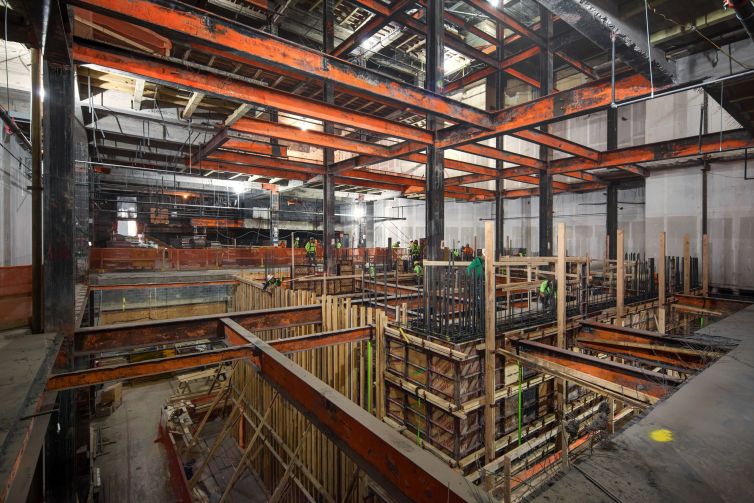 The new core coming through the center of the space. Photo: Tishman Speyer 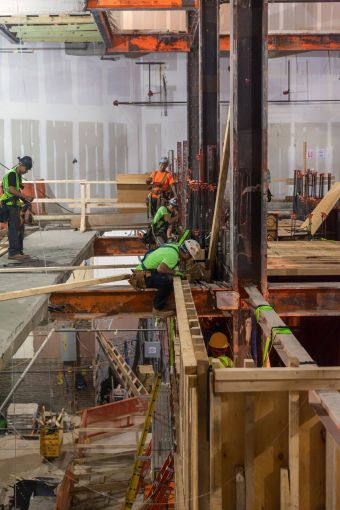 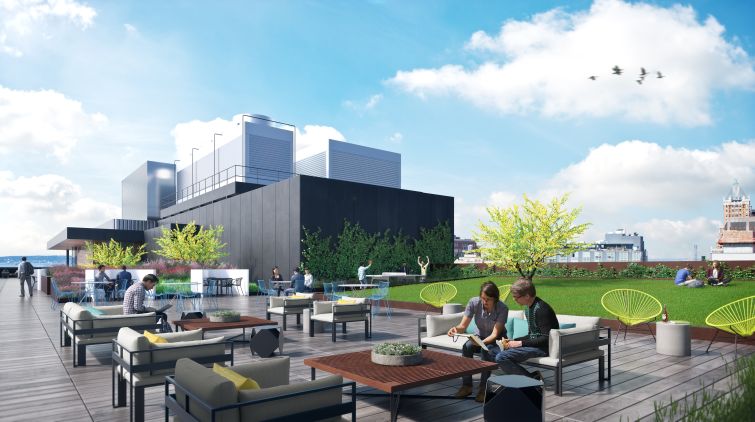 The roof of the Wheeler will feature a lawn and seating for events and tenants to enjoy. Rendering: Tishman Speyer
Previous Next

Tishman Speyer and partner HNA Group are trying to blur the lines between Art Deco architecture and contemporary glass with their new office project in Downtown Brooklyn called The Wheeler.

The project involves adding a new 10-story, office building above the existing four-story French Mansard building at 422 Fulton Street, constructed by Brooklyn developer by Andrew Wheeler in 1870 (where it gets its name). The new structure will be tied to the two adjacent 10-story Art Deco buildings. Macy’s—which owned the three buildings in their entirety—will continue to occupy the first four floors of the project; the upper floors will be a mixture of old and new and comprise 620,000 square feet. (The building will also have an entrance at 181 Livingston Street).

“We have been trying to create [a seamless] footprint so you won’t know that you are on an amalgamation of different floors,” Chris Shehadeh, a Tishman Speyer senior managing director who oversees New York, told Commercial Observer. “We are putting in a new core that will thread the three different buildings, and then we will go back and take out the old cores. What we will be left with is a new core and wide-open floor plates where you don’t have a reminisce of each of the individual buildings.”

To preserve the historical pedigree, JRM Construction has removed cast iron from the facade, which will be repaired and replaced. Moreover, construction workers will also renovate the masonry to the main Macy’s brick buildings.

A gut renovation is currently underway with demolition teams clearing the interiors of the existing buildings. Workers will then join those properties to the new building.

The first four office floors will have 90,000-square-foot floor plates with loft-like 16-foot high ceilings. The remaining six floors will range in size from 34,000 square feet to 60,000 square feet. The project is expected to be completed in mid-2019.

Tishman Speyer declined to disclose the construction costs to CO, but the developer took a $194 million construction loan from Bank of the Ozarks in January. And it paid $170 million to Macy’s for the top six floors of its properties. Macy’s still owns the bottom four floors. (Tishman Speyer also will give Macy’s another $100 million to renovate the retail space.)

The developer is also hoping to blend East Coast and West Coast vibes.

The developer brought in Los Angeles-based architect Joey Shimoda of the namesake Shimoda Design Group, which Tishman Speyer worked with for an office complex at Playa Vista in Los Angeles. This will be Shimoda’s first project in New York City. (Perkins Eastman is the architect of record.)

Shimoda’s design puts an emphasis on modern, open-plan spaces with loads of glass so light can flood the floors. And each floor will be open plan, which will attract a mix of companies to the office tower. He also crafted 11 terraces via setbacks and a roof with a lawn and seating. In total, the property will feature an acre of outdoor space.

The rooftop space will be open to all tenants for events as well as common space to relax and enjoy the views 276 feet off the ground, such as the Statue of Liberty, the Manhattan skyline and the Brooklyn Bridge.

“We are trying to stay first and foremost true to the Brooklyn neighborhood feel and vibe while introducing modern and contemporary office amenities and design,” Shehadeh said. “I think the goal is to marry those two, and Joey is the perfect architect to do that.”