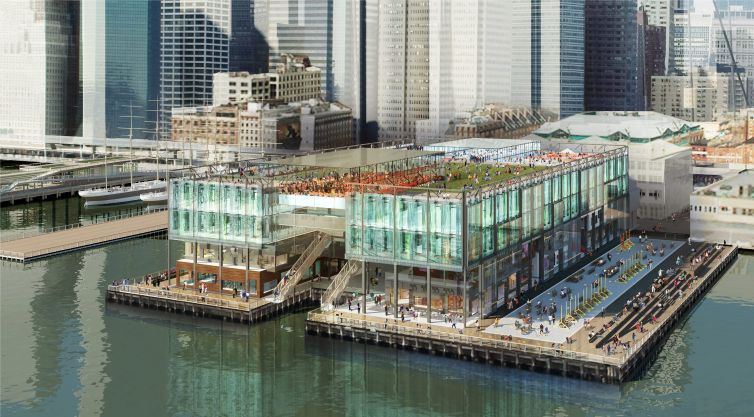 “The Worldwide Leader in Sports” is coming to South Street Seaport.

The cable sports broadcaster inked the lease through its studio production partner, NEP Studios, and will begin producing multiple television and radio shows from the location starting in spring 2018. Asking rent and length of lease were not disclosed.

According to The New York Post, which first reported news of the deal, ESPN will operate on the third floor of the four-story building, with its space offering views of the Brooklyn and Manhattan skylines. The broadcaster will also be able to shoot on Pier 17’s rooftop, which is slated to open next summer.

In a statement announcing the deal, Connor Schell, ESPN’s executive vice president of content, said the new production facility’s “flexible spaces, both indoor and outdoor, allow us to take advantage of all that New York City has to offer.”

While ESPN has offices in Manhattan, the company broadcasts mostly from its Bristol, Conn., headquarters. The new South Street Seaport location will feature three separate studios—two dedicated to television production, and another for radio, per the Post.

David Weinreb, Howard Hughes’ chief executive officer, said in prepared remarks that ESPN “will bring a new dimension of entertainment to the neighborhood with live daily telecasts from Pier 17 in what I believe will become one of the most iconic studio spaces in the country.”

ESPN will be the first tenant to occupy Pier 17, a development featuring 150,000 square feet of rentable office space and restaurant concepts by Jean-Georges Vongerichten and David Chang, which are due to open next summer.

While brokers in the transaction were not immediately clear, the Post reported that CBRE’s Mary Ann Tighe is marketing Pier 17’s office space on behalf of Howard Hughes.

“There’s nothing else like [Pier 17] in Manhattan, so I’m not surprised that ESPN decided to make it their New York studio center,” Tighe told the publication.

Representatives for Howard Hughes did not immediately return a request for further comment.