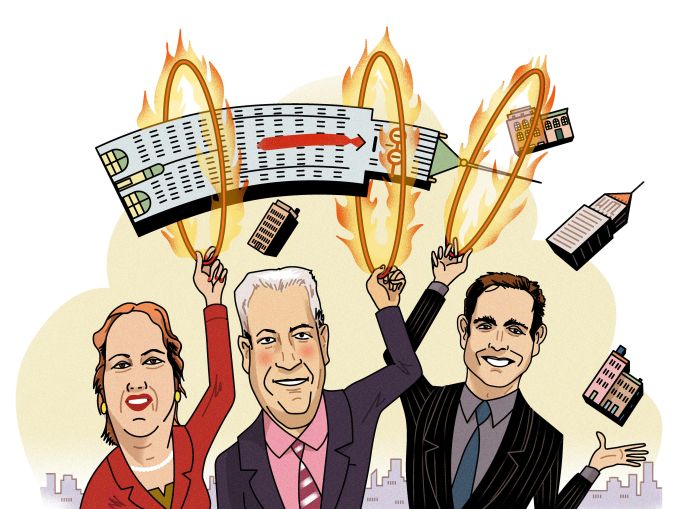 Earlier this year, the New York City Council passed legislation to reform the city’s Board of Standards and Appeals—the latest political flash point over a body that has, since 1916, held a major influence over the way the city’s modern zoning code is implemented.

In any instance where a landlord seeks a property-specific zoning variance as an exception to New York City’s land-use rulebook, they make their case to the mayor-appointed, five-member BSA—giving it life or death supremacy over development dreams.

Property owners are allowed to appeal to the body when a “unique condition” that doesn’t comply with standard zoning regulations is getting in the way of a “reasonable economic return” on the property. In appealing to the BSA, one must to explain why they deserve “relief” from a “hardship” created by the zoning code, per the body’s guidelines.

It’s no surprise, then, that opinions about the BSA are split. On the one hand, it is seen as a vital outlet for owners of all property types—from multifamily to retail to community uses like schools and medical facilities—when the restrictive, one-size-fits-all zoning code is hindering their property’s potential.

On the other, politicians and preservationists have argued that the body is a way for the real estate industry to circumvent regulations and one that has the unintended effect of rezoning the city’s neighborhoods one property at a time.

“The BSA is the most powerful city agency that no one has ever heard of,” said New York City Councilman Ben Kallos, who represents District 5 (the east side of Manhattan from Midtown up to East Harlem). “It literally has the power to change how neighborhoods are planned without going through the regular city planning process.”

Kallos, who sponsored five of the nine bills in the BSA legislative reform package that the City Council passed in May, said his interest in the body goes back more than a decade to his time as a member of Manhattan’s Community Board 8 and concerns that arose as he witnessed his Upper East Side neighborhood “turn from a residential neighborhood into a commercial and hospital district.”

“I watched a parade of applicants come in and build buildings that could never be built under the current neighborhood plan,” he recalled.

The bills feature an array of changes to the BSA’s procedural guidelines. Five of the nine laws have already come into effect as of September, including measures requiring the BSA to respond to any evidence or arguments submitted to an application by the relevant community and borough boards, and one mandating the appointment of a Department of City Planning “coordinator” tasked with submitting testimony in defense of existing zoning resolutions (City Planning appointed administrator Nicole Vargas to the role in August).

The remaining four measures are scheduled to go in effect over the course of the next several months, through May 2018. Those include application reforms that Kallos noted are particularly important, and which institute minimum requirements on financial disclosures and analyses showing why BSA applicants qualify for an exemption to the city’s zoning code. The application reforms also mandate that testimonies before the BSA be made under oath, with applicants at risk of civil penalties for providing any knowingly false statements.

“It creates transparency if you can see whether someone overpaid for their site, or if they’re underestimating its value—knowing that is the first piece [in evaluating a potential zoning variance],” Kallos said of the reforms. “There are a lot of developers who will build a site [as of right], and generally that building will fit into the neighborhood. But we’re in an age where some developers think the rules don’t apply to them, and they want to build something different to what’s in the rest of the neighborhood.”

Transparency reforms passed by the City Council also seek to shine further light on the BSA’s operations, and particularly its rate of approval on applications—a hot topic when debating the board and its functions. Community groups like the Municipal Art Society of New York (MAS) have for years cited the prolifically high-approval rate on applications heard by the BSA; the MAS’ most recent comprehensive study, in 2004, pegged the approval rate at 93 percent over a two-year period between 2001 and 2002.

“We found that a lot of those approvals were clustered in the same area and that the BSA, by approving these applications, was effectively rezoning neighborhoods,” Thomas Devaney, the MAS’ senior director of land use and planning, told CO. “And that wasn’t their job—that’s City Planning’s job,” referring to the department that regulates zoning and land use on a macro, citywide scale.

The City Council’s legislative package not only requires the BSA to biannually disclose the number of applications filed, approved and denied, but also the number of pre-application meetings that it hears—the latter being informal meetings held between the board and applicants, which are meant to vet potential applications and gauge their validity as a case.

As part of the legislation that has already taken effect, the BSA last month disclosed a report on its applications and pre-applications in its most recent fiscal year, comprising the 12 months that ended June 30, 2017. That data shows that of the 341 cases on which the BSA delivered a decision in that span, it granted a zoning variance on 304 occasions—an approval rate of just over 89 percent. Four applications were denied with another four dismissed and 29 applications withdrawn.

Devaney said he believes the City Council’s reforms “improve and increase transparency” at the BSA to the level of other city agencies; one bill, which takes effect next May, requires the body to develop an interactive, online map documenting all variances and special permit applications delivered by the board since 1998.

“I agree that [the reforms] will strengthen the existing requirements, and through improved transparency it will hopefully improve the review process, make it more vigorous and hold people to the fire on both ends,” Devaney said.

But to those who work with the BSA on a consistent basis and rely on the body for the variances and exemptions that make their work feasible, the reforms are more a case of misunderstanding the BSA, the way that it works and its purpose as a city entity. (Representatives for the BSA and the Department of City Planning did not comment for this article.)

“What they’re missing is the number of applications that don’t get submitted, and that are discouraged from submitting because of the pre-application meeting where there’s a dialogue or realization that the findings cannot be met,” said Mitch Korbey, a partner at Herrick Feinstein and chair of the law firm’s land use and zoning group.

Korbey—who prior to his role at Herrick Feinstein worked as an urban planner and served as one of the BSA’s five commissioners, between 1998 and 2003—noted that the BSA’s high rate of approval on applications doesn’t factor the cases that “never see the light of day” after consultation with both the board and the applicants’ own land-use attorneys.

“It’s inappropriate to file a case that doesn’t have a strong chance of success or approval,” he said. “If you have a sense that your application is not sufficiently strong, you won’t submit it. It’s not good for the client—and it’s not good for the city—to move forward.”

Korbey described the legislation package as out of touch with the realities of the work done by the BSA—as well as an added burden on a “very serious, quasi-judicial body” that features a limited team of around a dozen staffers tasked with vetting individual zoning changes across a sprawling, 300-square-mile city of more than 8.5 million people.

“I completely disagree with the notion raised by some that there’s a sense of too many approvals,” he said. “At the end of the day, this is a body of experts, each of them appointed by the mayor, [and most] of them need to have at least 10 years of experience [in their given field].” (Of the BSA’s five commissioners, three are required to be experienced in a given field related to zoning and land use: one architect, one planner and one engineer. Margery Perlmutter, who chairs the BSA, is an architect and a partner at the law firm Bryan Cave.)

While acknowledging that “maybe there is a need for [additional] dialogue and communication” between the BSA and various stakeholders, Korbey described the City Council’s reforms as “belts and suspenders”—superfluous and redundant to the way the body already functions.

“Every single BSA resolution is [already] online; every single one is public,” he said, referring to the transparency measures, in particular. “This is not an agency that requires or screams out for fixing. It’s a unique and special place, where you have people who are experts in their field, who are serving the city when they could be doing something else. They’re very thoughtful about what they do.”

Developer David Schwartz, a principal at Slate Property Group, echoed Korbey’s argument that the BSA is a body that is selective in the cases it decides to hear—something that Schwartz said he and his firm have experienced firsthand. “The reason they have a high [approval] rate is that they will tell you, up front, if your case doesn’t have much merit,” he noted.

Schwartz said that, contrary to the beliefs of opponents, the BSA is “not used to skirt the zoning laws” but rather to allow developers the opportunity to build to the best use of a given parcel. He cited one Queens lot owned by Slate where, because of a Long Island Railroad line that ran adjacent to the property, the developer was unable to meet as-of-right zoning requirements on parking without the project becoming “very cost prohibitive.”

After receiving the variance sought at the property, “we were able to do a 100 percent affordable, low-income [housing] project, which we would not have been able to do any other way,” Schwartz said.

“In my opinion, it’s overkill—all we’re doing is adding additional cost and time,” he said of the new legislative regulations. “You don’t go through this process—the city doesn’t want to waste everybody’s time and money—with things that aren’t going to get done. There are so many unique properties [in the city], and that’s the whole point [of the BSA]: You can’t write zoning for the exception. You’re talking about unique circumstances.”

But for advocates like Kallos, who wish to see greater oversight in the way New York City is being built and rebuilt, the legislative package is just the start. Once the reforms are rolled out in their entirety, the City Council plans to “look at all the information” it receives on the BSA and its processes and deliberate “whether or not we’re asking City Planning to take a greater role in protecting our zoning code,” Kallos said. “We’ve laid the groundwork on all of that.”