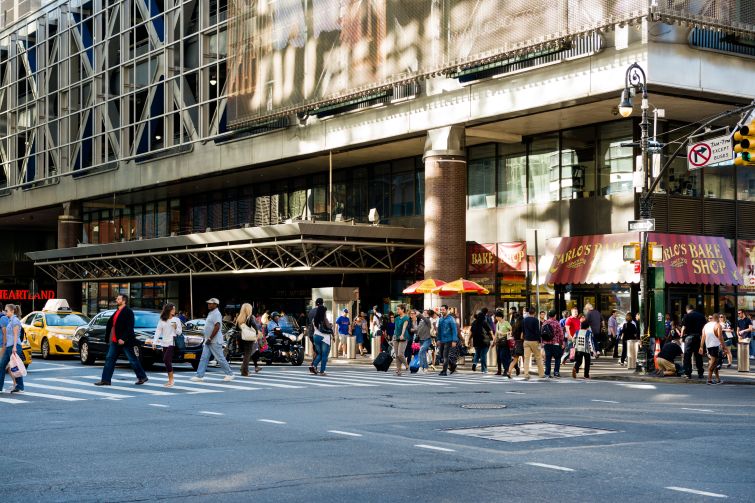 The Port Authority of New York & New Jersey might rebuild its much-reviled bus terminal on West 42nd Street rather than build a new one elsewhere, officials announced during a board meeting today.

If the bistate agency chooses to keep the bus station in its current spot in Hell’s Kitchen, it would add two floors to the existing four-story structure between West 40th and 42nd Streets and Eighth and Ninth Avenues. The authority could do the construction while maintaining “integral bus operations” and pedestrian access through the huge site, said Steven Plate, the chief of the Port Authority’s capital projects.

He explained that the build-in-place option was structurally viable as long as construction was conducted in phases—meaning that the Port Authority would be able to safely run buses and add extra floors to the building. Similar redevelopment projects have been conducted at the World Trade Center, the Hospital for Special Surgery on the Upper East Side and previously at the bus terminal, Plate said.

Although the terminal was first built in 1950, it was expanded first in 1963 and then again in 1979. The latter renovation added a north wing and a 70-store shopping mall, boosting the station’s size by 50 percent and expanding its footprint to two full blocks, as Commercial Observer noted in a 2015 feature on the terminal.

However, the agency is still considering several development options for the terminal, including seizing property elsewhere to build a new one, or moving it to another state-owned property, like the Javits Center. Former Port Authority chairman John Degnan said last year that he didn’t want to use eminent domain to expand the facility. However, spokespeople for the agency told CO that “all options are being considered” as part of the upcoming environmental review process.

A quarter of a million people and 8,000 buses pass through the station every day, and the authority expects that 100,000 more people will use it by 2040. The agency has already earmarked $3.5 billion in its budget for redevelopment of the facility, where construction is not expected to begin until a two-year-long environmental review is complete.

This week, the agency issued a request for proposals for a consultant to conduct the environmental review. But many other details, like the expected completion date for the project, remain vague.

The renewed focus on keeping the bus terminal where it is comes after more than a year of controversy among West Side neighbors and elected officials. In October 2015, the agency launched a design competition to solicit plans for a new facility. But some of the proposals involved seizing property through eminent domain, which was a non-starter for local politicians. The eminent domain suggestion also angered nearby residents, who feared that the authority would displace homes and businesses.

Now the Port Authority—which has a new executive director, Rick Cotton, as well as a handful of new board members—claims it’s going to focus on a “robust public outreach program,” Plate said during the meeting. That isn’t surprising, after five elected officials who represent the neighborhood—including Rep. Jerrold Nadler, Manhattan Borough President Gale Brewer and Councilman Corey Johnson—penned a letter to the agency’s chairman last November slamming the design competition and the planning process up to that point.

“This type of large-scale project must be planned with an objective eye towards the communities it serves, both the surrounding residents and the passengers that are coming to New York City,” the politicians wrote.