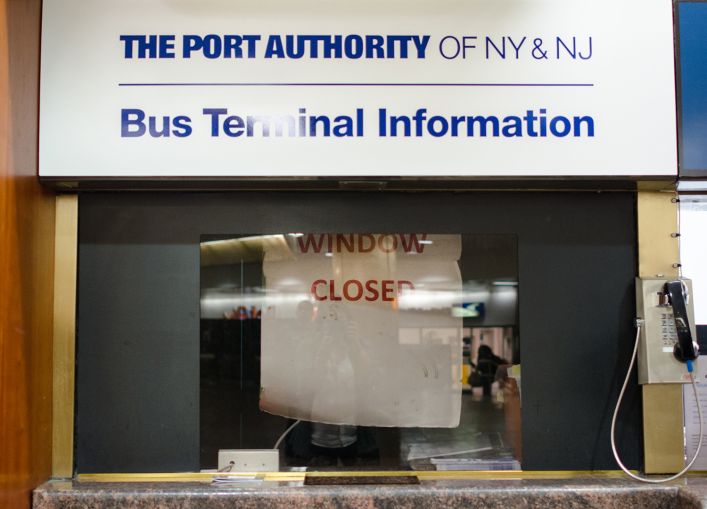 The 65-year-old Port Authority Bus Terminal is set to be replaced by a new building (Photo: Molly Stromoski for Commercial Observer). tcullen2015

Before the 65-year-old behemoth Port Authority terminal comes down and a new design is selected, it’s worth taking a look at some of the history behind the sprawling two-avenue-long bus depot.

Roughly a quarter of a million travelers pass through the hulking building every day. Those people come on national bus lines such as Greyhound and Peter Pan, as well as NJ Transit. Over the years, there have been plans to build a skyscraper above it and plans to tear it down—the butt of many late-night television jokes. (Speaking of TV, the depot pays homage to America’s most famous bus driver, Ralph Kramden, with a statue out front.)

Mayor Fiorello LaGuardia was the first person to explore options for the over crowding of mass transit in New York City in 1939, according to the Port Authority of New York & New Jersey’s history of the terminal. But the project didn’t officially kick off until 1949, opening to the public on Dec. 15, 1950. The Port Authority put the cost 65 years ago at $24 million. Originally, the bus station ran from West 40th to West 41st Streets, and Eighth to Ninth Avenues.

According to Kenneth T. Jackson’s The Encyclopedia of New York City, the terminal was expanded in 1963 at a cost of $30 million.

Capacity was reaching its peak three years later, however, and 69 million people went through the depot in 1966, according to the Port Authority, so the terminal was increased by half its size during the late 1970s and early 1980s (for $226 million), giving it the full, two-block footprint you see today. The upgrade gave the bus terminal a 70-store shopping mall, as well as 52 new bus platforms, according to the Port Authority.

That new wing, running from West 41st to West 42nd Streets, was also the source of a long debate over expansion. Vornado Realty Trust spent roughly a decade working out a deal to build a 40-story tower on top of the north wing of the terminal.

Plans ran out of gas in 2011, however, when the developer lost its partner, SOHO China, to invest $600 million, as The New York Times reported. Vornado lost its right to develop over the building.

Upgrades have been in talks for some time, and comedian John Oliver dedicated a nearly three-minute segment to the terminal’s poor condition in October 2014 on HBO’s Last Week Tonight. Mr. Oliver named the depot “the single worst place on planet Earth,” for its dirty and decrepit position.