Under Construction: Unfreezing the Long-Vacant Ruppert Ice House in the Bronx 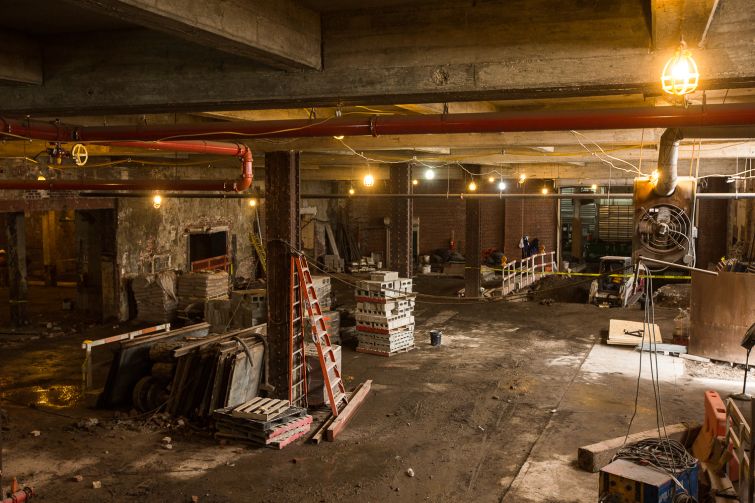 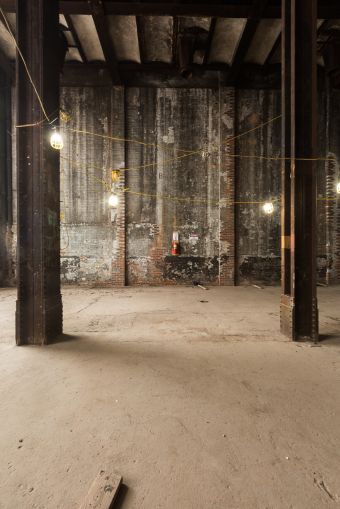 There are columns made of iron ore at 20 Bruckner. Photo: Emily Assiran/For Commercial Observer 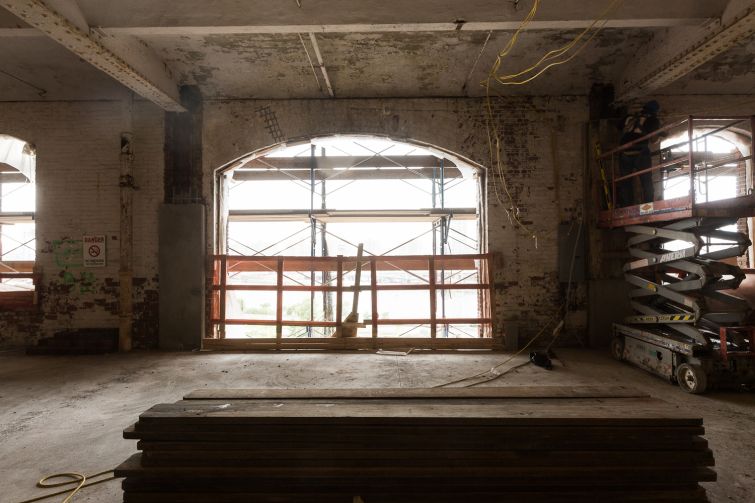 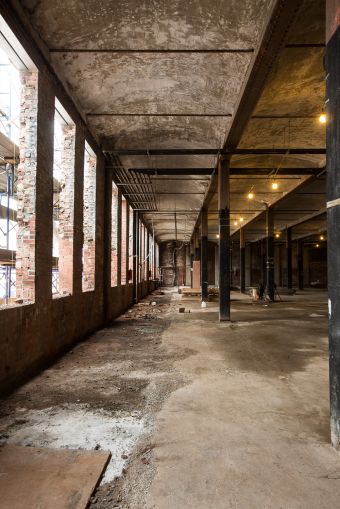 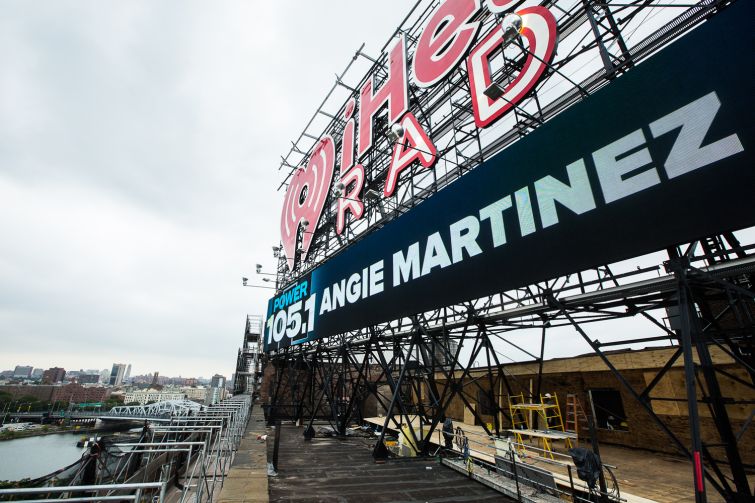 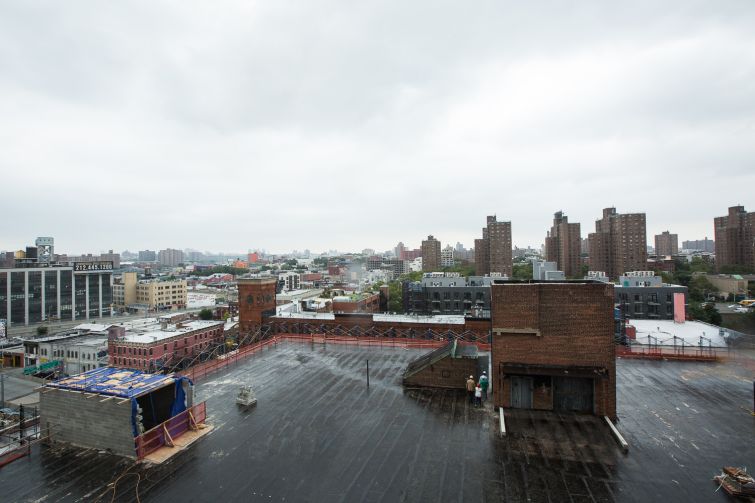 The owners hope to transform the roof of 20 Bruckner into a playground if they rent the building to a school. Photo: Emily Assiran/For Commercial Observer 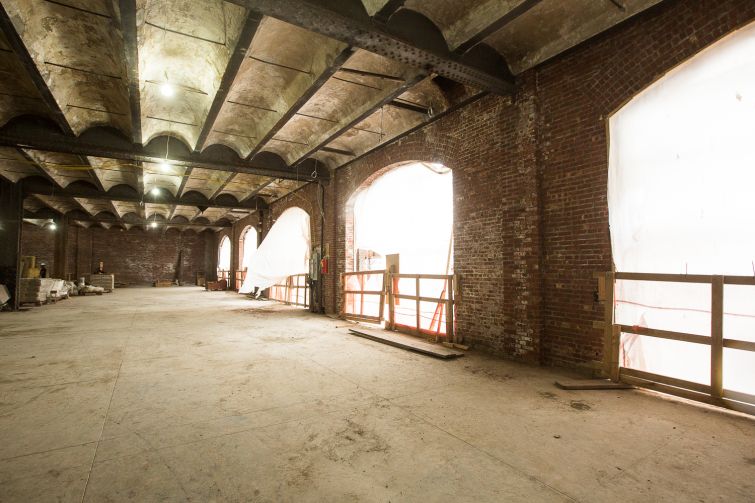 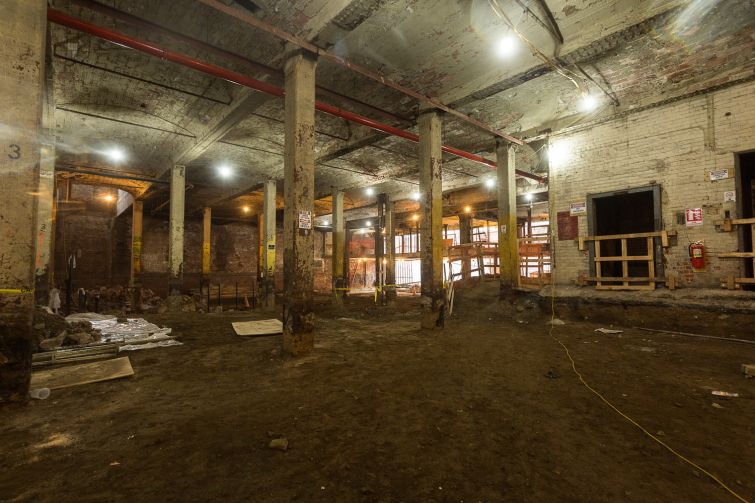 Ceiling heights at 20 Bruckner range from as low as 17 feet to as high as 22 feet. Photo: Emily Assiran/For Commercial Observer
Previous Next

For more than two decades, the former ice factory at 20 Bruckner Boulevard in the Mott Haven section of the Bronx sat vacant. Its past forgotten by many, it had become known to people simply as “The History Channel building” because of the towering advertisement on the roof that was there for 15 years.

The billboard collected enough revenue per year to offset the costs of operating the 200,000-square-foot building, and therefore the Katz family didn’t see the need to renovate the building. The sign was replaced with one for iHeartRadio last year, marking the first change in signage in years.

But after the owning family talked to principals at Maddd Equities about the property, the two started drafting ideas about what could be done there. Now they are converting it for either office use or a private school in a $25 million to $30 millionplan with 19,000 square feet of retail space. (The History Channel billboard’s 14-foot tall letters are still at the site; the developers are hoping to use them in some sort of future branding. And the iHeartRadio sign is staying atop the building.)

“Originally, this was built as an ice house. But we don’t build those anymore today, so I don’t think it will qualify as highest and best use,” Eli Weiss, an executive at Joy Construction who is working with Maddd Equities on his own for the project, quipped to Commercial Observer during a tour of the building. “But in order to facilitate an ice house, you needed to build a very strong structure with elements we don’t use today.”

But beyond just being The History Channel building, it shares a meaty piece of Bronx history with the New York Yankees.

The building was constructed in 1898 and expanded a few decades later by Jacob Ruppert, the brewer, U.S. Congressman and owner of the Bronx Bombers from 1915 to 1939. (He built the first Yankee Stadium in the Bronx in 1921.) The waterfront expansion was to bring blocks of ice easily to Ruppert Brewery on East 92nd Street in Manhattan. (Today the Ruppert Yorkville Towers condominium buildings are on the brewery’s site.)

Ruppert had the distinction of having purchased Yankees legend Babe Ruth’s contract from rival Boston Red Sox, which transformed the Yankees into a powerhouse and put the “Curse of the Bambino” on the Red Sox that would not be broken until 2004.

For history’s sake, Jorge Madruga, the principal of Maddd Equities, tried to obtain Ruth’s 1919 contract, which was up for auction earlier this summer with an opening bid of $100,000, which they planned to hang in the new building.

It sold on June 30 for $2.3 million, according to Lelands Auctions. There were 32 bidders. The seller was actor Charlie Sheen (#winning!).

Contract or not, the four-story building features huge ceiling heights that range from 17 feet on the second floor to 22 feet on the third floor. It also has approximately 40,000-square-foot floor plates, and the developers have already knocked down dividing walls to open up the floors.

In an area on the second floor known as the ventilation room the ceiling heights shot up 40 feet. It was used for exhaust when making the ice, according to the developer and contractor. But the loft-like space had perhaps the building’s only tenant for a while: thousands of pigeons.

A few remnants courtesy of the birds were still noticeable on the floor when CO toured the building.

“The first time I came in here, pigeons owned this building, and this was their coop,” said Ariel Aufgang, a principal of his namesake architecture firm, who is the architect for the project.

Construction began roughly six months ago but is in full swing for a December completion.

The building has three existing elevators: two freight and one passenger. All are being modernized, and the developers will replace one stairwell with a new passenger elevator.

The developers have lengthened the windows to allow more natural light onto the floors and replaced the 54 windows on the brick building. In addition, contractors added angled braces to the iron ore columns to stabilize the building for any future uses or heavy modern equipment that could be used in the building.

“[The building’s] been here how long? More than 100 years? It’s going to be [another] 200 after this,” said Fawwaz Ali, a field supervisor of the project’s contractor, GDI Construction.

The building also has a rooftop deck and a 12,000-square-foot, two-level penthouse structure. If the building does get fully rented to a school—as the group hopes—the tenant can make the roof deck into a playground in the sky. Asking rents for office space throughout the building range in the mid-$20s to $30s per square foot, and $40 to $50 a square foot for retail space.