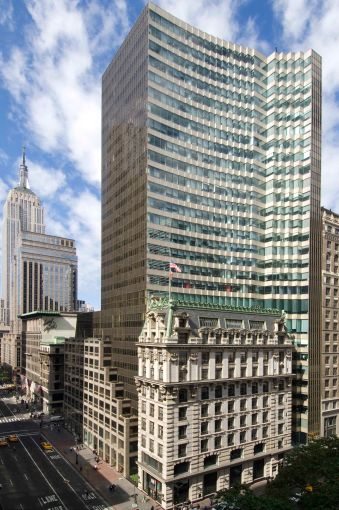 Advisory and analytics company Wood Mackenzie has signed an early five-year renewal for its 10,338-square-foot offices at 452 Fifth Avenue, Commercial Observer has learned.

The company, which serves the oil, gas, metals and coal industries, will continue to occupy part of the 21st floor of the 30-story building between West 39th and West 40th Streets near Bryant Park.

Wood Mackenzie has been in the building since 2012. Its extension begins in January 2018. The asking rent in the deal was not immediately clear. But Popper, a senior vice president at PBC, indicated that taking rents in the building can notch $100 per square foot.

“The Wood Mackenzie commitment not only solidifies the great relationship we have established between ownership and our tenants at 452 Fifth Avenue through stellar management, but also our continued achievement of triple-digit rents and 100 percent occupancy,” Popper said in a prepared statement.

PBC acquired the 865,000-square-foot office tower at 452 Fifth Avenue in April 2010 for $330 million from HSBC in a sale-leaseback deal, as the company announced at the time. It then completed a $45 million renovation of the building, which included a new multi-floor lobby, upgrades to the elevators and new emergency power generators.

The property is still anchored by HSBC, which signed a 548,000-square-foot lease renewal there in April for its U.S. headquarters, as CO previously reported.

The Savills Studley brokers did not immediately respond to a request for comment via a spokeswoman.