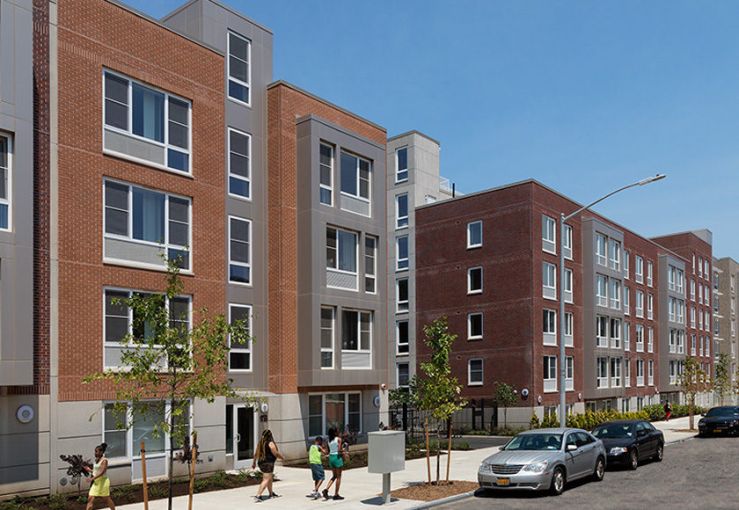 Even as traditional supermarkets disappear in more expensive parts of New York City, grocery operators are paying closer attention to working-class corners of the outer boroughs that desperately need sources of fresh produce. One of those neighborhoods is Ocean Hill, Brooklyn, where the developers of an affordable housing project recently signed a deal to bring in a C-Town supermarket.

The grocery store signed a 20-year lease for 17,721 square feet on the ground and lower floors of a four-and-a-half story residential building at 442 Saratoga Avenue. It will anchor the 135-unit development at the corner of Sterling Place, Saratoga Avenue and Eastern Parkway. Asking rent was $30 a square foot, according to Matthew Gorman of New Street Realty Advisors.

The residential portion of the project will open in February 2018, and C-Town is expected to open next summer.

The building on Saratoga Avenue is the third and final piece of a larger, affordable rental project called Prospect Plaza. The first two phases are already complete and include 249 low- and middle-income apartments, 80 of which are managed by the New York City Housing Authority. The Dattner Architects-designed development occupies roughly three blocks between Saratoga and Howard Avenues in Ocean Hill, a relatively small, triangular neighborhood wedged between Crown Heights, Bed-Stuy and Brownsville.

Gorman and Joshua Gettler of New Street represented the landlord and C-Town.

“We feel strongly that this use will really anchor and enhance the market and provide a good public service to the community,” Gorman said. “There’s limited stores there for people to go to. This is walking distance to the three phases of Prospect Plaza. It’s going to bring employment and high quality healthy products to the community.”

The store also earns the building a tax break through the city’s FRESH program, which awards 25-year tax abatements to markets with fresh produce.

New Street is marketing the remaining 11,215 square feet of retail space along the Saratoga Avenue side of the property and is seeking educational, nonprofit and medical tenants.

Although Commercial Observer recently chronicled the demise of traditional grocery operators like C-Town in the five boroughs, that narrative doesn’t necessarily apply in neighborhoods like Ocean Hill, which have long struggled to attract quality supermarkets.

It’s easier for traditional markets to move into areas with relatively cheap retail rents, said Edward Gevinski Jr., who focuses on investment sales in southern and eastern Brooklyn at Cushman & Wakefield’s capital markets group. Typical asking rents in Brownsville and Ocean Hill hover around $30 a square foot. That’s a huge discount compared with average rents of $129 a square foot along Seventh Avenue in Park Slope, $326 a square foot along Fulton Street in Downtown Brooklyn, or $102 along Flatbush Avenue in Prospect Heights, according to the most recent Brooklyn retail report from the Real Estate Board of New York.

He pointed out that it’s easier for stores to find larger square footage in tertiary submarkets like Ocean Hill, Brownsville and southern Brooklyn.

It helps that grocery stores are an attractive amenity for tenants and landlords at residential developments like Prospect Plaza.

“They’re building a huge affordable development here so you have built in customers or clientele,” he added. “So it’s easier for people to pop in, get groceries and go up to their apartment.”