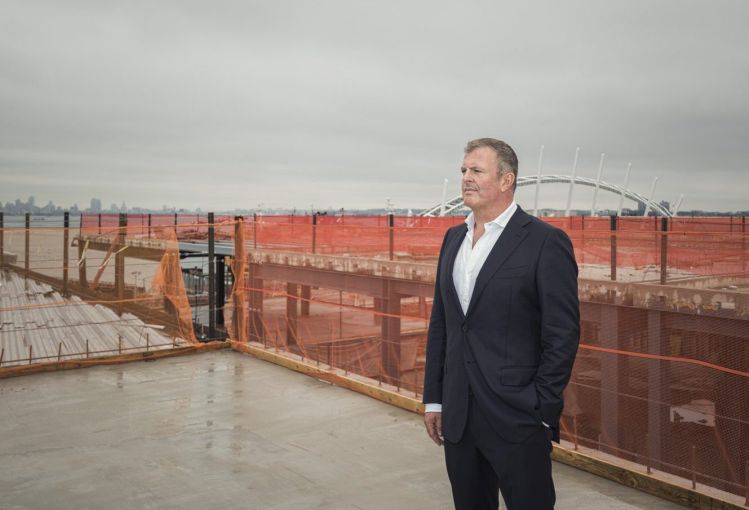 While Douglas Elliman has become virtually synonymous with the world of high-end, luxury residential real estate in New York City, the brokerage has sought to grow its presence in the world of commercial real estate in the recent years. Douglas Elliman Commercial, which launched in 2014, features a roster of brokers specializing in everything from office and retail leasing to investment sales.

Michael Brais is among the talents who have bolstered the firm’s ranks in the commercial real estate department. The Douglas Elliman Commercial broker joined the company in 2015, and has parlayed a diverse career—one that has included stints as a residential broker at Benjamin James Real Estate and as a Brooklyn cocktail bar owner—to carve a niche for himself as Elliman’s top food-and-beverage retail dealmaker.

The 48-year-old Brais is currently the exclusive food-and-beverage broker for Empire Outlets, the 1.1-million-square-foot commercial complex on Staten Island’s North Shore waterfront. The BFC Partners-helmed development, which is slated to open next March, will comprise 350,000 square feet of retail including roughly 50,000 square feet of food and beverage offerings.

Brais spoke to Commercial Observer last month about Empire Outlets, his path into the world of retail, Elliman’s commercial operation and the state of the food-and-beverage industry.

Commercial Observer: You’ve had a pretty varied and diverse career, from working in residential real estate to opening your own cocktail bar. How did you end up working for Douglas Elliman Commercial?

Michael Brais: I had worked with Douglas Elliman on-and-off for several years [as a residential broker] and had a lot of relationships throughout the company. It is a juggernaut in the residential world, and a very cool company with a great culture. When I heard there was going to be a commercial division, it piqued my interested.

I had been focusing a lot on restaurants. I ended up teaming with someone very talented in the cocktail world, [Flatiron Lounge owner] Julie Reiner, and we opened Clover Club in 2008 [on Smith Street in Carroll Gardens, Brooklyn]. The cocktail craze, in New York and the whole world, is a big thing. I designed the space myself and that, with the experience of developing a really successful business, was like a master class in retail development. Clover Club received and still receives an extraordinary amount of critical acclaim. I sold my share in 2014, so I was looking for my next move.

I spent some time renovating old, architecturally beautiful houses down in North Carolina. My brother lives there, and it was a way of sating my love for development. I was much more focused on doing pure commercial work and getting into development than doing any type of residential brokerage, which I’d done on-and-off since 2000.

Through relationships in the company, I found out about this startup commercial division. When I talked to the guys within DEC, they had a commercial office leasing presence and an investment sales presence, but really not much in the way of retail. Given my experience in food-and-beverage, it made sense to jump in and focus on that work, specifically.

What is your working relationship like with Elliman retail broker Faith Hope Consolo and her team?

Faith is well-established; she’s just a phenomenal legend in the business, but kind of operates as her own entity and is really fashion-focused. We’re teamed up now; I brought her in at Empire Outlets. We think of ourselves as an all-star team—food and fashion, we have those two areas covered.

But between her and the other guys at DEC, I did see a gap in the food-and-beverage and hospitality part of the brokerage. Louis [Puopolo] and Alex [Furst] focus on a lot on investment sales. Jim and Pete Gross, they’re the office guys. We’re all brokers; we can do any kind of real estate, but that’s their area of focus.

I was wary of pigeonholing myself as a restaurant guy, but realized in general that there was a gap in the market—people who spoke the restaurant language, understood the costs and what kinds of brands are going to succeed in the market now. I really leaned into it.

Let’s talk about Empire Outlets, which has brought a lot of attention to the Staten Island waterfront. What has it been like to work on that project, and what are some of the challenges you’ve encountered?

It’s fantastic. It’s been a unique challenge to kind of bridge the perceptive gap between the rest of New York City and Staten Island. It was obvious when they brought me on that we needed to stay away from anything too corporate and had to lean into the way people want to experience food and beverage.

We looked to go after top boutique operators. Our food hall team [MRKTPL, led by Manny Del Castillo and Jamie Hinojos] is the original creative team behind Gansevoort Market [in the Meatpacking District]. Not the current team; the original creative team that had the proof of concept, and then went in another direction and created their own brand. They are incredibly creative, incredibly connected guys. We’re going to have 30 different kiosks, and people will be able to walk through this phenomenal 15,000-square-foot space. That’s been our anchor for food and beverage.

From there, we signed the top-rated barbecue in the city, Mighty Quinn’s. We signed the esoteric energy of Two Boots; they also have an outdoor space and do broad programming, live music.

We also had large space where we wanted to get multiple experiences under one roof, so we found this great Japanese steakhouse group, Wasabi Steak & Sushi. It’s run by these brothers from New York, but the New York market was so tricky that they started it in Ohio, where they went to school. They were looking for a way to get back into New York City, and Empire Outlets was the perfect opportunity. They’ll have hibachi, space for parties and events, an Asian cocktail bar and a quick sushi bar.

Where does retail leasing stand at Empire Outlets? How much space do you have left, and what are you trying to put there? And what are asking rents like?

For food and beverage, we’re nearly 80 percent leased and got just a few spaces left—about 12,000 square feet. We’re talking to a great beer garden operator, a high-end Mexican tequila bar operator and a seafood operator. Those are the three concepts we want to nail down. We have one spectacular waterfront suite we’ve been holding onto; when you get up there and look out at the view of the harbor and the city, it’s pretty exciting.

Asking rents are in the low $100s per square foot. Deals are being done around that range, depending on scale, size, the location and who the tenant is.

With all the issues currently plaguing brick-and-mortar retail these days, where does food and beverage fit into the current retail landscape?

A lot of people are spending a lot of time and energy to figure out the delivery business and what the next step is going to be. You’ve got order-only restaurants opening, which is fascinating to me. So there are people very focused on the trends, [such as] people eating at home more.

I think food halls are a fascinating thing to look at, because it’s an elegant solution. You’ve got tons of interesting, creative people who are looking to do brick-and-mortar food concepts, and the kiosks are accessible to them. You put them all together, and you’ve got something that feeds into how people want to live now.

You do see these costs for [opening] restaurants being a huge barrier to entry. Labor costs are going up. Restaurants always have their struggles. But people eat every day.

In general, what’s your take on the current brick-and-mortar retail market at this moment?

It’s somewhat deal-specific; you can still easily go around the city and get a bunch of stuff that’s really out of touch with today’s reality. Those spaces are sometimes constrained by their financial underwriting, and they’re taking more time [to lease]. There are landlords that have flexibility with price points and can get creative, such as packaging tenant improvement money.

Something to bridge the gap [between asking and taking rents] is percentage rents. It’s based on sales; you start at a lower base, and if sales get to a certain point, the tenant will pay more [rent]. If the tenant is doing well, the landlord also does better. If the landlord picks the right operator and the right use, they can participate in an upside they wouldn’t have been able to get their hands on. If it’s done well and properly, there’s a great opportunity. But you have to have the right broker to pull it off.