Starbucks Will Open Its First Location in Bed-Stuy 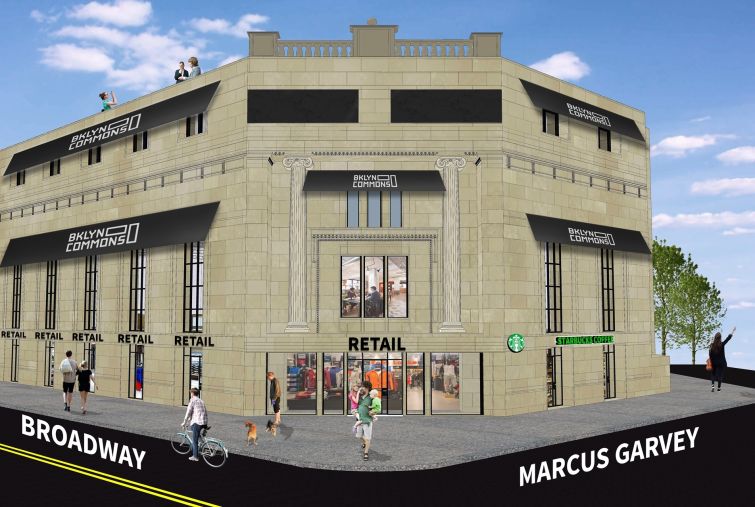 Rendering of 774 Broadway. KicksUSA will be to the far left. Image: CoStar Group

One retailer that has been noticeably absent from the Bedford Stuyvesant section of Brooklyn is Starbucks.

That will change in the second quarter of next year when a 2,500-square-foot Starbucks will open at 774 Broadway at the corner of Marcus Garvey Boulevard, the building where coworking company Bklyn Commons has signed on for 30,000 square feet, Commercial Observer has learned.

The coffee giant has signed a 10-year lease, according to a development representative for Starbucks Coffee, who asked to remain anonymous. He declined to provide the asking rent.

“This is a strong market in Brooklyn,” the rep emailed. “It is a high-density area within the retail corridor for the Bed-Stuy market, adjacent to a regional hospital [Woodhull Hospital] and near the subway, all which help drive traffic for our stores. We are also expanding our presence in Brooklyn and this is a market not currently served by our brand.”

The Starbucks representative called the Bed-Stuy Starbucks a “community store.” It will be similar to the one that opened at 8900 Sutphin Boulevard at 89th Avenue in Jamaica, Queens last March, the first in Starbucks’ nationwide initiative “to deepen investments in at least 15 similar communities across the U.S.”

The community stores include a space, which varies in size by location, for training.

“Each location has a different, locally relevant nonprofit organization-partnership that provides job training and skills building programs for young people between the ages of 16 and 24 in the area who aren’t in school or working,” a company spokeswoman emailed. “The training covers the basics of customer service, barista skills and food-safety certifications, amongst other areas, to prepare local youth for jobs with Starbucks or other businesses.”

Starbucks has said it plans to open the remaining similar stores by 2018, “each of which will hire 20 to 25 people, work with local minority-owned vendors and suppliers and collaborate with local nonprofits.” Five community stores have opened since the one in Jamaica, Queens, the Starbucks spokeswoman said.

The building at 774 Broadway is four stories and is comprised of 36,300 square feet. It has been dubbed the Fat Albert’s Warehouse for the 24,000-square-foot discount department store it houses. The store’s proprietor, Albert Srour, who has owned the building since 1986, is ready to retire, said Diana Boutross of Cushman & Wakefield, who represented both sides in the deal.

She said that the neighborhood is ripe for a Starbucks.

“We see a lot of our customers there and a lot of young professionals moving into the area,” said Boutross on behalf of Starbucks. Plus there is the hospital, she said, and “hospitals have historically been a good tenancy for us.”